Museum has countless connections to the University of Denver

In May of 1981, the 76-year-old Vance Kirkland lay dying in a Denver hospital. Knowing his days were dwindling, the city’s most famous modern artist wanted nothing more than to paint.

Kirkland completed that painting, a pulsating installment in his famous dot series, and then moved on to still another canvas, which he was diligently confronting when his full and productive life came to an end. 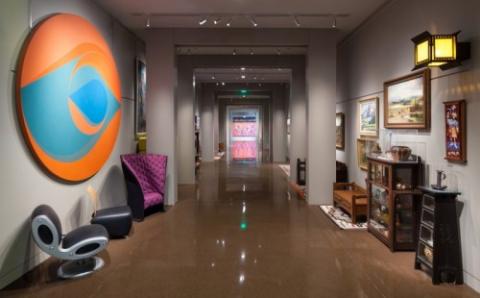 For Kirkland fans like Grant, the Golden Triangle location puts the artist right where he belongs: at the center of a vibrant museum scene increasingly known for its innovative exhibitions and cultural cachet. And Kirkland’s name promises to burnish that cachet — after all, aficionados from all over the world admire his surrealistic watercolors and mind-blowing abstractions of nebulae and galaxies. Colorado’s art world, meanwhile, celebrates him as an indefatigable champion of creativity and craft. And in Denver and at DU, he is remembered for founding the School of Art and Art History in 1929.

But no one remembers him as well as Grant. As the museum’s director, self-described “crazy curator” and visionary, he serves as the keeper of Kirkland lore. His parents were the artist’s good friends, and Grant grew up in Kirkland’s milieu, hanging out at his house and learning about painting, sculpture, music and artful living.

Upon Kirkland’s death, Grant inherited most of the artist’s estate — a legacy he converted into the original Kirkland Museum, located at the artist’s studio in Capitol Hill. Over the years, Grant built the museum’s collection and dreamed of acquiring additional space for showcasing the art.

Grant shared that dream with Merle Catherine Chambers, his former wife and the donor behind DU’s Chambers Center for the Advancement of Women. Chambers, too, thought the collection needed breathing space and offered to help underwrite expansion plans. She also suggested a move to the Golden Triangle, an idea that Grant initially greeted with horror, assuming that it meant abandoning Kirkland’s quirky work space. “‘We can’t move down there,’” Grant recalls telling her. “’I won’t leave the studio.’ And she goes, ‘Pick it up and move it.’”

Which, with support from the Merle Chambers Fund, is exactly what they did. The studio move took place in fall 2016, when the arts-and-crafts-style structure was hoisted from its Pearl Street perch and transported ever so slowly down busy East 13th Avenue. The brick building was then positioned at the north end of the new museum site, where it will offer visitors insight into how Kirkland approached the blank canvas.

The museum offers more than a retrospective of Kirkland’s work. It also displays an international decorative art collection representing the major design periods from 1875 to 1990. The galleries and an expansive promenade also feature a Colorado and regional art collection with over 7,000 works by more than 700 artists, among them DU’s own Maynard Tischler, a longtime faculty member known for his ceramics. (The facility has countless DU connections; four of its staff members are alumni.)

Kirkland, Grant says, was known for his high standards and for bringing artists of national stature to teach at DU and work in Denver. In doing so, he transformed what had been a small art department offering non-credit classes into a school staffed by professionals focused on educating professionals.

Among those teaching pros were a number of women, many of whom are represented with artworks displayed at the Kirkland. Grant takes special pride in this, given that Kirkland himself always insisted on supporting women artists, hiring them at DU even when the move was certain to stir controversy. Several times, when Kirkland hired women teachers, he received hate mail excoriating him for giving a man’s job to a woman. But, as Grant remembers, “He said, ‘To hell with it. I’ll hire her.’”

For Grant, the new museum pays tribute not just to Kirkland’s career, but to his support of Colorado’s creative community. What would Kirkland think of the facility? Grant can’t be sure, but, he says, “I think he’d be pleased that we are showing so many of the Colorado artists he championed.”