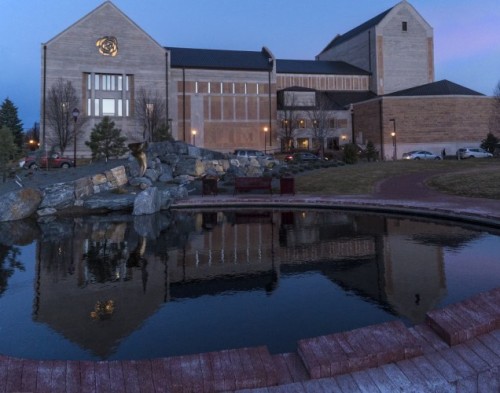 Fans of jazz and dance will find a lot to love about the 2017–18 Newman Center Presents series, which kicks off in September at the Newman Center for the Performing Arts on the University of Denver campus.

Announced Monday, the forthcoming season also includes the debuts of two new series, one offering kid-friendly concerts for families and the other presenting matinee performances for K-12 students.

The programming reflects the priorities of Kendra Whitlock Ingram, who has served as executive director of the Newman Center since November. “My predecessor, Steve Seifert, had done a really good job building an audience for dance and jazz, so I wanted to be sure to continue that tradition,” she says, noting that the DU IMPACT 2025 strategic plan and its calls for inclusive excellence and community engagement also inspired her choices. Planning the season, she says, was about “making sure that we had artists that were going to bring in different segments of the community that may have not been here before.”

On the jazz front, the Newman Center welcomes Grammy-winning vocalist Gregory Porter (Nov. 4); a special holiday program from hard-driving salsa band Spanish Harlem Orchestra (Dec. 7); vocalist Tierney Sutton, performing songs from her album “The Sting Variations,” featuring her interpretations of Sting tunes such as “Message in a Bottle” and “Fields of Gold” (Jan. 11); drummer Antonio Sanchez, who will perform the score to 2015 best-picture winner “Birdman” (Feb. 22); and trumpeter Terence Blanchard, appearing with his E-Collective band (May 3, 2018).

The season’s dance lineup is anchored by the iconic Martha Graham Dance Company, staging a mix of classic pieces and new works (Oct. 7). Other scheduled performances include the Denver debut of Seattle-based Spectrum Dance Theater, which will present “A Rap on Race,” a dance-theater piece exploring a historic conversation between James Baldwin and Margaret Mead (Jan. 26); the Denver debut of the L.A. Dance Project (March 10); and the Nrityagram Dance Ensemble, which specializes in classical Indian dance (April 6, 2018).

The Newman Center reaches out to young music lovers with its two new concert series. The Family Series will feature programming geared for children ages 6 and older, as well as their families. It welcomes violin/viola duo Black Violin on Sept. 28–29; Erth’s DINOSAUR ZOO LIVE, a theatrical performance featuring an eye-popping collection of amazingly lifelike dinosaurs and other creatures (Nov. 11); the Cashore Marionettes (March 23–24); and ODC Dance’s presentation of “The Velveteen Rabbit” (April 27, 2018). Families can arrive one hour early to experience the Newman Center KIDZONE, which will feature everything from coloring to face painting.

Another new offering, the Student Matinee Series, brings students in grades K-12 to the Newman Center for one-hour performances during the school day. Homeschool students are also welcome attend. Pricing and more information for teachers and school administrators will be available in August 2017.

Sept. 13: Pedrito Martinez Group (Partnership with the Biennial of the Americas)

May 3, 2018: Terence Blanchard and the E-Collective