One of the Girls

Tim Bouraoui gives back as a robotics mentor at St. Mary’s Academy 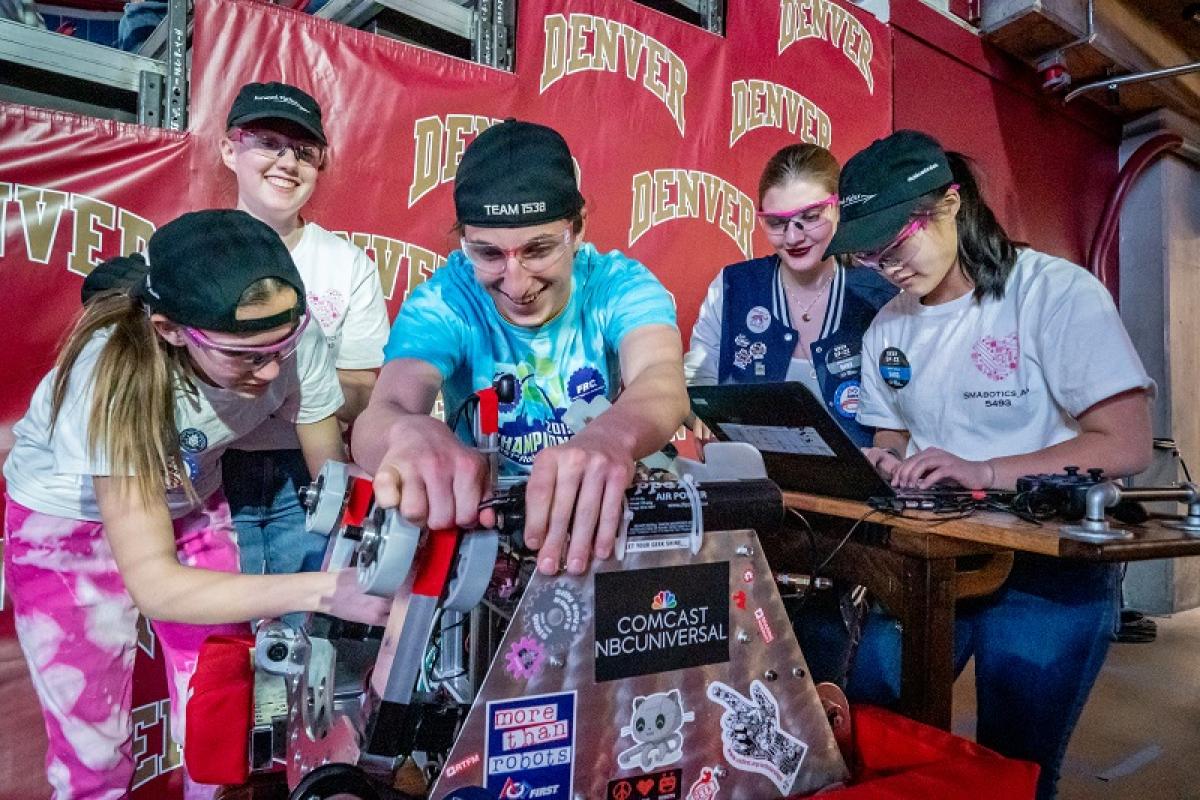 Magness Arena is in such a frenzy, the eye doesn’t know where to focus. The main attraction is the annual FIRST Robotics competition that brings Colorado high schoolers to the University of Denver campus. But the stands are a palette of painted faces, dancing mascots and screaming students.

As robot 5493 enters the fray, eyes dart to the soprano cheers rising from the team in the white shirts that scream even louder: “Silly boys, robots are for girls.”

“Isn’t that awesome?” a mother from a competing school says to a friend. “It’s an all-girls team.”

The SMAbotics team, incorporating an acronym for Denver’s St. Mary’s Academy, isn’t the most established team here. Nor is it the most successful. But it is one of the most spirited.

One of the students has just spotted the team’s biggest cheerleader. “Tim!” she yells, beckoning Tim Bouraoui, a junior at DU’s Ritchie School of Engineering & Computer Science who, while not a female, has certainly become one of the girls.

For the last eight months, Bouraoui, a computer engineering major, has devoted up to 10 hours a week to helping the team. He’s a former high school robotics champion and a volunteer mentor, bringing his love for the program to 25 girls who are eager to soak it up.

“I’m just proud of them,” Bouraoui says. “I want [them] to go show up some of the other teams that are all guys.”

Before the story goes any further, Bouraoui wants to set the narrative straight.

According to the National Girls Collaborative Project, despite making up half of the U.S. college-educated workforce, women only represent 29% of professionals in the science, technology, engineering and mathematic (STEM) fields. That’s a problem, he says, and he’s thrilled to be exposing the team to things like computer-aided design.

But as a male volunteer for SMAbotics, Bouraoui also doesn’t want to be seen as a gatekeeper, granting young women access to the field he loves. “I am enabling them,” he explains, “but I’m just enabling them as engineers — not as women in engineering.”

That means Bouraoui’s role is multifaceted. He’s a teacher, a friend and an ambassador for the sciences. He’s watched the team take a standard set of parts and design a robot from scratch. And though some may wonder if the experience is different working with an all-girls team, Bouraoui says he has hardly thought twice about it. “The robot gets called ‘cute’ a lot more than it did on my [high school] team,” Bouraoui says, laughing, but otherwise there’s no difference.

Though the girls on the team certainly notice a difference with Bouraoui’s presence. “He's always supportive,” says Lizzie Cave, a sophomore. He's very comforting. He has knowledge about everything.” Adds junior Jenna Cerasco: “He's got a great presence. He's fun to be around and talk to.”

Bouraoui found SMAbotics while volunteering at last year’s FIRST competition. The team didn’t always have the highest-scoring robot, but their attitudes were second to none. Wanting to get involved, he contacted the team’s head mentor, Dave Gesler (BS ’91, MS ’91), who in addition to holding two DU degrees also had worked at the DU-based Denver Research Institute.

“Tim is an amazing guy and he’s just awesome with the girls,” Gesler says of Bouraoui. “They connect with him because he’s not that far away from them [age-wise], but they see where he’s at and what he’s doing. And they listen to him and they are really interested in asking him questions about his experience with engineering school, because a lot of these girls plan on going onto engineering at a collegiate level.”

The team’s future is what excites Bouraoui the most. SMAbotics posted a very respectable result at the Colorado regional competition, placing 25th out of 52 teams, and interest at St. Mary’s Academy is growing.

Bouraoui will be back next year to provide the team with guidance and mentorship in between class, homework and jobs in the DU Maker Space and with a pair of student technology startups. In addition to volunteering, he is also helping organize a weekend event in April that will bring middle school girls to DU to learn valuable STEM skills.

“As an engineer and someone who wants engineering to continue to grow, it doesn’t make sense to me to only use half of our brain power and cut out the entire female side of things,” he says.

You can be sure Bouraoui will be a loud voice for the cause, just as he is at the Ritchie Center competition when the girls ask him to lead a cheer. He leans back, cups his hands around his mouth and yells: “How do you feel?”

“We feel good!” they scream in response, clapping. “Oh, we feel so good!”