Judy Marquez Kiyama, a professor in the Morgridge College of Education, was a first-generation college student whose introductory exposure to her alma mater, the University of Arizona, was through a six-week summer bridge program for first-generation students, low-income students and students of color. Later the assistant director of that same program, Kiyama now conducts research on the high school-to-college transition experiences of these populations. She also studies the role families play as sources of cultural support.

Q: How important was it for you to take part in the summer bridge program at University of Arizona?

A: It’s embedded into the value system of what I do and why I do it — recognizing that without those same programs, I would not have been successful. My family didn’t have the information or the financial resources to support me in that way, so I relied on those support systems from the institution and was lucky enough to work with them as a professional to really understand the impact that they can make, the space they can create for students to have a sense of belonging and a sense of home on college campuses.

Q: One of your current research projects looks at orientation programs at multiple institutions, particularly as they relate to first-generation students and their families. What have you found? 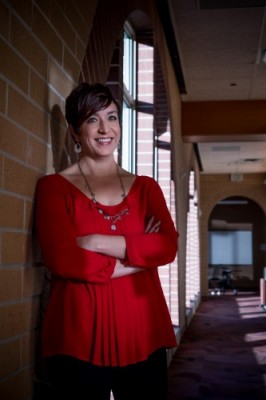 A: In K-12, we hear that education is a partnership. It’s a partnership between the families and the communities and the schools to ensure student success. Families are not just welcomed into the schools, but are often highly encouraged to get involved: PTAs and field trips and parent-teacher conferences. But then [parents] get to higher education, and they’re told, “Guess what, you’re not supposed to be here anymore.” Of course kids are transitioning into adulthood and developing in different ways and need to make independent decisions, but to assume that first-generation families, especially, don’t want to be engaged anymore, or students who come from very collectivist backgrounds and orientations — often communities of color — that they’re not going to still connect with their families or rely on their communities, is really antithetical to what we know about family engagement and the role it plays in helping to build success for students.

Q: What recommendations have you made to these schools as a result of your research?

A: We talk less about specific recommendations and more about some of the wonderful strategies that some of the institutions are implementing, everything from having designated sessions at orientation for first-generation families and students, having specific welcomes or days — parent welcome days during the year, parent sessions at orientation, designating a time when they talk about what it means to be first generation, and offering orientations in families’ home language. Often families are not invited to advising sessions, and of course we understand why, but there was one particular college that had coffee days during advising sessions, so families could pop in and be part of the process. Not sit in the actual advising session, but at least be present to ask questions and see that they were welcomed on campus. A big one we learned about was institutions that took orientation into the home communities of the families — some who couldn’t travel or some who had a community hub that they all came to often, so the information was presented in a place that was already comfortable for them.