As of July 31, the University of Denver has never had an outbreak of COVID-19. The CDPHE defines an outbreak as two or more confirmed cases Of COVID-19 in a “facility group” with onset in a 14-day period. Since April 12, we have had 8 confirmed positive cases at DU. None of these individuals worked in the same building or group on our 125-acre campus. The last reported positive was July 29.

The daughter of a Pioneer gymnast and diver, Nicole Good will be the 10th member of her family to graduate with a DU degree 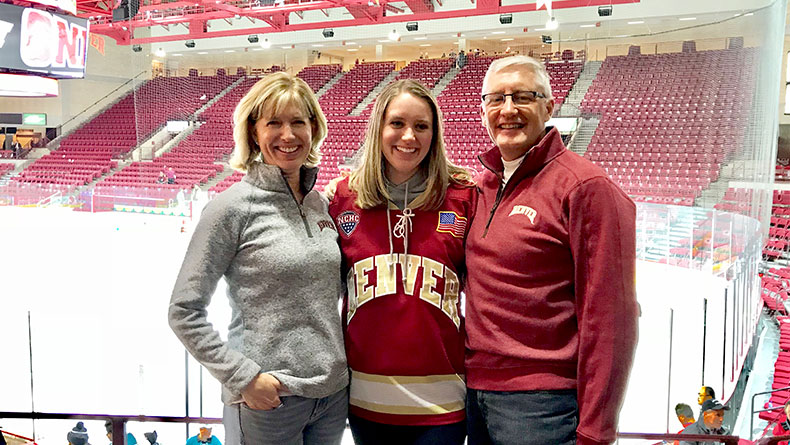 No way was Nicole Good coming to the University of Denver. There was just nothing new and exciting about it.

For one thing, it was too close to Greenwood Village, where she had grown up. The gymnastics meets she had once watched with her mom, a former DU all-around star, had lost some luster. And how many times had she heard her dad’s stories about his Pioneer diving exploits and his tiny college house near the Ritchie Center’s El Pomar Natatorium?

“It’s not for me,” she remembers thinking. “I can do something different. And then going through the college search I decided to apply, just as my in-state school to keep it open.” 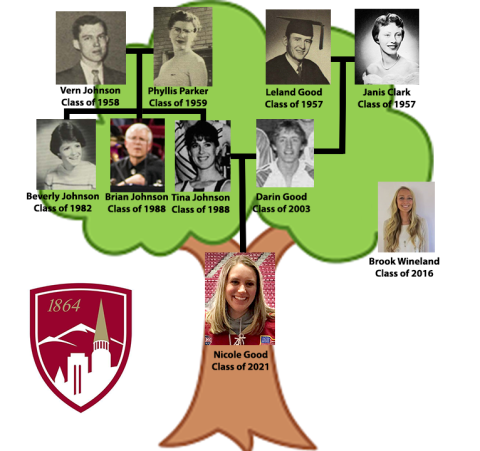 Was it fate that Good, now a sophomore studying accounting, would end up on the DU campus? Maybe not. But the more she learned about her family’s long history at DU, the more enrollment felt like an odd genetic destiny.

The Good-Johnson clan has now sent enough students to DU to field a Pioneer soccer team. Last fall, Nicole became the 11th family member to don Crimson and Gold and would be the 10th to graduate, following in the footsteps of all four of her grandparents, both her parents, an aunt, two uncles and a first cousin. That’s not to mention her beloved distant relative, Marilyn Girouard, who created an endowment to fight alcohol and substance abuse.

“It’s funny how it’s really the best fit for me personally, and it has nothing to do with my family,” Good says of DU. “It was the best program hands down, and I absolutely love it here. I’m so happy with that choice.”

A farmer plants the seed

When Vern Johnson's (BS ’58) parents immigrated to the United States from Sweden, their son wasn’t content to live a farmer's life on the plains of Greeley. A high school program provided the opportunity to visit the University of Denver campus. There would be no going back.

To put himself through school, Johnson worked as a butler for a family in the Cherry Creek area. He was proud to be the first from his family to attend and graduate college. Johnson and his wife, flutist Phyllis Parker (BM’59), didn’t go on and on about their alma mater, but their four children never doubted the role it played in their lives.

“He was really grateful to DU and long afterward continued to stay connected,” said Tina Good, née Johnson (BSBA ’88), Nicole Good’s mother. “We knew that and probably knew that DU would be a part of our life going forward.” 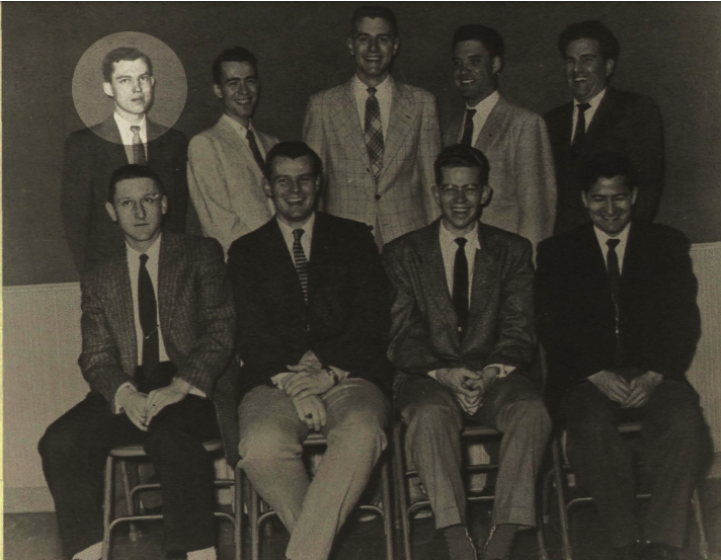 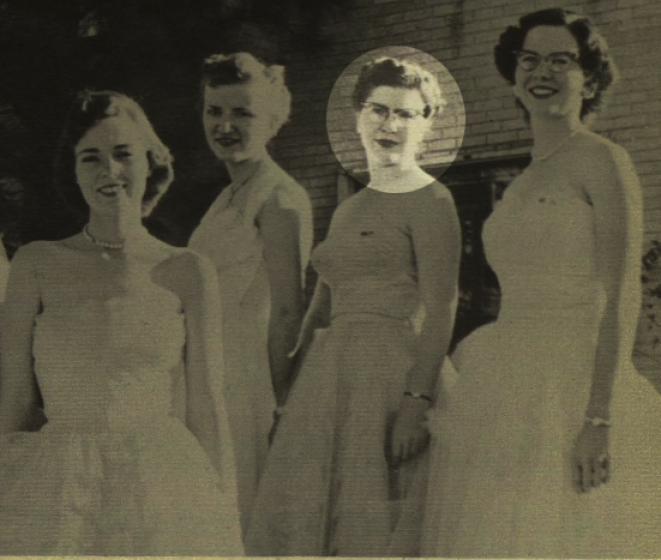 Phyllis Parker, with her Alpha Gamma Delta sorority in 1958 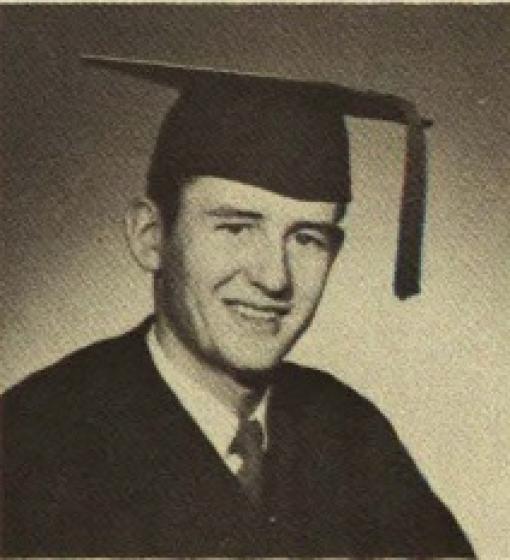 Leland Good in his 1958 senior photo 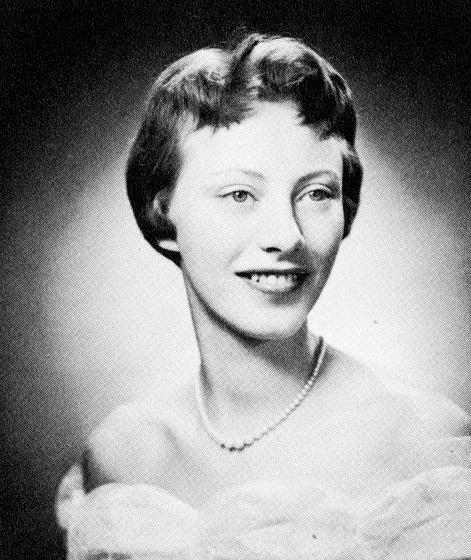 Janis Clark earned an associate degree from the Colorado Women's College in 1957. 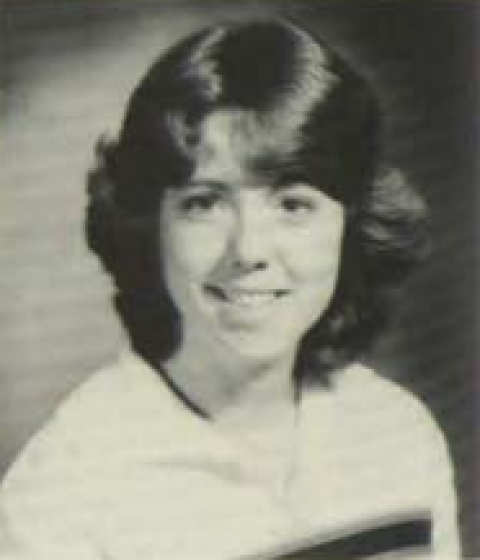 Beverly Johnson graduated with an economics degree in 1982. 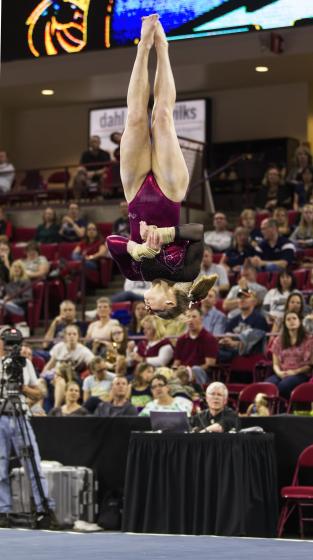 Brian Johnson, below at the music booth, has been DJing the DU gymnastics meets since he came to campus 30 years ago. 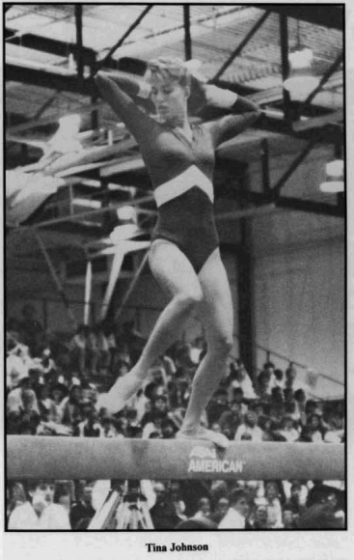 Tina Johnson walked on to the gymnastics team and eventually became a two-time MVP and Female Athlete of the Year. 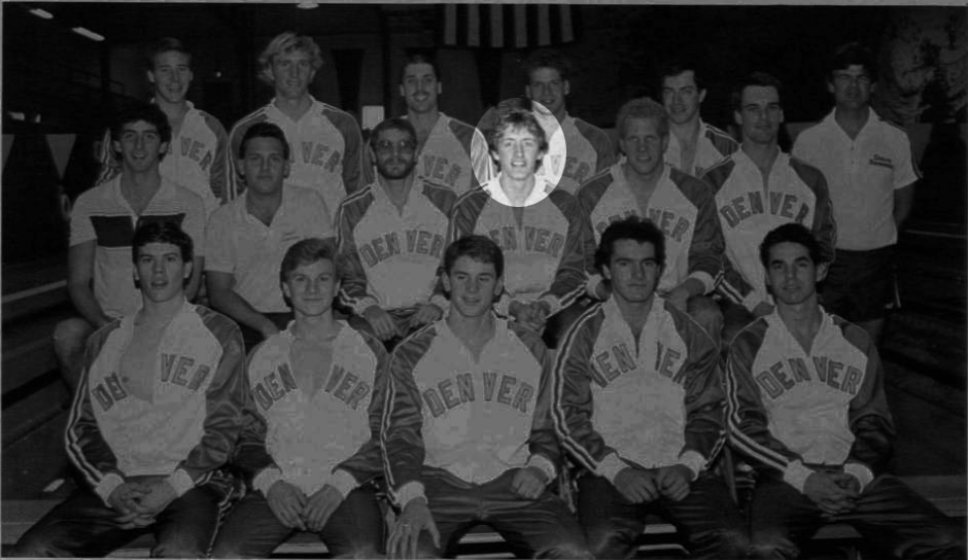 Darin Good with the 1987 men's swimming and diving team. After leaving school early to start a business, he returned to earn his degree in 2003. 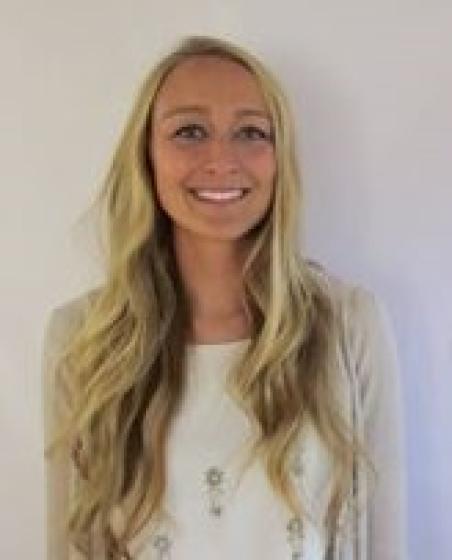 Tina says her parents never pushed any of their children to continue their Pioneer legacy, but when the time came to pursue higher education, each found their own path to campus. For Tina, the draw was an excellent gymnastics team, which she walked onto in 1984. Her older sister Beverly (BSBA ’82) also had briefly been a part of the team as she pursued an economics degree. After two years of college elsewhere, her older brother Brian (BSBA ’88) transferred to DU, where the self-described “wandering kid” found his place and a passion for playing music at his sister’s meets — a duty he still performs for the gymnastics team 30 years later.

By the time she received her diploma, Tina had earned a scholarship, was twice named the team’s MVP and in her senior year captured Female Athlete of the Year honors. But it was during her freshman year that a friend introduced her to the man who would extend her Pioneer family.

Darin Good (BSBA ’03) was a member of the swimming and diving team whose own parents, Leland Good (BSBA ’57) and Janis Clark (who earned an associate degree from the Women’s College in 1957) had met on campus. Seven years later, Tina and Darin wed and began to realize the literal Pioneer family they had created.

“We never even really thought of it until we had kids of our own,” Tina recalls, “and then you start dreaming together and you go, ‘wow! Oh my goodness. DU really has a presence in our life, doesn’t it?’”

When the time came for Nicole Good to select a school, she says she felt no pressure from her parents.

“I’m glad to hear that!” Tina laughs, “because [Darin and I] we were both secretly going ‘pick DU, pick DU.’” The family tradition is one thing, but Tina and Darin, a regular guest lecturer at the Daniels College of Business, say they knew their daughter would emerge with the skills required to lasso a job in a competitive market. The University’s alumni network and community connections are tremendous advantages, Tina adds.

“Every single one of us in the [family] have had very, very different experiences at DU,” she says. “But [they’ve all been] very positive.” Adds Nicole: “I think we’ve had pretty different experiences, but we share that pride of the amazing education we got and the things we can do with that.”

Nicole prefers to downplay her family’s long association with DU. She has never felt the need to “carry the torch” and is much more content describing the tight-knit community and her close relationships with her professors.

But she can’t ignore what her Uncle Brian describes as the “overflowing pride” that comes with the legacy. It’s the way her parents carry themselves when they return to campus.

The Goods say they have never been prouder to be graduates. They delight in the fact that Nicole has sat in some of the same lecture halls as her parents, but they also beam at the way the campus has evolved.

“It’s part of our history,” Tina says. “And to see that continue to grow and become what it is today, you’re proud of your alma mater. It just makes you feel like you want to stay super connected.”