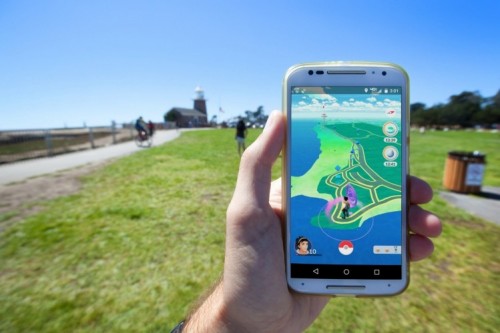 Love it, hate it or know nothing about it, Pokémon Go is taking over mobile devices and neighborhoods all across America.

Pokémon appear anywhere and everywhere throughout the game — college campuses, gyms, restaurants, parks and even hospital delivery rooms. In fact, a few places on DU’s campus have already been invaded by the virtual creatures.

Since its launch July 6 on IOS and Android devices, the game has become a phenomenon — so much so that it’s leaving other popular apps in the dust. According to data from the website SimilarWeb, just two days after its launch the game had already been installed on more than 5 percent of all Android devices and has been installed more times than the dating app Tinder.

Additionally, a staggering 60 percent of those who have downloaded the app are using it on a daily basis, and it’s poised to match or surpass Twitter for the amount of active daily users. Those users are spending an average of 43 minutes per day on the app, which is more than Instagram, Snapchat, WhatsApp and Messenger.

There are reports that the game may even be good for your mind and body, as it forces players outdoors and increases exercise — even if unintentional. But with all the hype and fanfare surrounding the game, will it last? Is this simply a gaming fad or a long-term trend?

“Given the kind of response we’ve seen from this game, I suspect that other companies will try to follow Nintendo’s example. However, as with most things related to technology and especially games, this isn’t a simple matter of making an augmented reality game and suddenly profiting,” says Chris GauthierDickey, associate professor and director of game development programs in the University of Denver’s Department of Computer Science. “Pokémon has been around for 21 years, already has a huge following of fans and has been the subject of both physical and digital games, movies and TV series during this time. Their fan base alone was enough to make this a successful game.”

GauthierDickey, who plays the game himself, says the interesting part is how it has reached such a broad audience, and that’s something the gaming industry will definitely examine further.

“I think you’ll see some developers try and fail to recreate the Pokémon Go phenomenon,” he says. “But I also think as with highly successful games like this, you’ll see other games try to figure out what can be done with AR that hasn’t been done or how they can improve on the Pokémon Go model.”

The popularity of Pokémon Go is no surprise to GauthierDickey, and he says it comes down to two reasons.

First, access to the game is free and easy. In the past, Nintendo — one of three copyright owners of the game — only released Pokémon on its proprietary hardware. Releasing the game via mobile devices opens the access, thereby allowing more users, especially new ones, to play Pokémon without owning a Nintendo-based product. Second, the popularity of the game can be attributed to the creative use of augmented reality and its use of location-based gaming.

“The clever part in Pokémon Go is the use of locations to determine where Pokémon might be ‘caught,’ encouraging players to explore their neighborhoods,” GauthierDickey says. “What child didn’t enjoy hide and seek? In essence, Pokémon Go is a giant game of hide and seek that rewards you for every Pokémon found, fulfilling some of that childhood fun we remember.”

With that popularity has come some backlash. USA Today has reported that some sites, such as Arlington National Cemetery and the United States Holocaust Memorial Museum, are asking players not to bring their phones into these sacred places.

Then there’s the issue of safety. GauthierDickey points to stories of users falling, causing accidents because they’ve walked into a street, and trying to find or hatch Pokémon while driving. Of course, he adds, it’s not much different than texting while doing any of these things.

It’s unlikely that any of this backlash will put a damper on the excitement around Pokémon Go worldwide. GauthierDickey, for one, will continue to play the game and even bring the topic into the classroom.

“Pokémon Go is a great case study for game designers, and it will definitely be discussed in our classes that focus on design,” he says. “As far as the technology behind it goes, we already include that type of material in our game development courses. For example, this fall I’m teaching a Networking for Games [class], which teaches students how to build the networking and backend services needed for games like Pokémon Go.”

What we don’t know is if any of the Pokémon creatures will show up in his classroom. Game on!