The setting seemed academic, but the discussion struck a distinctly and intentionally different tone.

Three voices of a popular podcast — Jon Favreau, Dan Pfeiffer and Tommy Vietor, all former staffers in the Obama White House — sat at the front of Sturm Hall’s Lindsay Auditorium to engage in a no-nonsense conversation of the day’s political issues. They were on campus for a discussion co-hosted by the University of Denver’s political science department and DU’s new Center on American Politics.

During its short existence, their Pod Save America podcast has earned a reputation for an unfiltered and informal, comic style that engages youthful audiences.

“It gives a young perspective on politics that I think a lot of times is missing,” said Cristin Espinoza. A senior political science and public policy student, Espinoza considers the podcast her “all-time favorite.”

“It’s engaging and it’s fun, and it gives a lighter [take] on something that seems heavy. It’s really cool to see people engaged who aren’t typically in the realm,” she said.

A liberal project formed in the aftermath of the contentious 2016 presidential election, Pod Save America aims, as its founders say, to “talk about politics in a way that doesn’t make you want to throw your phone out the window.” An average of 1.5 million people download each episode, and its hosts are in the midst of a nationwide live tour, including a stop at downtown Denver’s Buell Theatre.

“What this new Center on American Politics is trying to do is promote more interaction between students and faculty members and people who are actually involved in the political world and the journalism world,” said Seth Masket, the center’s director, who facilitated the conversation. “It is designed to promote discussion across different parts of campus. It allows for that sort of give and take of ideas about real-world issues and ongoing political discussions.” 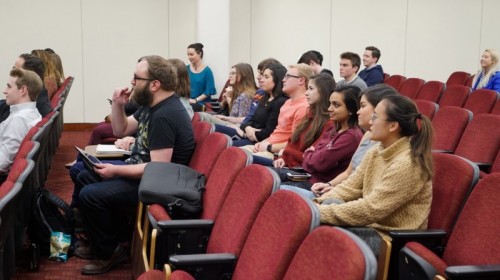 Students in Lindsey Auditorium listen as the hosts of Pod Save America discuss the issues of the day. The audience was encouraged to interact and ask questions. (Photo: Justin Beach)

As the hosts discussed America’s place in the world and strategies Democrats should pursue ahead of the 2018 midterm and 2020 presidential elections, students chimed in with questions, eager to take advantage of the opportunity.

“I think a lot of the time the public policy department and political science department can be sort of … an echo chamber,” said Olivia Hayes, a senior pursuing a degree from each. “And so I think it's good for all of us to have a different perspective from outsiders.”