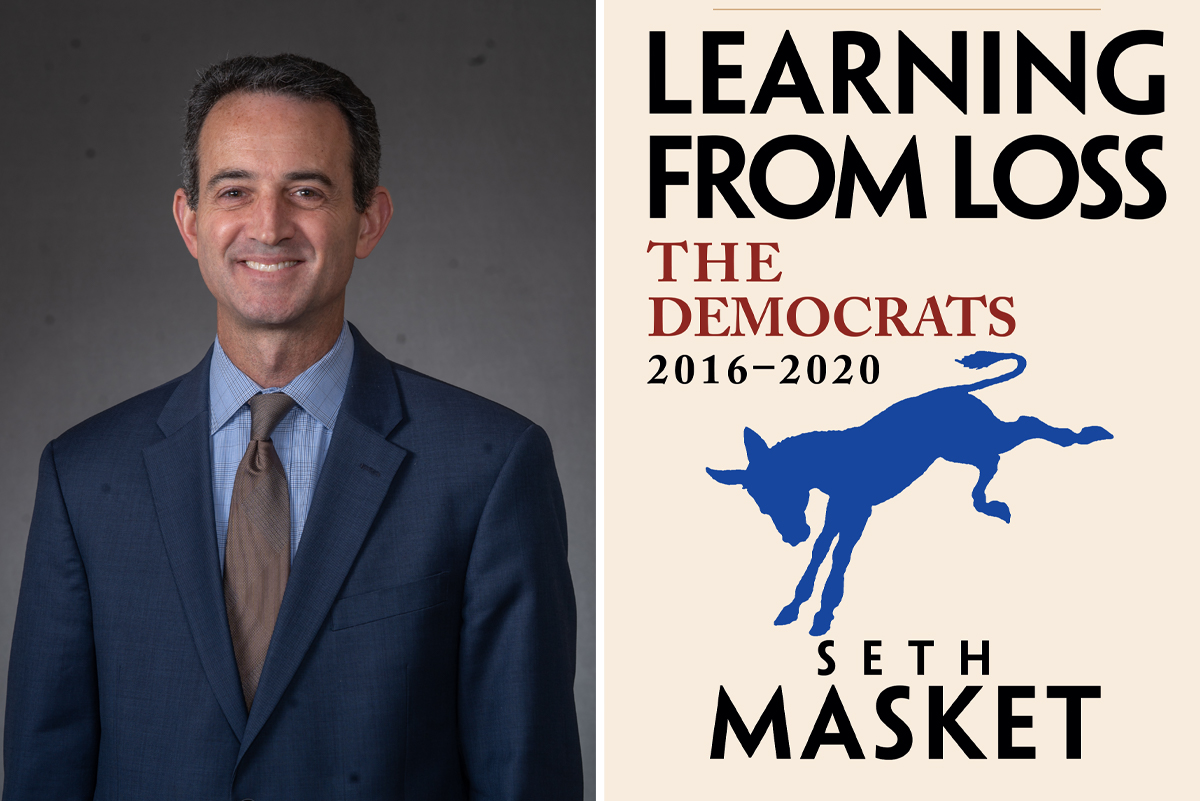 For political science professor Seth Masket, who also serves as director of the University of Denver’s Center on American Politics, election night 2016 evokes memories of professional shock and disorientation.

After all, public opinion polls had long predicted a win by Democratic nominee Hillary Clinton, and Donald Trump seemed an unlikely victor. But in the midst of confusion and sense-making, Masket found his way to research he describes as the most rewarding of his life.

Now, after four years embedded among the Democratic party’s top activists, leaders, office holders and interest groups, dissecting their decisions and conversations, Masket has released his findings in his book, “Learning from Loss” (Cambridge University Press, 2020). The book details the Democratic Party’s decision-making process in the wake of the 2016 election all the way through to 2020’s Democratic primaries and caucuses.

In a conversation with the DU Newsroom, Masket recently shared some key takeaways and behind-the-scenes stories from “Learning from Loss.”

How did you get the idea for “Learning from Loss”?

The funny part is I had this book in mind before election night. I was expecting to write it about the Republicans, because it seemed like they had just nominated someone who was certain to lose, and I was thinking, “Wow, they are in for an interesting couple years of self-reflection. How did they end up throwing away what was possibly a winnable election?”

But it ended up being a question about the Democrats instead. There’s a fair amount of research on the decisions parties make, and that’s always something that has really interested me. But there’s a big black box area there about the conversation a party has before it makes a decision. People in different parts of the party — activists and party leaders and office holders and interest group leaders in all different parts of the country — they have to somehow talk to each other and share information and be able to make a decision in the first place. I was really interested in what that conversation looks like. I wanted to catch a party in the act of processing an election loss and trying to come to terms with it.

What did the research and writing process look like? How did you actually go about “catching a party in the act?”

I made the determination pretty early on that I wanted to focus on party activists. I was thinking particularly of the people in the early caucus states: New Hampshire, Iowa, South Carolina, Nevada and to some extent D.C. This is where all the presidential candidates are going to be spending their time for the next four years, so I wanted to figure out who those people were. In early 2017, I started making phone calls, mostly to political reporters in those early contest states. They started generating a list of names for me to get in touch with.

I also visited these states in 2017 and 2018 and just talked with as many people as I could find. And then I just followed up repeatedly with them. I would send them surveys throughout 2019, asking them if they’d decided on a candidate to support; I [also] asked them what they were thinking about the candidates. I also spent a lot of time at Democratic National Committee meetings throughout 2018, looking at how they were interpreting the election and then changes they made within the party following that.

Tell us more about the interviews. What were some of the major takeaways?

The first question I had asked them when I started doing interviews was, “Why do you think Hillary Clinton lost?” And that was, in a lot of these cases, an hourlong conversation. Just that one question. People had a lot of theories about it, and people were really disoriented by it. There is definitely no consensus opinion on why that happened. But that was one of the things I most wanted to see. How people came to their views on that, how those views changed over a few years and how those views formed who they wanted as their nominee.

There was a particular [response] that I focus on a lot in the book, and that’s the so-called identity politics narrative. This wasn’t the most common, but it did come up a lot. About a third of the people I spoke to brought it up. This is the idea that Hillary Clinton spent a lot of time championing underrepresented groups — women, people of color, the LGBT community, young voters and others — without ever reaching out to working-class whites. As a result, they felt excluded from the Democratic message, and they responded by switching over to the Republican side. There’s not a lot of direct evidence that this is true, but it was a fairly persuasive narrative.

How has that narrative shaped the 2020 election and changes within the Democratic party?

The biggest thing was the decision to nominate Biden. Symbolically, that’s a huge deal, particularly when the party had its largest and most diverse candidate field ever. You had a number of very well-credentialed and very serious women running, candidates of color running. It was a strong field, and the party had a lot of different choices and ultimately went with someone who historically looks like a pretty conventional choice. I think that was a big nod to the idea that they were hugely prioritizing electability.

A lot of people in the party who care deeply about representation and advances for particular groups within the party were willing to compromise quite a bit. They were willing to give up a fair number of things they care about for a win because of their experiences with 2016 and because they saw in Donald Trump a very serious existential threat, and bought the idea that Biden is more electable than other candidates they might care about.

What do you hope people reading “Learning from Loss” walk away with?

We tend to think about party nominations as a contest. All these candidates have to jump through all these hoops. They have to flip pancakes in one place, they have to cook steak in Iowa, they have to do all these campaign events and do debates and give public speeches and raise money with the assumption that whoever does this the best becomes the winner. And Biden got the Democratic nomination without really ever being the best at any of those things. He wasn’t the best debater or the best public speaker or the most successful fundraiser. He didn’t have the most enthusiastic base or anything else. He was picked. This wasn’t a contest so much as the party making a decision.

What I want people to come out of this with is first of all understanding that the party’s decision in these matters is really important. That determines a lot more of what happens than who is simply the best campaigner.