Q&A: What Does the Versailles Treaty Teach Us About the Aftermath of War? 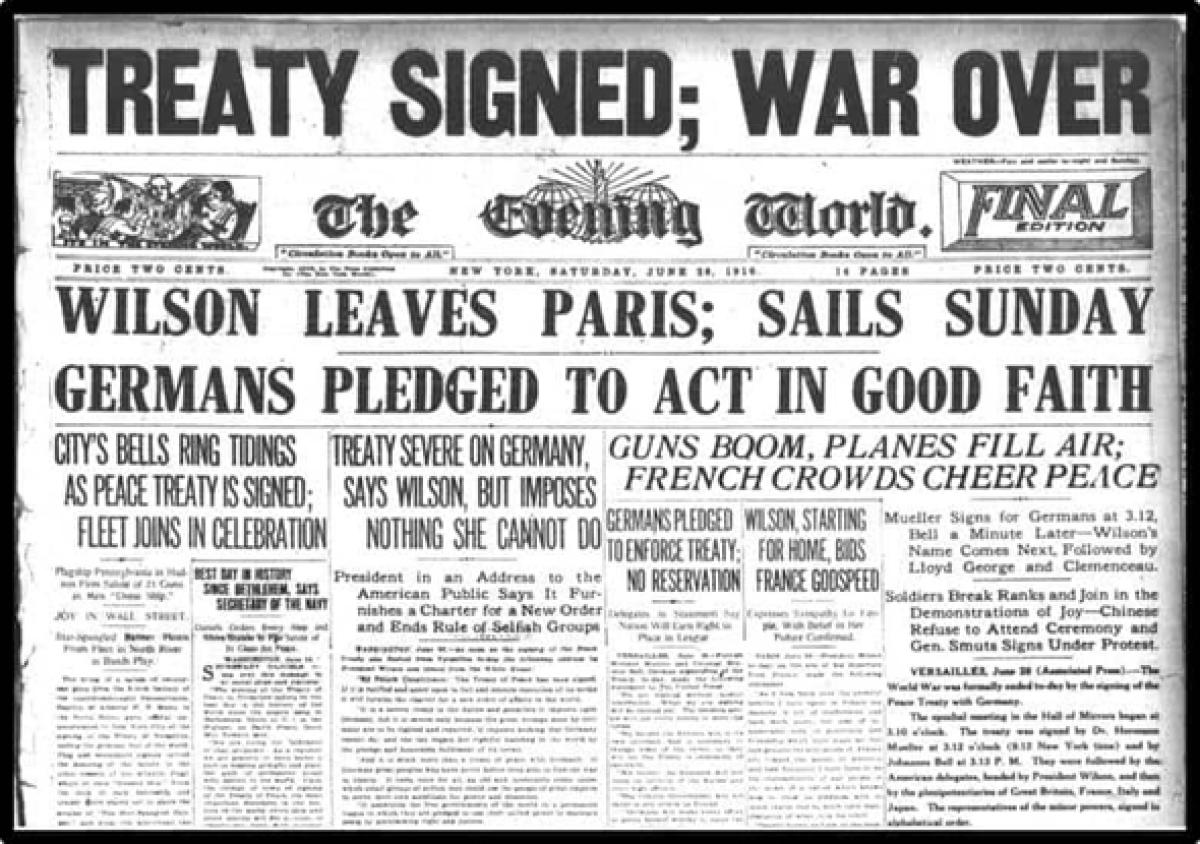 On Jan. 10, 1920, the controversial Treaty of Versailles — which established the terms for peace at the end of World War I — went into effect. In Carol Helstosky’s class on the War to End All Wars, typically offered during spring quarter, the treaty provides students a lot to ponder and debate. Via an email exchange, Helstosky, who serves as chair of the University of Denver’s Department of History, offered the DU Newsroom a crash course in the treaty’s provisions and far-reaching ramifications.

The Treaty of Versailles is famous for both solving and creating problems. What were the treaty’s major accomplishments?

The treaty, signed on June 28, 1919, was the product of conflict between the Allied victors. The United States hoped to achieve, in Woodrow Wilson’s words, “peace without victory,” and Britain hoped to put Germany back on its economic feet. Meanwhile, France and other Allied nations wanted just compensation for the physical, moral and economic devastation of the war. Given the contradictory aims of reparations and future stability, statesmen found themselves in a terrible bind. The Allied nations ultimately rejected the idea of peace without victory in favor of making Germany pay for causing the war (in their minds) and for perpetuating and escalating the conflict for four long years. The treaty forced Germany to surrender colonies in Africa, Asia and the Pacific; cede territory to other nations like France and Poland; reduce the size of its military; pay war reparations to the Allied countries; and accept guilt for the war.

What were the treaty’s most controversial provisions?

We tend to think the reparations payments were controversial, but these provisions must be viewed in proper historical context. Reparations and harsh peace settlements were not unusual. For example, when Russia surrendered to Germany in 1917, Germany issued extraordinarily harsh peace terms under the Treaty of Brest-Litovsk (these terms were invalidated by the Paris peace settlements). While there were a few vocal critics of the Versailles Treaty’s economic provisions, many citizens of the nations that fought for four years felt the settlement did not go far enough. Indeed, one could ask what was the economic value of 10 million soldiers’ lives lost on all sides of the conflict?

Equally controversial, perhaps, were the territorial adjustments dictated by the Versailles Treaty as well as other postwar treaties. These adjustments led to resettlement of populations, and in central and eastern Europe, new nations were carved out of old empires. New nations were created, but they were unstable and vulnerable, given that they had little support or funding from more established nations.

What was the treaty’s impact on everyday German citizens?

No one in Germany was happy with the settlement, and the Allies threatened Germans with military invasion to get them to sign the treaty. After four years of war and sacrifice, German citizens felt humiliated to accept blame for the war and territorial loss. Equally important, the economic provisions of the treaty slowed the nation’s postwar recovery. Slow economic growth and popular dissatisfaction were difficult to manage, especially for the new Weimar Republic, and political leaders struggled to manage the growing volume of complaints. When the government defaulted on payments in 1923, France and Belgium lost patience and occupied the Ruhr mining region. In response, the German government printed more currency to pay the French, sending German citizens into hyperinflation, which wiped out the savings of the middle class. By the mid-1920s, the German economy recovered, and the United States helped Germany renegotiate reparations payments with the Dawes Plan. Germany managed to rebuild and recover after the war, but not at a pace that satisfied everyone.

Many historians have assigned the treaty some responsibility for the rise of the Nazi Party in Germany. How so?

It is certainly true that far right parties in Germany used the Versailles Treaty to resist and reject German democracy and the Weimar Republic, probably because the treaty was so unpopular among German citizens. It is also true that Adolf Hitler frequently railed against the Versailles Treaty in his speeches and promised to reverse the treaty’s provisions if elected leader of Germany. The Versailles Treaty was one of many factors that led to the rise of radical political parties, but it is important to remember that across Europe, citizens were looking for radical solutions to their problems. When I talk about the aftermath of World War I in my classes, for example, I emphasize that the peace settlement created political upheaval in victorious nations as well as in Germany. Italy was on the Allied side and fought for the promise of land after signing the Treaty of London in 1915. After the war, however, Italian politicians returned from Paris empty-handed because secret treaties were invalidated by statesmen during the peace negotiations. Furious Italian nationalists launched protests and occupied the city of Fiume (now Rijeka), thumbing their noses at the peace settlement and defying the government’s authority. The Nazis, Italian Fascists and other radical politicians attempted to rally people against democratic governments by using the Treaty of Versailles as a vehicle of discontent.

A hundred years later, what does the treaty have to teach us about the aftermath of war?

The First World War had complex origins, and the war was fought over the course of four years, wiping out an entire generation of young men and creating massive social, political and cultural upheavals. In my class on World War I, we spend 10 weeks closely studying the war, and we still have many questions and concerns at the end of the quarter. When we discuss the Versailles Treaty, my students conclude that it was an impossible task for any one treaty, conference or settlement to put European nations back on track after such a grueling and complicated war. They also conclude that it seems unfair to blame the Treaty of Versailles for the Second World War. How could individual actors be able to see or understand what was going to happen? I agree with my students on both counts.

For those who want to learn more about the treaty, what suggestions do you have for additional reading?

• Robert Gerwarth’s “The Vanquished. Why the First World War Failed to End” (2016)