Lamont violinist performs at festivals, plays in film scores and plans for a bright future

Ask 27-year-old Chinese violinist Quanshuai Li whose career he would most like to emulate, and he answers not with the name of a rock musician or a classical phenom, but with that of Ivry Gitlis, a 95-year-old Israeli virtuoso violinist who has performed with orchestras all over the world. 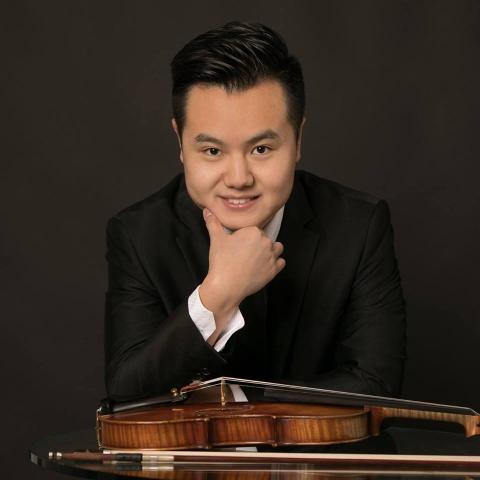 “He is 95 years old, and he is still playing. I can see that violin is part of his life. He loves music,” says Li, who will receive a master’s degree in June from DU’s Lamont School of Music. “We all talk about technique, how to play different styles, but for him, music is music. Use your emotion, use your passion, use your love to play. That’s all. Just play it.”

Li is well on his way to an enduring career like Gitlis’ — he began playing violin at age 5 and at age 19 was admitted to the Central Conservatory of Music in Beijing, studying with renowned violin professor Vera Tsu. Li came to the U.S. in 2013 to pursue an artist diploma from the University of Cincinnati College-Conservatory of Music. From there he headed west to study with Lamont faculty member Linda Wang, herself a respected violinist who has taught and performed across the globe.

“She is such an amazing teacher,” Li says. “She’s really leading me to the next step of what I should do as far as musicianship and giving me more opportunities to perform.”

And perform he does, sometimes traveling to multiple festivals a month—in Florida, New York, China and elsewhere—to hone his skills and network with other young instrumentalists. After receiving his master’s from DU, he will return to China to further his music studies at the Shanghai Orchestra Academy.

“The U.S. is a really nice country; people here are really nice, especially in Lamont, but I cannot be stuck in one place for music,” he says. “I have to travel a lot and study with different teachers and play for different people.”

Long term, Li plans to make a career out of performing, appearing on as many stages and in as many recording studios (in Cincinnati he worked on a number of film scores) as he can. Wang says she sees nothing but success for Li as he crafts a life in music.

“Quanshuai is a joy and privilege to work with. He is a gifted learner and an extraordinary violinist,” Linda Wang, professor at the Lamont School of Music says. “It has been remarkable to witness his continued artistic growth. His emotional passion and quest for musical excellence have inspired and elevated my entire violin studio, as well as all the ensembles in which he collaborates.”