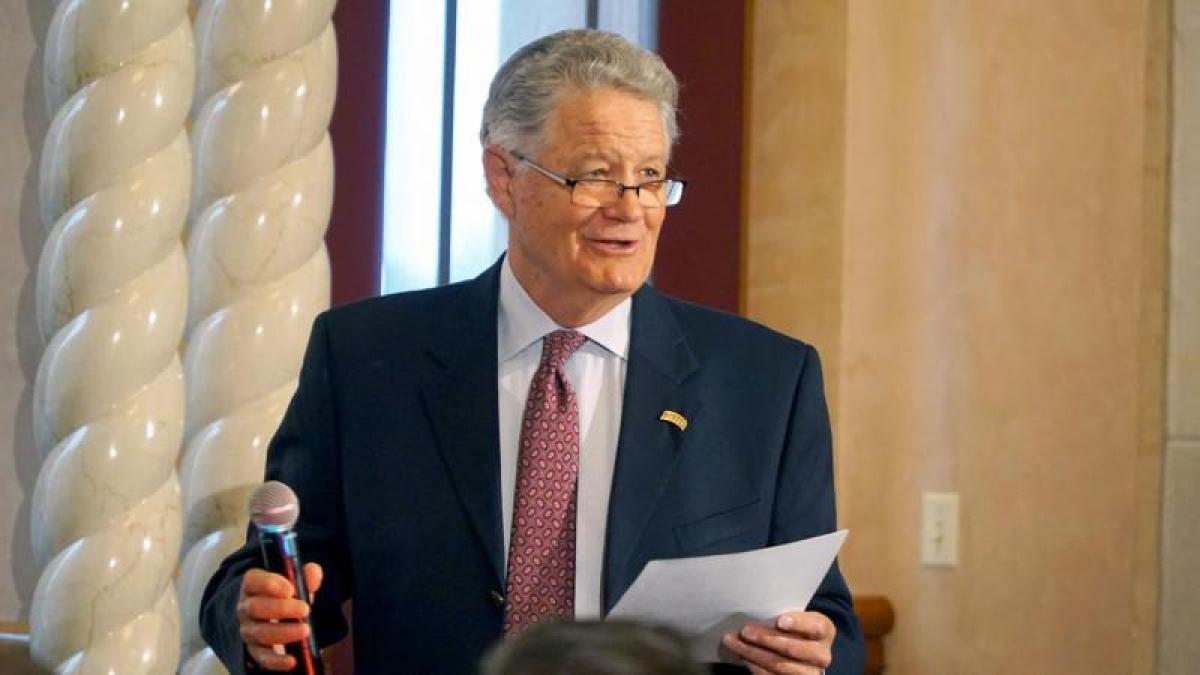 In a storybook ending to several chapters of his life that saw him first step on the University of Denver campus as a student-athlete 50 years ago this month, Pioneers’ Athletic Director Ron Grahame has announced his retirement for Sept. 1, 2019.

“Ron Grahame had a tremendous impact on the University of Denver long before I arrived on campus, but I will always be thankful for his leadership and guidance during my first 18 months as a Pioneer,” Vice Chancellor for Athletics, Recreation and Ritchie Center Operations Karlton Creech said. “His ability to lead the athletic programs to the success this university has managed over the last few decades, while standing by the integrity Ron practices and preaches everyday makes his career truly amazing and one that sport administrators here and around the country should strive to replicate. We wish Ron, Charlotte and their family the best in this next chapter of their lives. They will always be Pioneers.”

Grahame and his wife Charlotte have been long-time Denver residents, have two sons and are proud grandparents of five. John Grahame was a former NHL goaltender, winning the Stanley Cup in 2004 with the Tampa Bay Lightning, while Jason Grahame played his collegiate hockey at the University of Denver (2003), making him and Ron the first father/son combo in hockey to don the Crimson and Gold. When John signed with the Bruins, they became just the second father/son goalie tandem to play for the same NHL team.

It has been my honor to represent the University for more than 40 years as a student-athlete, coach and administrator. During that time there have been many changes that have afforded me the opportunity to grow as a person for which I’m extremely thankful. Watching this great institution and athletic department grow from what it was in 1969 to what it is today has been truly remarkable.

There are so many people I would like to thank – too many to mention in this short space. I would like to specifically acknowledge Murray Armstrong, my coach and the man who first brought me to Denver as a student-athlete which began my long association with the University. Jack McDonald, who wanted a former Pioneer on his staff in Athletics and took a chance on an old goalie. Peg Bradley-Doppes for all of her unwavering support despite knowing nothing of me or the staff she inherited. Chancellor’s Dwight Smith, Dan Ritchie, Robert Coombe and Rebecca Chopp who we all owe our thanks for their leadership and guidance. Board of Trustee members Joy Burns, John Miller, KC Gallagher, Cappy Shopneck and Jane Hamilton for their unwavering support for Athletics. I also can’t thank my family enough - my wife, Charlotte, and my two sons, John and Jason, for always being there throughout the adventure and growing our family with the wonderful additions of daughter-in-laws Sandra and Niki as well as five grandkids, Jack, Violet, Colton, Knox and Luke.

It has truly been a privilege to serve the University of Denver and work with so many wonderful staff, coaches and students. I feel fortunate to have been a Pioneer for most of my life and Denver will always be home for the Grahames.

Ron Grahame's Impact on the Lives and Career of Others:

Ron helped hire me back in 2005 as a 22 year old. He has been nothing but supportive of me and our program my entire time here at DU.

I have wonderful memories of him traveling with us to conference, regionals and nationals and to Baltimore in 2009 when our team finished the highest we’ve ever finished in program history, 5th place! He was the happiest and proudest I have ever seen him of our student athletes. We couldn’t have done it without his loud cheering and clapping and wonderful support.

We will miss Ron so much and personally, I will miss his support and approval. Ron was my “go to” at DU with thoughts, questions and new ideas I had for our program and athletic department. He was always so professional and had the right words to say in time of need. Whatever he was talking about always made sense to me and was so simply explained.

I’ll never forget when I was hired back in 2005, my first week as an employee here, walking to my office through Magness Arena hearing “good morning Lindsay” from 20 yards away. He knew my name and who I was and greeted me with energy, enthusiasm and a passion for this athletic department every day I saw him from this very first day. This is something I will always hope to share with others when they walk into Magness Arena. These memories are how I’ll always remember Ron.

The first thing that comes to mind about Ron Grahame is his integrity, consistency, and his love for people. I feel indebted to Ron because he was always there for me when I needed him. He was there during the best moments of my young career, and he’s been there during the down moments. He’s always been a mentor and supported me, teaching lessons from his wealth of experience as a coach, a parent, a grandparent and administrator. I think the one thing that I respect the most about Ron is that his strong moral compass never seems to be misguided. As a young coach, that gave me a lot of confidence. Ron put his neck out on the line to hire a 28-year-old soccer coach and I can never thank him enough for providing that opportunity and believing in me. He will forever be a Pioneer.

When I was hired at DU, the first person Peg Bradley-Doppes told me about was Ron Grahame. He was a great hockey goalie at DU and in the NHL, he loved DU and was the guy I should go to for any help I might need. The more I learned about Ron that first year, the more I understood why everyone looked up to and respected him so. The stunning thing about this DU icon is his humility. The first time Ron traveled with our team to an NCAA Tournament game, he came along to our pregame practice. I figured he would just sit and watch, but quickly and much to my surprise Ron had picked up a stick and was chasing errant shots and returning them to our players. (He looked great doing so)! I soon found out that Ron had played box lacrosse in Canada and actually played a bit on our DU team during his college years.

Ron has been a great mentor and friend and will be missed by all of us very much.

Ron was instrumental in DU Gymnastics’ continued success every year and in our historic 2019 season. He’s had an impact on everyone: our programs, our student-athletes and on me as an individual. I appreciate his character, work ethic, commitment and passion for Denver Athletics. He trusts everyone to do the jobs they were hired to do. He’s been an inspiration and mentor to me personally and professionally. Ron – along with a team of special people – took a chance hiring a young assistant coach in 1998 and gave me the opportunity of a lifetime here at the University of Denver. I’m so thankful that my journey included him. I will miss him terribly. His legacy will last forever.

Ron Grahame was a great role model for me as a coach at DU. As my boss he taught me how to be humble, a great team player on campus, how to lead student-athletes and to trust my instincts. He impacted my life in such a positive fashion that I never wanted to disappoint him with how our team, staff and I represented DU at all times. He made us want to be great by doing things the right way.

The word I think of when I hear the name Ron Grahame is integrity.  Ron and Peg gave a young soccer coach an opportunity to lead the Pioneer Soccer Program in 2008. I am sure there were plenty of days that Ron regretted that decision. Ron guided me, mentored me and supported me to be the man and the head coach I am today. I certainly learned from my mistakes but more importantly from support from Ron. I never felt judged but felt supported. Ron knew every player’s name and created relationships with all the players that had come through our program. I loved having Ron on the road and spending time with him in conversation. I miss being around him daily and I will certainly miss him on my visits back to Denver. I just want to thank Ron for the opportunity he gave that resulted in the man, the coach, the husband and the father I try to be each and every day. I wish Ron and Charlotte nothing but the very best in the next chapter on their lives. Know Mel and I are indebted to you always.

“Ron was one of the all-time great players at DU, perhaps only behind the legendary Keith Magnuson. As a DU athletics administrator, Ron was defined by his unwavering loyalty to the University of Denver, which no one could ever question. Ron had a tremendous impact on the University as a whole, and I wish Ron and his family all the best.”

Ron Grahame is one of the finest individuals the University of Denver has ever had – few love this campus and our great community more than Ron. He is one of the kindest, most humble people one could ever meet, and he is admired and respected by all on campus. Ron is simply one of the best ambassadors DU has ever had, making significant contributions in three distinct roles – student-athlete, coach and administrator. Ron has touched the lives of many athletes and coaches as a stellar mentor and supervisor. He has overseen many successful coaches and their respective programs – teams that have found great success and have represented DU with class, academic excellence and integrity. Ron’s leadership and integrity have no doubt shaped the values of coaches and teams at DU, and he can take great pride in their successes.

1993-99 — University of Denver - Assistant AD for Operations and Compliance

1997 — Inducted into the University of Denver Hall of Fame

2017-19 — University of Denver – Promoted to Director of Athletics