Unless you’ve played competitive hockey, you might not know that there’s a league for players between the ages of 16 and 21 called junior hockey. It’s where U.S. and Canadian hockey players go after high school in hopes of growing, improving and getting a college scholarship.

Stormer Santana, now a third-year student at the Daniels College of Business, began playing junior hockey thinking he’d gain valuable experience before college. Instead, he had a very challenging experience. He was traded to five teams in three years and lived with six families. With an eye on returns, he converted his tough experience into a successful app called Scoutr Sports. 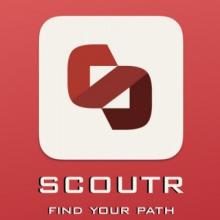 Scoutr is a website where athletes and parents can anonymously rate, review and share their athletic experiences on junior and college hockey teams.

Santana got the idea from using Rate My Professor. He realized that athletes could apply the same methodology for researching professors and their courses to researching past and current players’ experiences with teams before accepting a position with a particular team.

“I wish I would have known more about the places I went before I had to move,” he says.

Santana came up with the idea in his first year at DU and began developing it his sophomore year. In his freshman Gateway to Business class, he learned how to prototype apps. He ended up developing and competing in the Madden Challenge with a different app idea, winning the challenge in fall 2014. The competition allows Gateway students to compete for seed money to launch their business ideas.

“The class really taught me the basics of how to build a business,” he says.

Santana returned to his idea of Scoutr after the course. Since then, he’s worked hard on research and development, officially launching Scoutr in February 2017.

“Stormer is part of a growing number of undergraduates who have launched successful ventures after coming out of the Madden Challenge,” says Stephen Haag, faculty director of entrepreneurship at Daniels. “John W. Madden Jr., a successful commercial real estate developer in the Denver area, created the Madden Challenge specifically to enable students like Stormer to chase and realize their dreams.”

Both parents and players can leave reviews. Santana personally approves them before they go online. He wants to make sure the source is credible. He currently has 400 teams and more than 200 reviews on the platform. In February, Santana had over 12,000 visitors to the website. He’s already had users express interest in comparable platforms for lacrosse and other college sports.

“We have done our research and know that a tool like Scoutr is needed across all sports,” Santana says. “When you have devoted your life to training for a sport, decisions like where to compete or where to go to school shouldn’t be made based on information from one single, potentially biased source. These are important, possibly life-changing decisions. The only way to get a full perspective is to learn from those who have been there before you.”

While Santana is hopeful that Scoutr will scale, he’s not sitting back and relaxing. The finance major is interning for the third time this summer in Boston with Fiera Capital, an asset-management company. He certainly has options ahead.

“The enthusiasm, energy, commitment and ambition of our Madden Challenge students, like Stormer, is simply amazing,” Haag says. “Every time the faculty ‘raise the bar,’ our students respond by achieving at higher levels. Their passion is the key. It certainly is in Stormer’s case. “