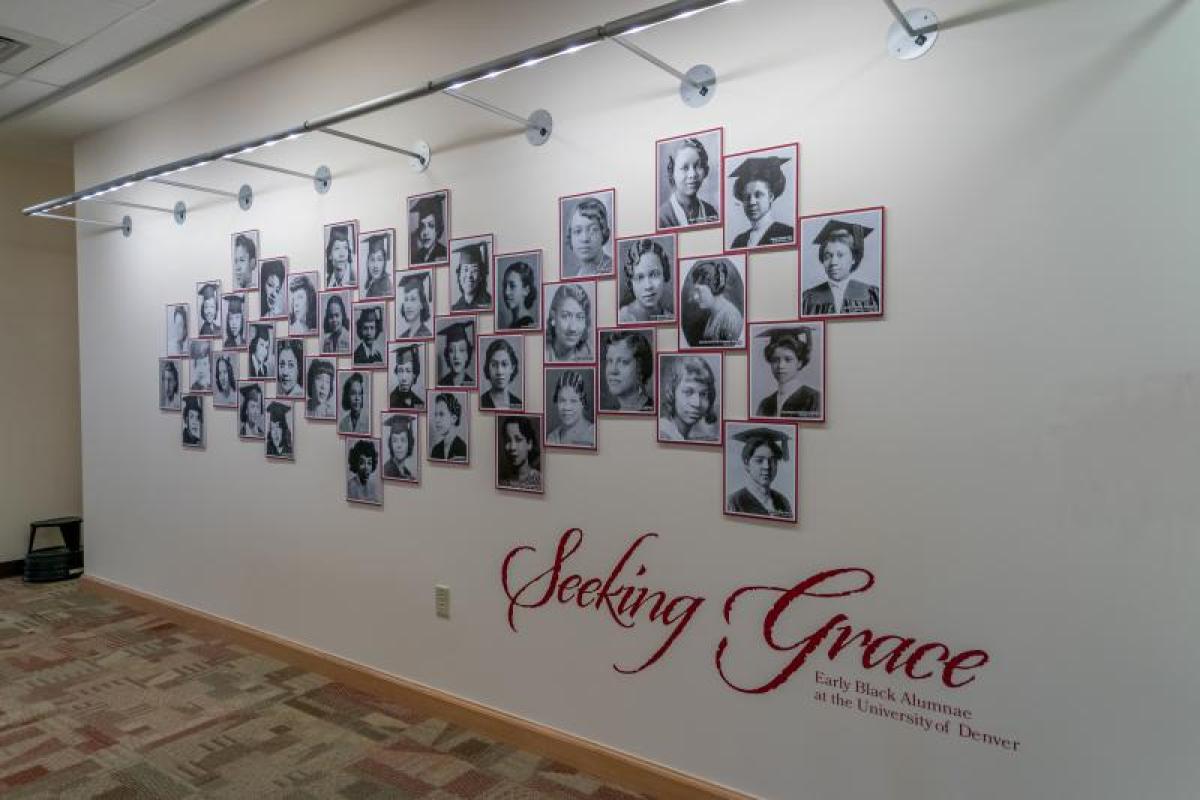 In 1908, the University of Denver saw its second black female student graduate. Her name was Grace Mabel Andrews.

Andrews was born in Missouri in 1886. She had two younger siblings, Jesse and Clyde, and her father died before her 15th birthday. Sometime before 1905, her family made the long journey to Denver, where Andrews enrolled at DU to pursue a bachelor’s degree. She majored in Latin, minored in French and economics, and found community in church at Shorter AME, where she was a practicing Methodist. Andrews used her degree to become a teacher, educating students in Tulsa and Kansas City. After witnessing the devastation of Tulsa’s deadly race riot in 1921 she returned to Denver to share her experience with members of her church. According to the Colorado Statesman, all of Denver knew and loved Andrews, and her words that day in front of her congregation had many holding back tears.

Though black women have long had a meaningful presence at DU, until now, much of the University’s history has failed to acknowledge their legacy. “Seeking Grace: Early Black Alumnae,” an exhibit curated by DU archivist Kate Crowe in partnership with the University’s Sistah Network and former DU professor Nicole Joseph, aims to remedy that.

In summer 2017, Crowe used her 10-week sabbatical to reconstruct the stories of every black woman who attended DU between 1900 and 1945. With the help of yearbooks, census records and one of Denver’s oldest black newspapers, the Colorado Statesman, Crowe gathered photos of 43 women and the stories of more still, in what she calls an “attempt at an exhaustive list.”

Like Grace’s, nearly every woman’s story started somewhere in the South and weaved its way across the Midwest before reaching Denver. Every woman, Crowe found, had been a Methodist who attended either Shorter AME or Scott Chapel. Almost every woman had gone on to become a teacher, and most had to leave Colorado just to find schools willing to hire black teachers.

While many questions remain about what it was actually like for these women at DU, the project made clear one undeniable fact, says Anthea Johnson Rooen, co-founder of the Sistah Network, a campus affinity group dedicated to providing academic and professional opportunities to DU’s black, female graduate students. “What this exhibit does is it reminds us as women who identify as black that we actually have a longstanding history at the University of Denver,” Rooen says. “It reminds us to be persistent. It reminds us that changes can be made. It reminds us not to quit. It reminds us to stay focused. It reminds us that black women can make a difference.”

As the legacy of strength left behind by DU’s early black alumnae has been brought to light, it already has had a tangible impact. Patrice Greene, who follows squarely in the footsteps of the women in “Seeking Grace” through her graduate studies in DU’s Morgridge College of Education, has not only been able to leverage these stories to further her own education, but also has gained a sense of connection. Greene and fellow graduate students Elizabeth Ndika and Kahlea Hunt-Khabir were connected to the project through the Sistah Network and now serve as research assistants on the project, continuing to write the stories of black women into DU’s history.

“A lot of the time, the stories of marginalized communities—particularly black women—get pushed under the rug,” Greene says. “They need to be brought to the forefront because they are important stories that a lot of people didn’t even know existed. It gives power and validation to our experiences in higher ed.”

Through “Seeking Grace,” these stories are being told not only to the DU community, but to all of Denver. The exhibit had its initial run in spring 2018 in the Anderson Academic Commons, before being moved to Ruffatto Hall. In March 2019, the project will be displayed in Denver’s Blair-Caldwell African American Research Library in celebration of both Black History Month and Women’s History Month.

For Terry Nelson, Blair-Caldwell’s senior special collections and community resources manager, the story of black women at DU is one that holds significance far beyond the University’s campus. “How many people in Denver knew about all of these ladies? Very few,” says Nelson. “I think we should … encourage our young adults and youngsters to know this history, because some of them are going to see themselves. They are living the challenges these women lived, and they’ll know—clearly—that they can do it.”

Celebrate DU's 2019 Diversity Summit and Black History Month by visiting the "Seeking Grace" exhibit on the second floor of the Morgridge College of Education's Ruffatto Hall.