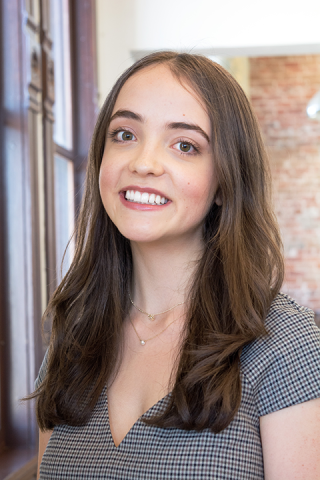 As University of Denver senior Sophia Mellsop thinks about graduating from DU in Spring 2022, she isn’t where she expected to be.

Mellsop spent her final two years of high school living with a host family in Denver, dancing seven to eight hours a day and taking online high school courses at night. She was on track to achieve her childhood dream of becoming a professional dancer.

While she loved ballet, after dancing full time for a year after high school, Mellsop realized she wanted to explore other sides of herself that didn’t involve dance.

“College vs. dance was the hardest decision,” Mellsop says.

Her decision to trade her pointe shoes for college landed Mellsop at Smith College in Massachusetts for her freshman year.

Although she had always considered herself “not a math person,” an economics class sparked Mellsop’s interest in pursuing a number-driven field. “I found the story behind the numbers fascinating,” she says.

Mellsop decided to transfer to DU a couple of weeks before the start of her sophomore year, largely because of the Daniels College of Business’s reputation. “I was really interested in experiential learning, and I knew Daniels would provide that,” Mellsop says.

Since transferring to DU, Mellsop hasn’t looked back. “I have no regrets,” she says.

A finance major and the current president of DU’s Women in Business (WiB) organization, Mellsop says DU and especially WiB have challenged her to step up as a leader. “My experience at DU has allowed me to grow into a fuller, deeper, braver version of myself,” Mellsop says.

Mellsop says her peers at DU — notably past-WiB leaders Amanda Martinez and Milena Rogers, current WiB vice president Emma Walker, and Finance Club president Ruchita Raghunandan — have inspired and encouraged her when she doubted her ability to lead. Mellsop says it’s her peers she’ll miss most when she graduates.

When she graduates, Mellsop will be working in wealth management for PNC. She says she loves that wealth is a very personal, relationship-based business.

No matter where her professional life leads, Mellsop wants mentorship and empowering women — two things she has experienced abundantly in WiB — to be major components.

A merit scholarship recipient, Mellsop feels the impact of philanthropic giving personally and realizes its impact beyond the individual scholarship recipient. “Not only did scholarships make DU financially feasible for me, they enabled my little sister to go to her dream school. They also served as a source of encouragement to me. By giving, the giver is saying they believe in you,” she says.

To learn about how your gift in support of scholarships can make a difference in the lives of students like Sophia, contact ScholarshipGiving@DU.edu.