Sié Center Engages in Study on Global Peace and Security

Funding for study provided by two grants from the Carnegie Corporation 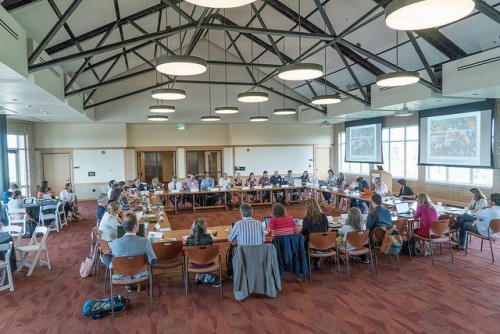 Two grants from the Carnegie Corporation of New York are backing a distinct study into global peace and security by the Sié Chéou-Kang Center for International Security and Diplomacy at the University of Denver’s Josef Korbel School of International Studies.

Funding for the grants, each totaling $1 million, is part of Carnegie’s “Bridging the Academic-Policy Gap” program, which is supporting two projects under the Sié Center study.

“The two grants from the Carnegie Corporation of New York have helped us solidify a distinct study of global peace and security at the Sié Center,” said Deborah Avant, chair and director of the Sié Center. “Our study focuses on the wide array of actors — state and non-state — that matter for global peace and security, and seeks to understand the many different dimensions that add up to peaceful communities.”

Additionally, Avant said, the first project supported significant engagement by the research team with a variety of policy players, including government officials, corporate offices and resistance groups. As a result of the project, the Sié Center established a post-doctorate program focused on research regarding policy and understanding global security.

An upcoming book related to the research will focus on civil action by governments, civilians and armed groups, and how it can affect the course of a conflict, the degree of violence in different locales of a conflict, and the capacity to maintain relationships and trust in the midst of a conflict.

The second project is focused on inclusion, which is a key constitutive element of civil action, and its impacts on violence, peacebuilding, and governance.

According to Associate Dean of Research Erica Chenoweth and Assistant Professor Marie Berry, this project consists of three research teams — one looking at gender inclusion and its impact on protests and peacebuilding; another collecting data with which to measure inclusion; and a third focused on inclusion as it impacts the capacities of communities to bargain with extractive industries operating in their midst.

“This research program has the potential to reveal whether, when and how inclusive processes in governance, business, peacebuilding and civil society lead to more peaceful, just and prosperous societies,” Berry said.

Another goal of the project is to allow for a continuation of the center’s policy engagement, post-doc programs, public outreach and other initiatives. Part of that public outreach included a recent International Women’s Day panel that highlighted the work of Denver women fostering inclusion during difficult moments.

“We hope it will also help launch a new ‘Inclusive Global Leadership Initiative’ (IGLI) that will bring underrepresented groups to DU to foster their leadership potential,” Chenoweth said. “Given our current politics, we also have taken the opportunity to use our public forums to examine inclusion closer to home.”

IGLI’s first Summer Institute, scheduled for Aug. 27-30, and will host 12 women activists from around the world who are currently involved in civil resistance campaigns to promote peace, human rights, and freedom. It will be the first in what is expected to be an annual tradition of bringing frontline activists from marginalized communities to the University of Denver to engage in a training and dialogue workshop on civil resistance.

“The women selected for the 2017 Summer Institute will be invited to participate based on their outstanding contributions to ongoing campaigns around issues such as peace in Libya, displacement in Colombia, government corruption and violence in Burundi, indigenous rights in India, and women’s rights in the U.S.,” Berry said.

During the workshop, activists will have the chance to meet one another, share stories about their particular struggles and successes, and receive training on best strategies and tactics from some of the world’s leading experts on nonviolent civil resistance campaigns.

It also presents an opportunity for frontline activists to share with academic researchers the types of data or analysis that would be most useful for their campaigns in order to bridge the gap between academics, activists and policymakers. Two events will be open to the public, including an evening lecture and a film screening.

“These community events reflect our goal of establishing the University of Denver as a leading convener for conversations related to women’s leadership across the world,” Chenoweth said. “In 2018, our plans will expand. Through an open, competitive application process, we envision bringing more than 30 activists to campus to participate in a seven-day workshop, which will allow more time for the essential work of sharing, learning, and networking with other activists around the world.”