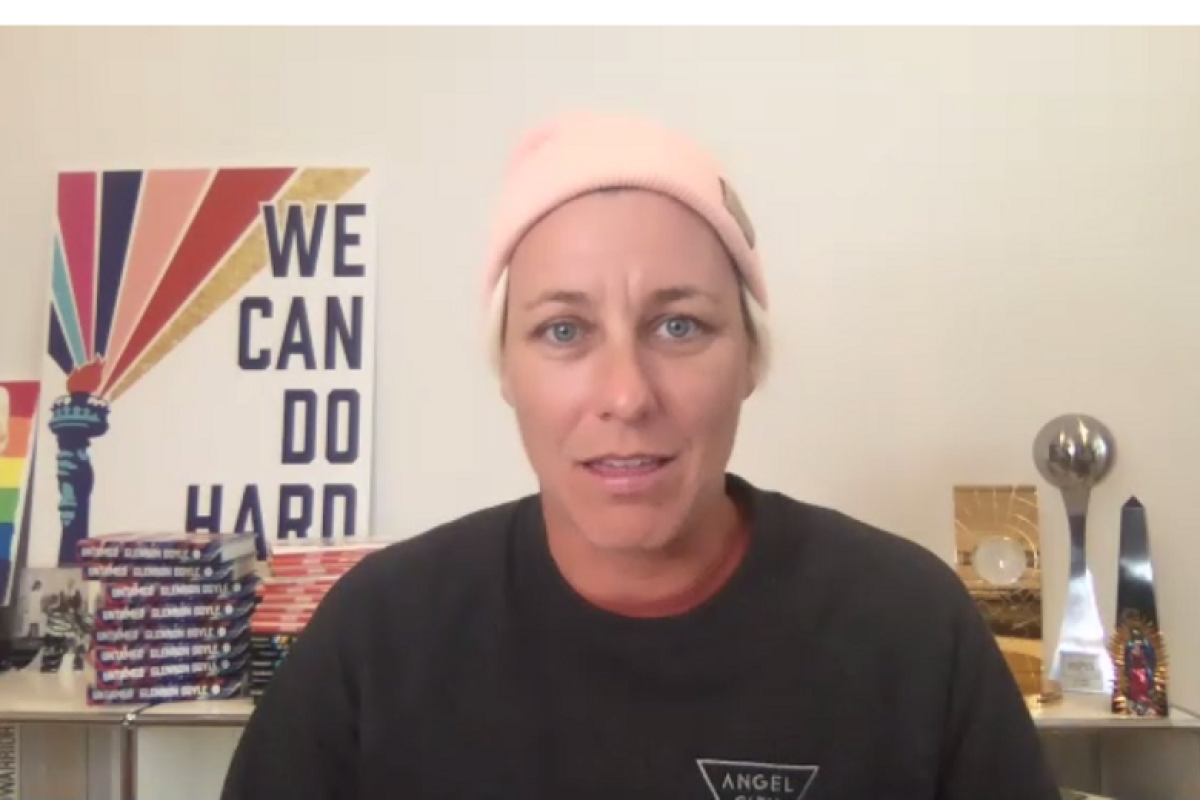 This was supposed to be Abby Wambach’s night.

After leading the U.S. National Team to the women’s world cup trophy, the soccer star stood between Peyton Manning and Kobe Bryant, accepting an award from ESPN, coronating her as an “icon.”

And yet, instead of celebrating on that night in July 2016, Wambach went back to her hotel room.

“For all of my career, I acted so much like I acted on that stage, just feeling grateful, often the only emotion women are allowed,” she said, speaking at a University of Denver webinar. “And then it hit me as we turned to walk off that stage that the three of us were walking into three very different retirements.”

Instead of a cushy, comfortable next chapter, Wambach — a two-time Olympic gold medalist who has scored more international goals than any American soccer player, male or female — was worried about finding a new job so she could pay her mortgage.

In her retirement, Wambach has found plenty of new ventures: Her viral 2018 commencement speech at Barnard College led to the publication of her memoir and her latest book, “Wolfpack.” But she hasn’t strayed from her lifelong commitment to fighting for equality for women. (She previously made headlines advocating for equal pay for men’s and women’s players on the U.S. national team.)

As the headliner at the Graduate School of Professional Psychology’s signature event series, “Redefining Mental Health: A Force for Self and Society,” Wambach discussed her fight for equity in sport and what it takes to overcome adversity during a difficult year marred by the COVID-19 pandemic.

“There’s just something about this time that I will not let it beat me down,” Wambach said, acknowledging those who have lost loved ones. “You get to choose how you view this time. It’s weird for all of us. That gives me some sanity.”

Wambach stressed self-care and valuing the team around you, even if that team is just one other person. The wife and mother of three has been trying to “put on positive glasses,” and count her small victories: not needing to travel or pack a suitcase or even set an alarm.

“As an athlete I’ve developed this attitude where I’m doing all that I can to cross off the things on the list that bring me joy,” she said. “Working out, self-esteem, eating right, feeling good.”

Although the pandemic has curbed some forms of social interaction, Wambach said, technology has allowed her to talk to her family more in the last six months than she had in the previous six years.

Throughout her talk, Wambach shared her personal story, taking care to point out the times when she fell short of her goals — anecdotes that resonated with Shelly Smith-Acuña, dean of the Graduate School of Professional Psychology.

“She was grounded in realistic optimism, asking us to ‘make failure our fuel,’” Smith-Acuña said. “We are facing so many failures right now, and she invited us to find motivation in these failures.”

Initially scheduled for April as an in-person event, Wambach’s presentation was moved online, in hopes that its message would be just as strong and relevant in a digital format.

“Although we wish we could be on campus in person together,” Smith-Acuña said in her opening remarks, “we’re going to make the best use of our time together virtually to engage in this important conversation on the power of prioritizing our mental health, the impact that can make on our lives as individuals and the ripple effect it can have in society.”