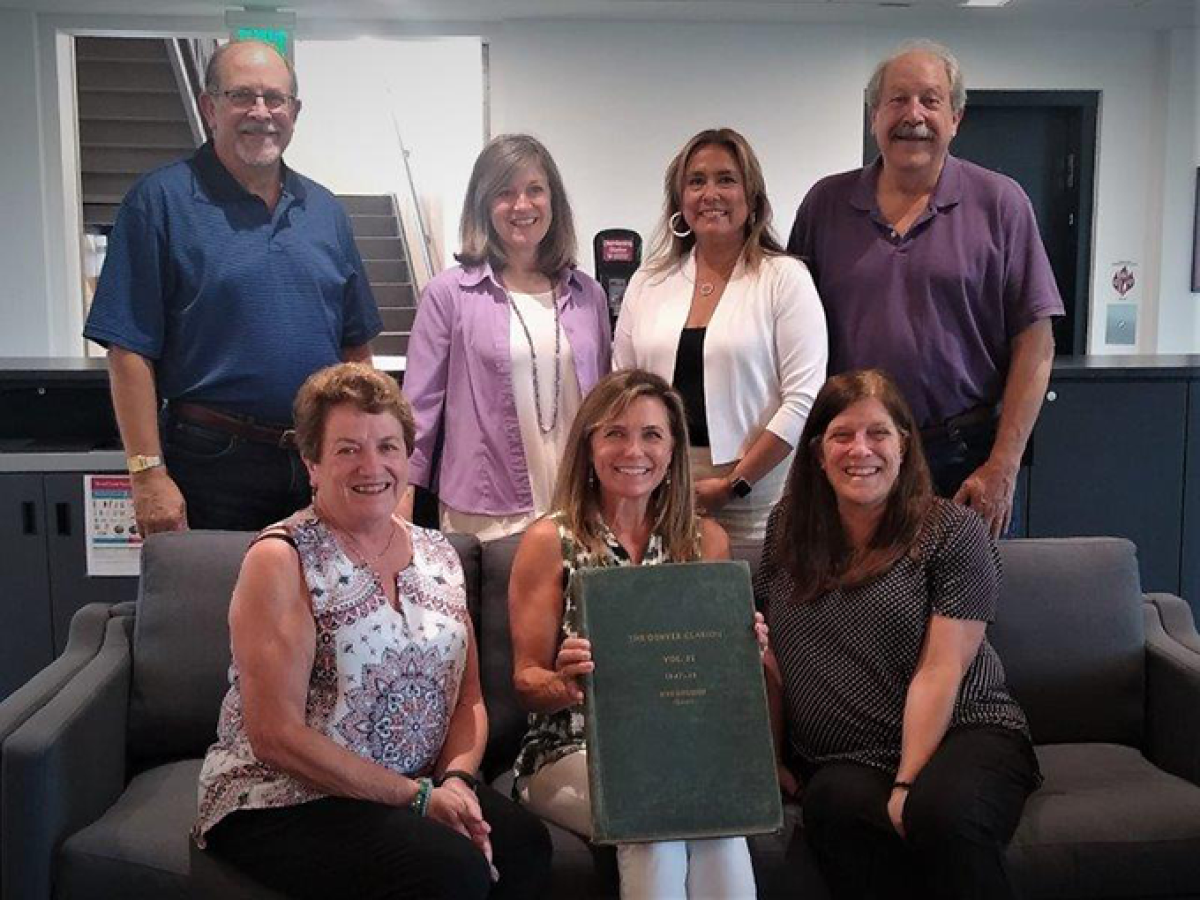 The Steinke family with Prof. Lynn Schofield Clark. In addition to establishing the student scholarship, the family donated a leather-bound volume of 1947 Clarions to the University's archives.

The Steinke family recently established the Doris Davenport Steinke Pathways Endowed Scholarship, which provides scholarship support to undergraduate students in the Media, Film & Journalism Studies program in the College of Arts, Humanities and Social Sciences. In naming the scholarship for Doris Davenport Steinke (BA ’48), the family honors their mother’s passion for journalism and her leadership as one of the first female editors of The Clarion, DU’s student newspaper. This scholarship is the second one that the family established in honor of their parents; the first one honored their father, Gene.

“Both Mom and Dad always emphasized the importance of a college education,” Richard Steinke says. “There is no better thing that we can do as their heirs than to provide that opportunity for other students.”

“The Steinkes’ contribution to scholarships will help students to feel rewarded for their time in journalism,” says Tori Everson, editor of The Clarion. “People outside of journalism don’t know how much time goes into the work. As students, we work on The Clarion outside of school — that investment of time is how you get a job in journalism.”

Gene and Doris met at DU when they worked together on The Clarion. Gene played basketball for the University, a talent and passion that Dave later carried on when he played on DU’s basketball team. Doris and Gene maintained lifelong connections with the friends they made at DU.

Doris and Gene’s legacy lives on through the generous lives of their six children — Dave, Richard, Sharon, Susan, Linda and Diane — and through the scholarships established in honor of each of the parents. Following Gene’s passing, Doris and the siblings established the Gene E. Steinke Scholar Athlete Endowed Scholarship Fund, which supports men’s basketball student-athletes. Doris was thrilled that they were able to honor Gene in that way, knowing how much he loved the University and its athletic programs. After Doris’ passing earlier this year, the siblings decided that it was only right to honor her in a similar way, so they established the scholarship in her name.

“We hope that DU students will benefit from this scholarship funding, allowing some to attend who otherwise wouldn’t have been able to, and also allowing them to choose a major that aligns with their passion,” Linda Monasmith says.

In addition to establishing the scholarships to honor their parents, the siblings recently gave a leather-bound volume of 1947 Clarions to the University’s archives. “Working on The Clarion meant so much to our mother, and the DU archive is the perfect place for the bound copies,” Sharon Kane and Susan Schmitz say.

Dave, a graduate of the mass communications program (now Media, Film and Journalism Studies), carried on his mother’s legacy as a journalist. Now retired, Dave long enjoyed what he called the “public service aspect” of his career as a filmmaker with the U.S. Forest Service.

“As the Steinke family honors their mother, Doris Davenport Steinke, for her trailblazing work as one of the first female editors of The Clarion, we’re reminded of what a difference educational opportunities can make,” says Lynn Schofield Clark, chair and director of the Estlow Center for Journalism & New Media in the Department of Media, Film & Journalism Studies. “We’re thankful that, because of the Steinke family’s generous gift of scholarship funds, future students interested in the exciting work of media, film, journalism studies, or strategic communication, will be able to pursue their educational dreams.”

Because of the legacy that Gene and Doris instilled in each of the siblings, they all say the University holds a special place in their hearts. And because of their visionary generosity that extends their parents’ legacy, future DU students will find educational and career opportunities beyond what they otherwise would have known.