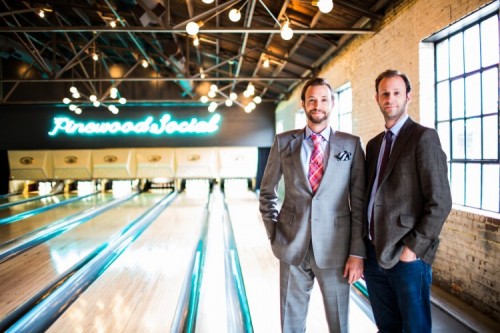 If you’ve been to Nashville recently, you know the city has a lot to offer, including a booming nightlife and restaurant scene that has managed to stay modern while adapting to the tastes of its residents and visitors.

Part of that change can be attributed to University of Denver alumnus Max Goldberg (BA ’05), who, along with his brother Benjamin, owns Nashville-based Strategic Hospitality. Over the years, the company has helped reshape the city's dining and nightlife landscape by introducing innovative, one-of-a-kind concepts such as Paradise Park, a kitschy honky-tonk bar and restaurant featuring live music; and The Patterson House, a sophisticated speakeasy-style cocktail lounge. The company also provides consulting and management services to other hospitality groups.

In the last 10 years, Goldberg and his brother have grown Strategic Hospitality to be a major player in the hospitality industry. They now have more than 500 employees and own 11 properties.

“We are trying to bring thoughtful and genuine hospitality to the city. We try to open places that are similar to where we are in our lives at the moment — whether that’s a crazy honky-tonk on Broadway or an intimate, chef-driven restaurant that has only 22 seats,” Max Goldberg says.

Goldberg, who had previously worked for a financial and marketing consulting agency in New York, joined his brother at the company in 2007, one-year after it opened. Moving to Nashville wasn’t a foreign idea to Goldberg. In fact, Nashville was a familiar site. It was the city he grew up in; the place he called home.

“[Benjamin] asked me if I would be interested in coming back and growing this company with him. He felt like Nashville was on the cusp of some really exciting things and he wanted to be a part of it, but he wanted to do it with me,” Goldberg says. “We talked things over for quite a while and knew that it was a big leap. But in August of 2007, I left New York and moved back to Nashville to run Strategic Hospitality with him. Since then, we’ve opened eight more places and we have learned and grown immensely.”

Today, the brothers operate an array of bars and restaurants that are as individual and unique as the city itself. Other properties include: Aerial, a glass-encased rooftop, private event space overlooking downtown Nashville; Merchants, an historic, rejuvenated, three-story restaurant; The Catbird Seat, an intimate and interactive 22-seat chef-run eatery; Pinewood Social, a gathering spot that includes a bar, restaurant, bowling lanes, outdoor bocce ball court and dipping pools; Le Sel, a French brasserie and bar; Bastion, a neighborhood bar and 24-seat chef-driven restaurant; The Band Box, a seasonal outdoor bar, restaurant and entertainment venue located in First Tennessee Park; The Country Club, a nine-hole miniature golf course that USA Today named as one of the top 10 mini-golf courses in America; and Henrietta Red, an American restaurant and barroom. 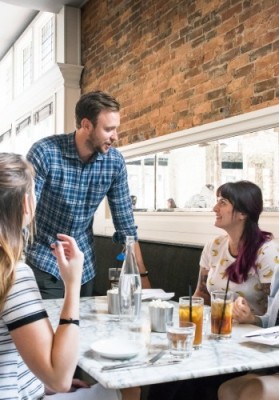 Their businesses are not only popular but are receiving top accolades from the culinary industry, including six James Beard Award nominations. Additionally, Bon Appétit recently named Bastion and Henrietta Red as two of the 50 best new restaurants in America.

For Goldberg, who studied business management and economic at DU’s Daniels College of Business, Strategic Hospitality is about more than just creating one-of-a-kind experiences for his patrons or coming up with the next big thing. For him and his brother, it’s about giving back to their city.

“[We want] to continue to create jobs and add value to the community here in Nashville. I take a lot of pride in all the amazing things going on in this city,” says Goldberg, who was once named as a Forbes 30 Under 30. “I’m so proud to be from here and I hope all the things we do continue to make it an even better city for years to come.”

Doing that takes hard work, Goldberg says — one of the many things he learned the importance of while at DU. He served as student body president and social chair of his fraternity and ran a business off campus — all endeavors that allowed him to sharpen his leadership skills.

Goldberg credits Carl Johnson, executive director of Campus Life, for helping him cultivate his experiences and relationships at DU. He says Johnson coached him through two years of college, where Goldberg learned that decision-making comes out of fear or love and that it’s important to apply the practices he learned at DU to both his business and family life. The two remain close, and Johnson recently visited Goldberg in Nashville.

“I wouldn’t be the man I am today without him — personally or professionally. He has been a critical force in my life,” Goldberg says.

Owning a business is one thing; operating it well is another. While Goldberg loves what he does, he says it’s not as glamourous as some people make it out to be. Having eaten many meals over a trash can and gone many days without seeing his wife, Goldberg can attest to the hard work and lonely dinners it sometimes takes to make a hospitality business successful.

“While it’s a lot of work, it’s also a lot of fun” Goldberg says. And to those looking to achieve similar success, “I would tell someone to strive to be the hardest worker in the room, recognize your strengths and weaknesses, and work with people who complement them.”