Troy Terry Will Skate for Team U.S.A. in Olympics 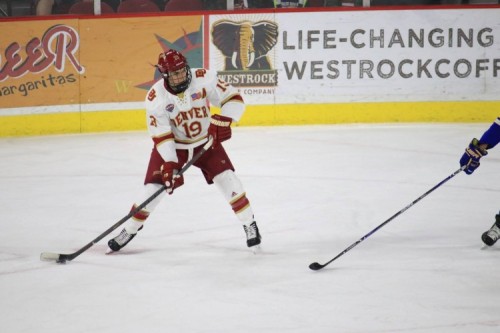 For Troy Terry, 2017 was a remarkable year. Last January, the junior DU hockey player helped lead the Americans to a gold medal in the World Junior Championships. Three months later he was on the ice in Chicago, as the Pioneers celebrated a national championship. And just as 2017 came to a close, Terry learned he would be skating with Team U.S.A. in the 2018 Olympics next month.

“If you’d told me a year ago that I would have had a chance to play at the Olympic level, I wouldn’t have believed you,” Terry says. “There’s something about wearing the red, white and blue when you’re on the ice. To have the U.S.A. jersey on and be on Olympic ice is going to be pretty surreal.”

Terry wore the Team U.S.A. sweater while competing in the World Junior Championship. He led the team to the gold medal by scoring a total of four shootout goals in the semifinal and championship games.

“I know some people might be upset about it, but it’s a tremendous opportunity for me, and I’m lucky that I’m able to take advantage of it,” Terry says. 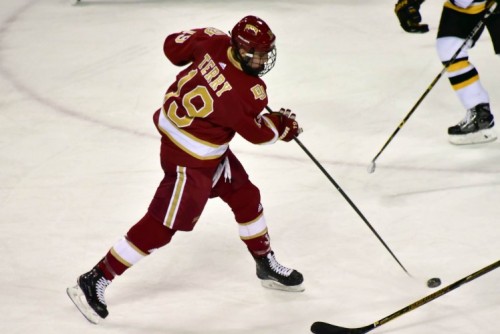 Terry is second on the Pioneers team in total scoring and ninth in the country. DU coach Jim Montgomery knows that kind of production can’t be replaced for the four games Terry will miss, but the experience he’ll bring back to the team could be invaluable.

“[After the Junior Championship,] he understood the pressure of big moments, how to handle it and how to excel,” Montgomery says. “The other thing he shared when he came back was how special a place our locker room is because how much everyone cares.”

Terry will become the first current student-athlete at DU to skate in the Olympics for Team U.S.A. hockey. Montgomery has already talked to him about taking advantage of the next month of games and practice to make sure he’s playing his best hockey. The Highlands Ranch native knows when he takes to the ice in PyeongChang, South Korea, an entire country will be watching.

“I take a lot of pride in being from Colorado,” Terry says. “When I go to this event, I will be representing my school, my family and my state. It’s really special to know that I’m representing something bigger than myself.”