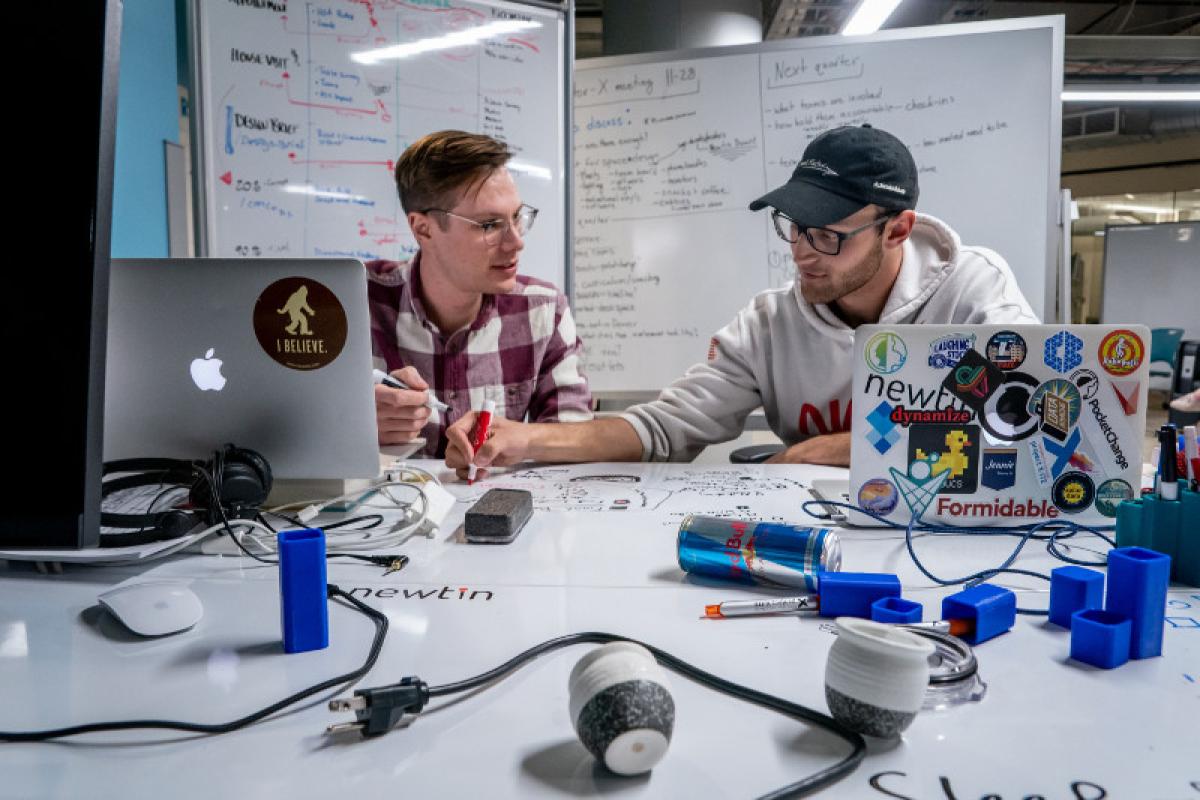 When the University of Denver’s most motivated student entrepreneurs want to develop and test their latest ideas, they can now retreat to a new creative hub they have come to call “the Bunker.”

Sequestered deep below the Cable Center, located on the northwest corner of campus, the space is at once barren and chaotic, an industrial warehouse vibe accented by multicolored wires that snake the ceiling. Sticky notes are everywhere, and everything — the walls, cubicle partitions and even the desks — seems to be a dry erase board, scribbled with sketches and notes.

Josh Hoeg is hunkered down in the middle of it all. If the senior’s big idea is going to become a profitable startup business, it will be thanks in no small part to this space.

Welcome to Incubator X, the newest resource for the student entrepreneur. DU’s Project X-ITE, the Daniels College of Business and the Innovation Floor at the Ritchie School of Engineering & Computer Science are piloting the program, placing three dozen student-led ventures in the same workspace, constructing a competitive yet collaborative environment.

“[There are] great people, great friends that are also starting all these amazing companies,” Hoeg says. “[They have] amazing ideas and talents. Putting them all in one space and giving them the opportunity to collaborate and innovate together is just something that I think is more powerful than giving a ton of people a ton of money, or giving a ton of people the most advanced tools.”

There is certainly no shortage of resources in the Bunker, which can be accessed from 6 a.m.-midnight, seven days a week. Any undergraduate or graduate student can submit an application to join Incubator X. If accepted, students gain a workspace, industry experts and a network of mentors who can help their ideas get off the ground. On an evening in February, for example, Hoeg is listening as a panel of lawyers discusses the best way to register a business, the intricacies of copyright law and the tricky aspects of corporate taxes.

He is the co-founder and chief technology officer of BloomTime Design. By connecting homeowners with landscape designers, Hoeg is hoping his clients will be able to design yards that save water and create healthy environments for pollinators like bumblebees. 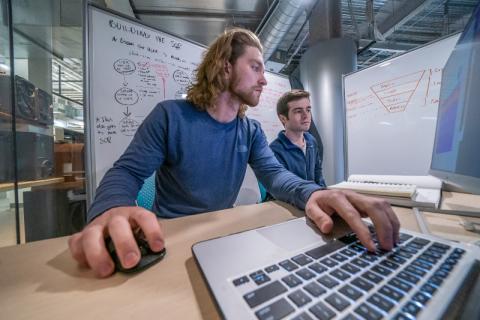 Incubator X, he says, has allowed him to begin building a team to help. BloomTime has hired five students who receive credit in exchange for their time. Just as helpful, Hoeg adds, are his classmates — the other skilled entrepreneurs with whom he shares the space. Some startups are in their earlier stages, but he is also surrounded by more established DU businesses like Atomata, PocketChange and Slope Threads. For advice, he can look to Amelia Coomber (BS ’18), who serves as a program director and also uses the space to develop her brainchild BB & Co. (formerly Boobi Butter). Alumni have access to Incubator X for two quarters after they graduate.

“It feels like that Silicon-Valley-startup-in-the-basement kind of thing,” Coomber says. “Everyone that comes down here has a high caliber of work ethic. They’re not down here to mess around. These are students who, when they aren’t in class, are spending the rest of their time working on their companies.”

Coomber checks in continually with each of the student-run companies, making sure they are on track with fundraising goals and answering questions from her fellow entrepreneurs.

“I’m obviously young, but working with the freshmen is a whole different kind of young, and I can definitely relate,” says Coomber, who just last year received a degree in computer science. “I’m at a point where I think I’ve learned a lot, and I have a lot of advice to give, especially in the department of what not to do. All of these things repeat themselves, and the problems that I experienced are very similar problems to what a lot of other people are experiencing.” 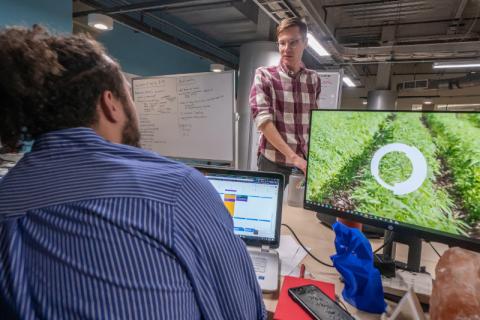 By all accounts, Incubator X is able to strike a unique balance. Though each company is scrambling for a foothold in a competitive business environment, the budding entrepreneurs also see the Bunker as a “safe space” for innovation, where each is invested in the other's success.

Project X-ITE wants Incubator X to be the first stop in a progressive track of programs, teaching students to succeed or fail fast and build connections in the community.

Hoeg, for one, says the University is well on its way to creating a distinctive entrepreneurial culture.

“DU has grown up so much in the entrepreneurial ecosystem,” he says. “When I was a freshman, there was no Entrepreneurship Club; there was no Project X-ITE; there was no Maker Space in the engineering building. None of these resources were here. … I don’t know what I’d do without this space or these people.”