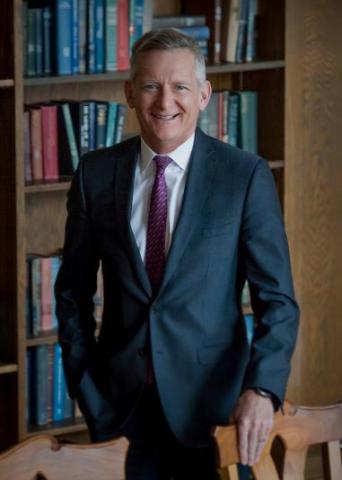 The University of Denver’s Board of Trustees announced Thursday their appointment of Jeremy Haefner as the University’s next and 19th chancellor. Haefner currently serves as DU’s provost and executive vice chancellor. The Board voted to appoint Haefner at their quarterly meeting Friday, June 7.

The appointment comes after current Chancellor Rebecca Chopp’s April announcement that she would step down in July due to serious health concerns. Since Chopp’s announcement, the executive committee of the Board engaged with DU’s Faculty Senate, vice chancellors, deans, several affinity groups, the broad community, and national experts in higher education to explore what DU needs and wants in its 19th chancellor. The Board evaluated the highly competitive nature of the current and future higher education landscape; it also took into account the importance of sustaining the focus and momentum created on campus, as well as the University’s – and the Board’s – profound commitment to an environment of diversity and inclusivity.

In a letter sent to the DU community earlier today, Board Chair Denise O’Leary said, “After extensive study, many consultations, and much reflection, the Board heartily concluded that our community has, in Jeremy, a national thought leader in student and faculty success, a great communicator, and an individual personally committed to advancing the University and further expanding our diverse and inclusive community and shared values. Since he arrived on campus, Jeremy has demonstrated that he is uniquely capable of carrying forward and enhancing the vision of our strategic plan, DU IMPACT 2025.”

During his time as provost and executive vice chancellor, Haefner has championed transparency and respect for shared governance by deepening faculty and administrative governance systems. He spearheaded efforts to share more regular and thorough updates on the University’s budget process, created more open and frequent lines of communication, and embodied respect for DU’s teacher-scholar model. He has engaged the campus in the implementation of DU IMPACT 2025 by creating an exciting path for undergraduate and graduate education that will distinguish DU, solidify our value proposition, and position the University for the years ahead.

“The University of Denver is an extraordinary private university known for its mission to serve the public good,” said Haefner. “It is a place where students receive an excellent, holistic education that prepares them for life and careers in the 21st century. It is a place where faculty are world-class teachers-scholars-practitioners, and where the staff play an essential role supporting students and faculty. Our future success will be built on the strong foundation set by our strategic plan, DU IMPACT 2025, and by our history of great leaders. I am honored to have been chosen by the Board of Trustees to serve as the University of Denver’s 19th chancellor.”

Upon joining DU in 2018, Haefner served as a faculty member and academic leader in higher education for nearly three decades. Before DU, he served as provost and senior vice president for academic affairs at Rochester Institute of Technology (RIT) for 10 years. There, he worked with the faculty to develop and help implement RIT’s academic direction to ensure the success and effectiveness of its academic colleges, graduate studies, institutes and three global campuses.

Haefner holds a Ph.D. in mathematics from the University of Wisconsin and a bachelor’s degree from the University of Iowa. His publications can be found in Communications in Algebra, the Journal of Algebra, American Mathematical Society journals, and others. He also publishes on issues and topics in higher education, including supporting diversity in university leadership and enriching the student experience.