University of Denver Ready to Drop Puck on New Season

All regular season games this year will be against NCHC opponents 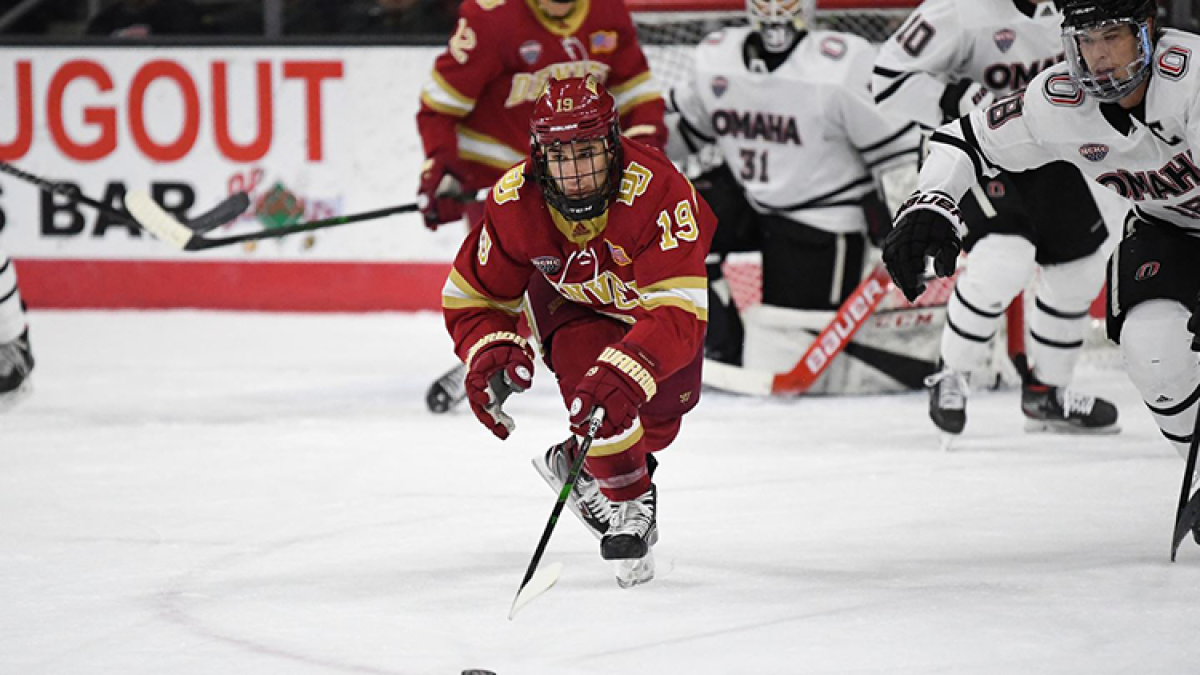 In a year that has been anything but ordinary and plagued by many unfortunate firsts, the University of Denver hockey team is embarking this week on a first of its own. Following the strategy of both the NHL and the NBA, the National Collegiate Hockey Conference (NCHC) is beginning the season in a “pod” to mitigate the spread of COVID-19. In pod play, the conference’s eight teams will be limited to playing each other for the first leg of the season.

“It’s going to be unlike anything we have ever done,” says David Carle, the Richard and Kitzia Goodman Head Coach. “It’s going to be unique, so we are trying to prepare the guys as best we can by exposing them to people who have experienced [the pod system].”

That means calling upon some old friends. Paul Stastny, who played for the Pioneers in the early 2000s and spent 55 days in the NHL bubble with the Vegas Golden Nights, spoke with the entire team about the experience. As did Derek Lalonde, an assistant coach at DU for five years who served as an assistant this year for the Stanley Cup champions, the Tampa Bay Lightning. Both talked about what did and didn’t work and explained what Denver can expect as they prepare to start play this week in the pod at Baxter Arena in Omaha, Neb.

“The No. 1 thing that seemed to work was having an attitude of gratefulness that we even have the opportunity to do this,” Carle says. “The second thing that really stood out was maintaining your mental health, because it is an odd environment where you can’t go anywhere, you are constantly under watch and not allowed to leave a certain place.”

DU will open the season on Wednesday night against Minnesota Duluth, and over the next 19 days will play a total of 10 games against five conference rivals. Their first opponent will be No. 4 ranked Minnesota-Duluth. Two nights later they will face top-ranked North Dakota.

“It’s going to be tough and a bit of a grind playing so many games in a short period of time. It’s something we’ve never had to do in a college atmosphere before,” says senior and team captain Kohen Olischefski. “We have never started a season with Duluth and North Dakota back-to-back, so that’s going to be a different challenge for us, but obviously they are in the same boat.”

The student-athletes and coaches are ready for the challenge and grateful for the opportunity to play. However, getting to this point has not been easy. To limit any potential cases of coronavirus, the team has spent the fall primarily in three different cohorts. It was not until recently that they were able to get on the ice together.

Olischefski acknowledges the discipline required by everyone on the team to stay safe. A positive test could easily derail their season, and no one, he says, wants to see things end the way they did last year, with the cancellation of the season just as postseason play was getting underway.

“The way things ended last season was obviously not satisfying,” he says. “In past years when we’ve made it to the Frozen Four and lost, at least there’s some closure there. Last year just feels like a complete missed opportunity, so there’s been an itch ever since to get going again.”

Once the Pioneers leave the pod, they will have 16 games over the remaining two months against only three different schools: Colorado College (six games), Omaha (six games) and North Dakota (four games). Once again, Denver expects to be in a position to compete for a national championship once the postseason begins. However, no matter how the season ends, the team is grateful to be able to be on the ice.

“Last year was a hard thing to go through, but it makes you realize how much you love the game,” Carle says. “We are really grateful and thankful that people have put in a lot of work to allow us the opportunity to even be here going to school and on top of it to be on the ice practicing and working on our game.”