It might not be the typical backdrop for a discussion about the election, but Denver’s Great Divide Brewery was the place to be last week for an open talk about politics, civic engagement and the current election season.

“I am going to vote,” Ike Ogbuike admitted. The DU alum was one of more than 200 people who attended the “Beers and Ballots” event hosted by the University of Denver Alumni. There were multiple purposes for the event. First and foremost, it allowed DU to engage the community around an important topic. 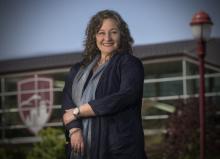 “One of the hallmarks of our University is to be a great private University dedicated to the public good, and part of the public good is being involved in your community and being involved in the governance of our society,” explained Amanda Moore McBride, the Morris Endowed Dean and Professor in the Graduate School of Social Work. She moderated a panel of social workers and others committed to social change, including Denver City Councilwoman Debbie Ortega.

Another goal of the event was to engage DU alumni. “As part of the DU IMPACT 2025 strategic plan, we are committed to engaging our alums and bringing them back to campus,” said Shelby Glenn, executive director of external relations. “This allows us to re-engage on a whole new level than we have before.”

One way to help with engagement is to incorporate alumni in the planning of an event. Great Divide Brewing was created by a DU alum who graduated from University College. While the beer may have played a role in enticing students, alum, faculty, staff and the Denver community to attend the panel discussion, attendees were thrilled to have an opportunity to engage around politics in a way that was constructive and informative.

“I felt that the real way to create change is to be involved in the community, so I’m so excited that this event was planned,” said Victoria Garrick, a student in DU’s Graduate School of Social Work.