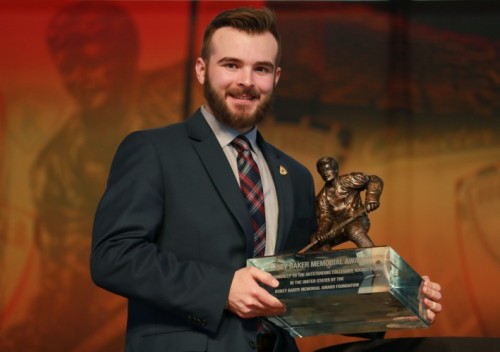 Will Butcher has been awarded the Hobey Baker Memorial Award, recognizing college hockey’s top player. The announcement came Friday night during a ceremony held at the Aon Grand Ballroom at Navy Pier in Chicago, Ill.

Butcher becomes only the sixth defenseman in the 37-year history of the Hobey Baker award to be named a winner. He is also the first defenseman to be nominated as one of the Hobey hat trick finalists in eight years.

“First, I thank my teammates because without them this honor would not have been possible,” Butcher said moments after winning the award. “I believe this award to be a team award. As I accept this award, I accept it on behalf of the entire team at DU.”

Butcher also thanked his parents, brother and sister, his grandparents and girlfriend for the sacrifices they have made while allowing him to chase his dreams.

“My focus is on the team right now, and whatever I can do as a captain for this team to make it and take it where we need to do,” Butcher said before leaving for Chicago for the Frozen Four. “I’d much rather win a national championship with the guys and be a part of that. That means way much more to me than the personal accolades.”

As team captain, Butcher has helped guide the Pioneers to the No. 1 ranking in the nation. Entering the national championship game, the senior has scored seven goals, dished out 30 assists and his 37 points are second in the nation by a defenseman. Butcher’s performance on the ice had led to numerous other awards including: NCHC Player of the Year, Offensive Defenseman of the Year and for the second straight season, First Team All-Conference.

Butcher is only the second Pioneer to ever win the Hobey Baker Award. In 2006, DU defenseman Matt Carle also won the award. He went on to play in the NHL with the San Jose Sharks, Tampa Bay Lightning, Philadelphia Flyers and Nashville Predators.

Butcher is a fifth-round draft pick of the Colorado Avalanche from 2013. If the Avalanche don’t sign Butcher before August 15 he will become an unrestricted free agent.

Also honored on Friday night was Junior Tanner Jaillet. He was named the winner of the Mike Richter Award as the most outstanding goaltender.

The NCHC Gaoltender of the Year and a member of the All-NCHC First Team, Jaillet has posted a 27-5-4 record, ranks second in the nation in wins and winning percentage, third in goals-against average and eighth in save percentage.