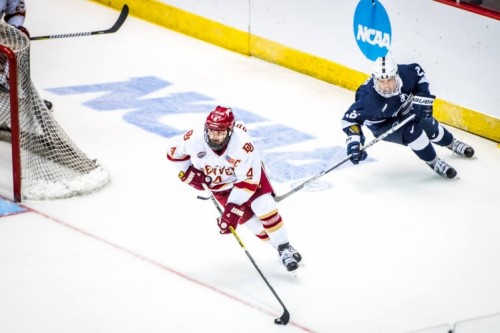 “I have to give a lot of credit to my teammates, almost all the credit, because I wouldn’t be here without them,” Butcher says. “A lot of those guys have done some things with the puck where I just move it up off the wall or something and they go down and do some unbelievable move or some unbelievable pass, and they end up scoring a goal. TJ [Tanner Jaillet] has helped my plus/minus tremendously; that guy has been unbelievable. When he’s in the net, and [Evan] Cowley too, it’s pretty easy to play with confidence and have the season that I’ve had so far this year.”

The three finalists were selected from an initial list of top 10 candidates by a 27-member selection committee and online fan balloting. Criteria for the award includes: displaying skills in all phases of the game, strength of character on and off the ice, and sportsmanship and scholastic achievement.

On the ice this year, Butcher has seven goals and 29 assists. He is captain of a DU team that ended the regular season with a conference championship and that spent much of the season ranked No. 1 in the country. Off the ice, Butcher is a business major and volunteers for Hockey Saves, a group that assists military personnel playing hockey.

Of the three finalists, Butcher is the only player to play on a team competing next week in the Frozen Four for a national championship. He says that’s where his attention is right now.

“My focus is on the team right now, and whatever I can do as a captain for this team to make it and take it to where we need to go,” Butcher says. “I’d much rather win a national championship with the guys and be a part of that. That means way much more to me than the personal accolades.”

Matt Carle (2006) is the only Pioneer to have ever won the Hobey Baker Award. He went on to play in the NHL with the San Jose Sharks, Tampa Bay Lightning, Philadelphia Flyers and Nashville Predators.

This year’s Hobey Baker Award winner will be announced on Friday, April 7, in Chicago, Ill. at the Aon Grand Ballroom at Navy Pier. The ceremony occurs the night before the national championship game at Chicago's United Center.