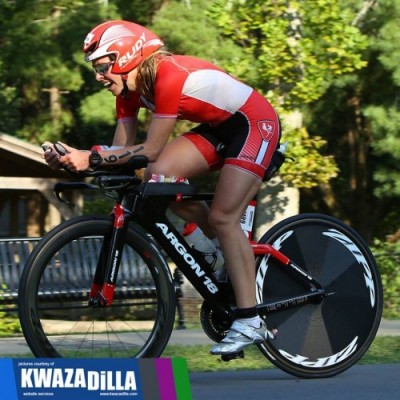 Most of us would say that we live pretty busy lives. Between work, family, friends and other activities, there is rarely extra time in a day. Saying that Molly Smith has a busy schedule might be a big understatement. She works with adjunct faculty in University College by helping them apply their expertise to lessons in the classroom. When she’s not doing that, you might find her teaching a class as an adjunct faculty member; in Ruffatto Hall, working on her dissertation; or perhaps at the Ritchie Center for one of two daily workouts training for her next Ironman.

The University of Denver has become like a second home for Smith. As a Boettcher Scholar, she came to DU as an undergrad and received her degree in human communications with a minor in business. She received her MBA from the Daniels College of Business before deciding to work for the Boettcher Foundation.

“I had a great sense of gratitude for the educational opportunities they had made possible for me, so I wanted to give back,” Smith says.

After several years, Smith felt her true passion might be in teaching. She received a second master’s, this time in education, from Colorado State University, and then decided to come back to DU to work in her current position and pursue a PhD from the Morgridge College of Education.

“DU is a really special place,” Smith says about the opportunity to work for her alma mater. “I had this amazing experience here as a student, so I thought, ‘gosh, wouldn’t it be neat if I could come back and provide the same experience for other students?’”

While teaching might be her passion, her biggest enjoyment comes in competing as a triathlete. Smith says racing in her household is a family affair. Her husband, Matt, is her trainer and also a triathlete.

A half Ironman is a total of 70.3 miles. It consists of a 1.2-mile swim, a 56-mile bike ride and a 13.1-mile run. Approximately 2,000 women compete in the world championships, and Smith’s goal this year was to make the podium. 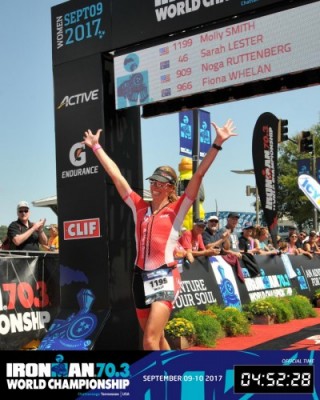 “I was hungry for this,” Smith says. “It was something that I had thought about for basically two years.”

“I was really at peak fitness,” she says. “This was the best-prepared I have ever been to compete at this distance.”

Smith achieved her goal. She was the second woman in her division to cross the finish line and recorded the fifth best time among all amateur females. But Smith was just getting started with her racing success. The very next weekend she competed in a half Ironman in Colorado and finished second overall to a professional runner. Four days later, she ran in DU’s Crimson Classic, finishing with the second-best female time.

“That one was more for fun,” she says. “If I had fresh legs, I’d like to think I could have done better.”

Smith thought that was the end of her racing season, but then she decided to add one more. Her husband was guiding a visually impaired athlete for Ironman Maryland. She was planning to make the trip, but didn’t intend to compete since it was a full Ironman and she had just completed back-to-back races.

“I was really fit, I was coming off of a really great season and I’ve already done a lot of the training so I thought, ‘maybe I should give this a try,’” Smith says.

She made the right decision. It took her just under 10 hours to complete the 140.6-mile course. She had the top time of any female competitor and finished nearly 13 minutes ahead of second place. It was the first time she had ever competed in a full Ironman.

“Going into the race and not having any expectations was a gift,” Smith says. “Sometimes I feel like I go into races with high expectations, but to have the day turn out the way that it did was truly surreal.”

Smith plans to continue training and racing in 2018. This summer she will complete her dissertation, but she is still undecided on what she will do next.

“The world has a way of introducing opportunities that sometimes you are just supposed to walk through the door, take a risk and say, ‘I’ll give it a try.’”