Tyler Michael, left, and Tommy Crosby prepare to embark on their 15,000 mile trip from Denver to Patagonia. (Courtesy: The Spoken Tour)

One day into college, and Tyler Michael could already tell. He didn’t like Tommy Crosby.

“You know we didn’t hit it off great at first,” Michael says with a laugh. “I think because I was kind of shy and reserved at the time, I thought he was a little arrogant.”

“I had a killer first impression, as you can tell,” Crosby chimes in.

Fortunately for the two geography majors, it was the second impression — “an olive branch in the form of a cold beer” — that counted. Now they’re spending just about every second of the next year and a half together.

That’s because the only thing comparable to how far they’ve come as friends may be how far they’re going, as they snake their way roughly 15,000 miles through two continents, cycling from Denver to the bottom of South America.

“It’s been very cool watching our friendship evolve and turn into something that neither of us expected it to,” says Crosby. “You realize how much you depend on that person.” 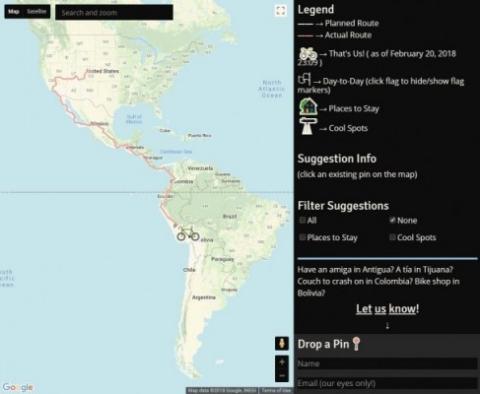 A love of adventure and the outdoors helped bring Michael (BA ’14) and Crosby (BA ’14) to the University of Denver campus, which they left just about every weekend to hike, climb or ski. Years after graduating and parting ways, they began to hatch a plan to reunite for an extended trip — something human powered that could leave from Crosby’s house in Denver. Over the course of the next nine months they sketched a loose path as far south as they could go.

They left jobs they enjoyed and, on May 8, 2017, literally rolled out the front door.

And then they stopped to check their smartphones for directions.

“We didn’t know what the first 10 miles of our trip was going to look like,” Michael says, laughing.

“It’s been a lot of flying by the seat of our pants,” Crosby adds, “which has been pretty fun.”

Since, things have generally gone more smoothly. The pair maps a tentative route every few days when WiFi is available. But every day still brings something new and unplanned.

“We didn’t know what we were hoping for,” says Michael, speaking from Quito, Ecuador, roughly halfway through the trip. “But it’s certainly given me the full feeling of happiness that I was looking for.”

Despite the mental and physical challenges, these Pioneers say they’ve found comfort in the uncomfortable. It’s more or less a necessity when camping on the side of a road, riding through nasty weather or traversing the grueling hills of Central America — all of which they have documented through their website, Instagram account or podcast. Instead of obstacles, things like finding bike repairs or visiting a shady neighborhood have become opportunities.

The people they meet have been quick to provide food, money, advice and insight into the culture of places that are barely on the map, much less in any guidebook or tourism brochure.

“I don’t think we’ve ever been able to give less to other people,” Crosby says. “We’ve been in this position of really learning how to receive in a way we never have. People have just been so selfless and so willing to help us. And that’s something I’m so stoked to bring back to Denver … just a new idea of what it means to give and how much of an impact that can make on someone’s life.”

They’re not stopping for souvenirs. And yet, when they finish their journey in August or September — after flying to St. Paul, Minn. and pedaling a “victory lap” back to Denver — Crosby and Michael say they will have brought back much more than they could ever carry with their 100 pounds of gear.

“I think I’ll have a new appreciation for the meaning of perseverance and a new vision of what we are capable of accomplishing,” Michael says. “I don’t see there being any way that we come back from this trip with anything but pride in what we’ve accomplished.”

Just don’t ask them how they’re going to top it.

“I almost get frustrated when people say: ‘it’s once in a lifetime, you’re never going to do anything this great again,’” Crosby says. “We’re not peaking at age 26. This awesome experience is going to fuel other parts of our lives."