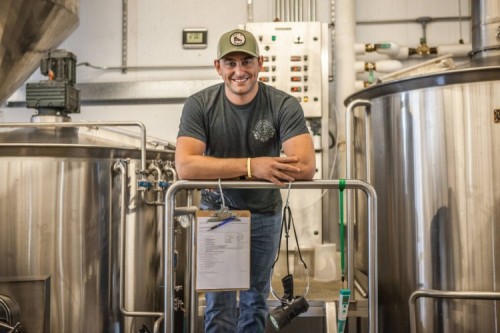 Q: 4 Noses has been open for three years now; is there a specific beer that has emerged as your flagship product?

A: I always hesitate to call a beer a flagship. I think it kind of ties you down to that product. I like the idea of being flexible and always having the ability to grow and produce new stuff. That being said, our ’Bout Damn Time IPA is definitely our bestseller and one of our most popular beers. We’ve played around with that beer quite a bit. We did a double dry-hopped version of that that we released in the taproom on Aug. 1. We put a ton more hops in that version, which is not for bitterness, it’s all for aroma and flavor. It really pulls out an interesting characteristic in the beer, which is really fun to do.

A: The most important thing I’ve learned is how critical it is to have a solid and strong team. The interesting thing about beer is that a brewer doesn’t make beer. A brewer makes wort. Yeast makes beer, and yeast is finicky. It’s a microorganism that works on its own schedule sometimes, and we really are sometimes at its mercy. We’re also at the mercy of the consumer and the market, and without having a really strong sales force and brewing and production team and front-of-house team, when these things happen — when something doesn’t go as planned or we want to try a new project or whatever the case may be — if you don’t have those three parts of your team being really strong and independent, it makes operations incredibly difficult.

Q: This will be your fourth year at the Great American Beer Festival, and an exciting follow-up to last year, when you won a gold medal. What was that like?

A: It was a great feeling. That festival, there’s so many great breweries that enter it from all over the country, so to win a gold medal in anything was a great feeling and a huge accomplishment. Our Pump Action pumpkin ale actually not only won GABF, but it also won the World Beer Cup, which is the other big beer competition. The difference between that and GABF is that it allows foreign breweries to enter as well, and it’s only every two years. Last year was a really exciting time with our pumpkin beer, but our core isn’t really that beer. That beer is something that we do one or two months out of the year. We’re really excited to get some of our other beers up in front of the judges and see what they think. We are bringing the ’Bout Time IPA, plus an experimental double IPA, our German-style pilsner, Perfect Drift, a raspberry blonde ale and our tart mango wheat, which is our summer seasonal. We’re pretty excited to see what happens.

Q: Are there any of those you have a particularly strong feeling about, or are you equally confident in all of them?

A: It’s tough. I feel very confident in the quality of our beers regardless of the outcome, and I think the market has given us good feedback on all of these products. There are a little over 8,000 different beers that are being submitted this year, in 60-some categories, so there’s a little bit of luck involved. You have to get your beer shown at the right time to the right judge. If any of these beers come away with a medal, we’ll be totally happy.

Q: What do you like generally about GABF? Is it the chance to get your beer in front of consumers, the opportunity to network with other breweries, or something else?

A: The typical and constant answer would be marketing — 60,000 people come [to the festival] — but to be completely honest, I think it’s a little tougher for Colorado breweries. Most people who are coming into the state actually prefer to visit our breweries. The booths, except for maybe a couple from Colorado brewers, are not really the center of the show. But the big thing for us about GABF, and the most important thing to remember, is that it supports our industry. It’s put on by the Brewers Association to raise money for that organization that I firmly believe protects craft breweries throughout the country. I think it shows support to other breweries that win medals, and it really speaks volumes to the industry that we are. It’s a really supportive and collaborative industry.