Achieve the Dream: Using Education to 'Prove Them Wrong'

Facing discrimination, Miriam Castillo went to school to fight back

Ahead of Martin Luther King Jr. Day and the annual Marade in downtown Denver, the University of Denver Newsroom is profiling students who are “achieving the dream.” This is the theme for the DU students, faculty and staff marching behind the University banner this year. For more information on the Marade, or to register, click here.

There was no one behind the knock at the apartment door. Just a note.

Her aunt and uncle needled Miriam Castillo to read it out loud. Maybe it was a message from a secret admirer, they joked.

The sixth-grader opened the letter and read the profanity-laced sentences that will never leave her.

“You wetbacks, why are you staying here? Go back to your country. You're not worth anything here.”

It went on, but Castillo had to put the paper down.

“I didn't know how to react,” says Castillo, the youngest child of a then-undocumented Mexican mother and now a third-year psychology and sociology student at DU. “I know up until that point I never thought people saw me or my family differently. But after that note, I did.”

Castillo, born in the United States, always knew her mom, who suffers from epilepsy, had to clean houses under the table to raise three kids on her own. She knew her mom could never find an official job.

But with that offensive letter in hand, she resolved to prove people like the author wrong.

Her weapon, she says now, was her dream: a college education — something no one in her family possessed.

The note came to mind as Castillo wrote her college application essay, as she visited campus and as she met people in DU’s Excelling Leaders Institute, which works to build leadership and community among minority students. 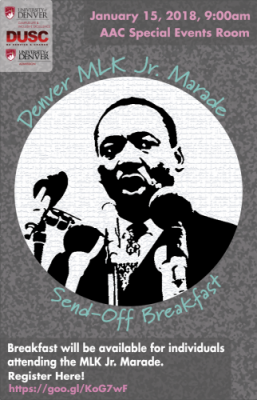 Castillo no longer felt “different,” despite the obstacles facing so many students with a similar heritage. They’re the obstacles she wants to take on, as she plans to march in the annual Martin Luther King Jr. Day Marade.

“I feel like in the Marade, you see the people surrounding you and you see you’re not the only person going through similar circumstances,” Castillo says. “We’re all striving for the same thing: We’re just trying to improve our lives and our communities. It’s not going to be easy, but it’s attainable.”

It’s certainly not easy for Castillo to wake up at 5:30 a.m. to catch the first of two light rail trains that bring her to campus each day. But she considers it an investment in her family and in this country’s future. She wants to pursue a doctoral degree after she graduates.

“If you firmly believe in something, stand up for it,” she says. “Go to school. Become smart. Educate yourself about things going on in the world. Find out how you can be a part of it and make it better.”