Alpine Club ‘Keeping the Stoke Alive’ for Generations of Adventurers

After 90 years on campus, DU’s oldest club is strong as ever

Lillie Baxter, a first-year DU student from Florida, has never seen this much snow in her life. The mountains her classmate, Illinois native Kaelan Dublin, grew up skiing now seem more like molehills. Seated with them in the lodge at Loveland Ski Area, first-year Lawson Montgomery recalls his camping trip to the Great Sand Dunes last fall, when the Virginian had never seen so many stars in the night sky.

For 90 years now, the DU Alpine Club has been opening eyes and dropping jaws, whisking DU students like Baxter, Dublin and Montgomery — students of all ages and ability levels — into Colorado’s wilderness. Since 1928, when the then-named Pioneer Ski Club planted its poles on campus, organized trips have shuttled students to outdoor recreation in the state’s natural beauty.

“To do this is what it’s all about,” Dublin says. ”Being in Colorado, it’s about maximizing your time outside. The whole ethos of the Alpine Club is just being out there.” 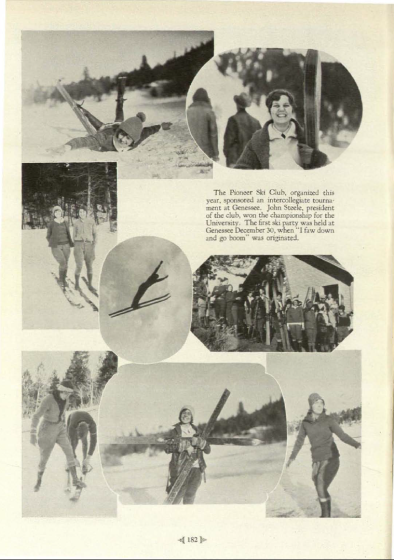 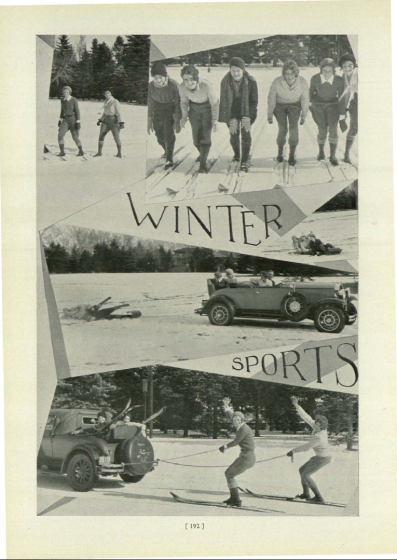 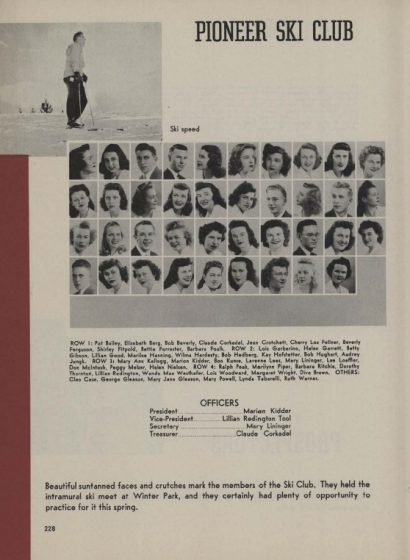 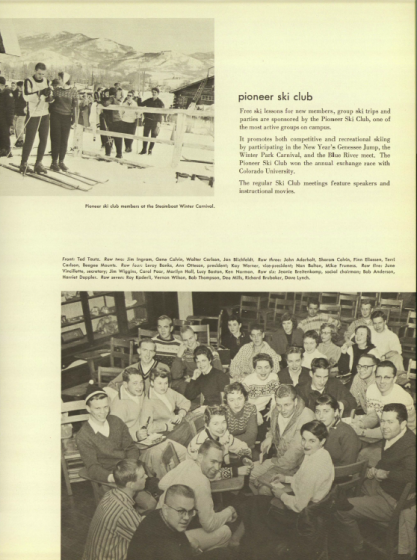 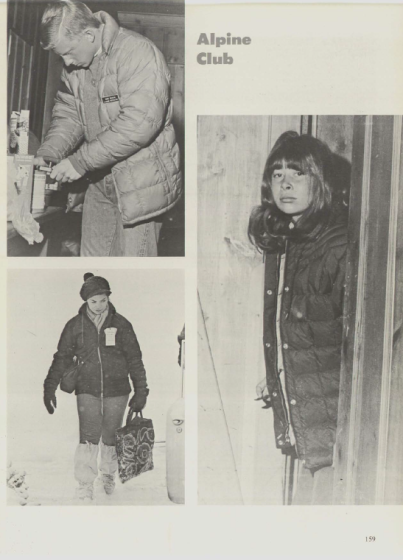 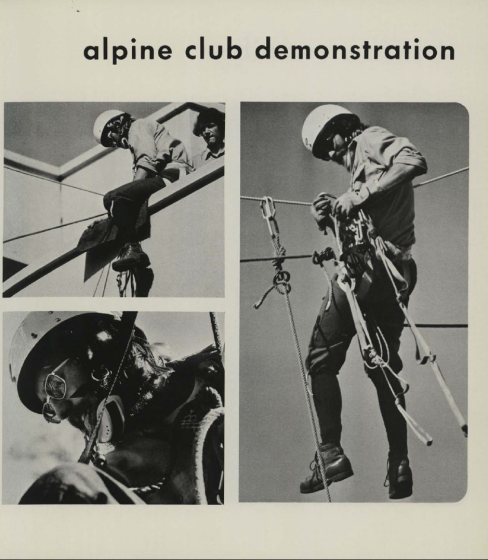 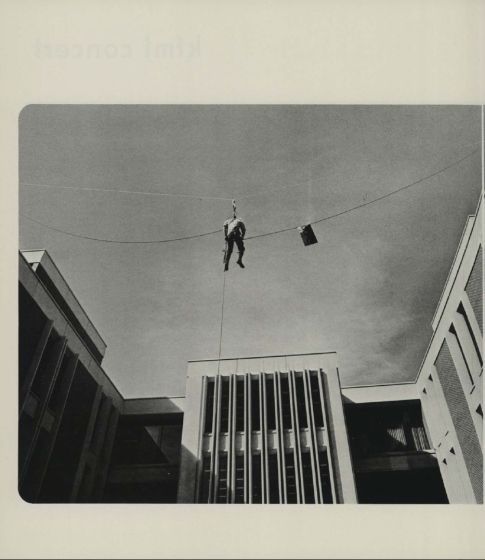 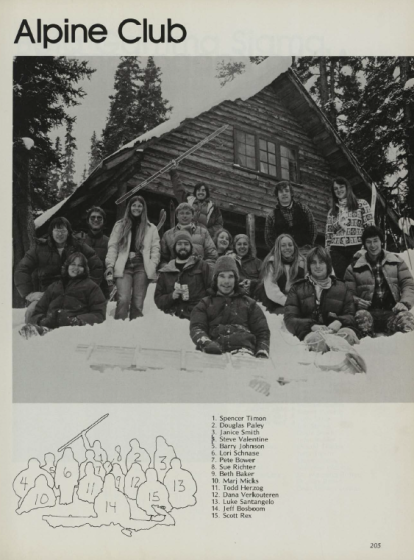 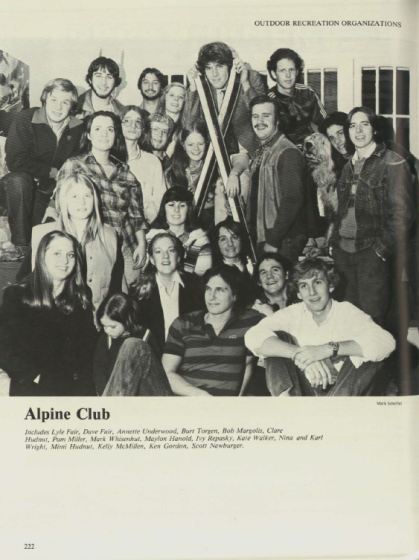 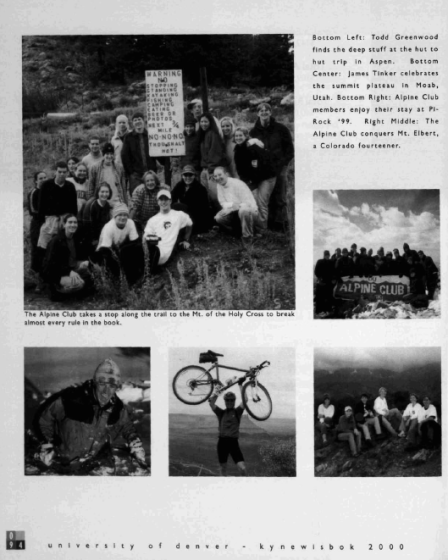 The oldest student organization on campus, the Alpine Club is also DU’s largest. Each year roughly 200-400 members feed their need for adventure, whether it’s on the ski slopes, hiking, biking, climbing, rafting, camping, snowmobiling or even dogsledding.

“I think it’s so popular because it really is all about the people,” says Johnny Youngs, the club’s president. “The selling point is you will meet people that are going to want to do things you want to do. It is more of a proxy or a conduit to get people involved with one another.”

From the minute Youngs stepped on campus, he knew the Alpine Club would be his future. For the Michigander enrolling at an out-of-state school, the organization was a way for him to find his comfort zone.

Now, serving in the club’s top post, he extends that comfort through a packed schedule of beginner-friendly events. Unless finals, midterms or homecoming are on the horizon, the Alpine Club has a trip scheduled. On any given weekend, charter buses full of students head to a major ski resort.

Not only is the volume of trips unparalleled, Youngs says, but so is the affordability. Though members pay dues, a subsidy from the school keeps costs low, allowing access to equipment, transportation and safety training at a fraction of the sticker price.

For alumna Brea Galvin (BS ’04), friendships forged in what she calls her “coed fraternity” have endured to this day. A fellow alumna is a godmother to her young son, who has playdates with another former officer’s children when they rendezvous in Wyoming. She still experiences nature with many of the people she met hiking, skiing and climbing in college.

“They’re strangers at the beginning [of a trip], and by the end they’re your closest friends,” says Galvin, who now works in Denver as a physical therapist. “Sharing it with someone breaks down barriers. You’re not so concerned with what major you are or what you’re doing during the week. You can be who you are, and nature brings out your innate abilities and interest to explore something.”

For Galvin, the opportunity to set foot off campus was also a chance to escape the stress of her studies in biology and cognitive neuroscience. But alumni say that’s only one of the club’s many benefits.

Michelle Connacher (BS ’18) calls her time in the Alpine Club her most valuable college experience. Now a ski instructor in Stowe, Vermont, she credits the club with encouraging her to make her passion her profession. Serving as an officer, she realized she wanted a job where she could work outside with a team. The wilderness first aid and avalanche safety training her leadership position demanded have proven essential in her post-college life.

“You can make a career [out of this],” Connacher learned. “You can be active and outdoors all the time and make it productive.”

Although the Alpine Club’s history is largely full of great adventures, it is also marked by tragedy.

In 2002, Kathryne Ellington, an 18-year-old transfer student, traveled with the Alpine Club to Telluride excited to try Colorado’s hallmark sport for the first time. Despite the company of two experienced skiers, Ellington crashed on an intermediate run and died from her injuries. She was not wearing a helmet.

“It was definitely a surreal experience for everyone,” says Galvin, who was on the trip and had encouraged Ellington to get involved in the first place. “It gave me a rude awakening.”

The club returned to campus in mourning, committed to make its activities safer than ever. As a result, Ellington’s parents worked with the club to create a yearly endowed ski trip for beginners.

Today, for around $30, new skiers can embark on the Ellington Memorial Ski Trip, which includes transportation, equipment rentals, a lift ticket and, most important, a lesson from a professional instructor.

“We make sure that everyone at least has the basics on how to be on the mountain responsibility,” says Morgann Monahan, a senior who serves as the club’s risk manager. “It’s really rewarding, as an officer, to drop off a bunch of kids at the mountain and they have no idea what to do. Some of them don’t even have the right clothes on. A lot of them are nervous. But then you leave at the end of the day and everyone is exhausted from skiing. I don’t think we’ve ever had someone have a bad time on the trip.”

That said, the reason the trip was created in the first place is not lost on Monahan. When organizing last year’s trip, she wrote a letter to the Ellington family.

“I just thought it was really important to thank these people and these parents that lost their child so traumatically and terribly,” she says. “An experience like that can really stain your perception of an experience, and instead they decided to create a foundation so that this doesn’t happen again or we can try to prevent it. And I thought that was really beautiful.”

It’s proof that those who serve as officers in the Alpine Club take the job seriously. They consider it an honor, shouldering close to a century of history and tradition.

“It gave me a full new sense of purpose in what I was doing in college,” says Connacher, a past president. “Keeping the good vibes that drew me into the club [in the first place] was my biggest purpose I felt I needed to translate to the new freshmen: the stoke. Definitely the stoke.” 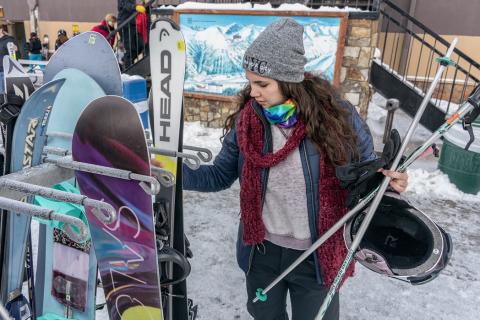 That sense of purpose and those good vibes are part of the Alpine Club’s tradition, even as it has evolved over the decades, discarding some activities and adding others.

No longer is the club running highline ropes between the two jutting towers of Sturm Hall as it did in the 1970s. A club cabin that stood near the top of Loveland Pass no longer exists—nor does the liftless Genessee Mountain where the Pioneer Ski Club planned its first events 90 years ago.

But more important to the current members are the things the Alpine Club has managed to preserve.

“We take the outdoors seriously and care about outdoor education,” Monahan says. “Beyond just getting outside, which is totally important, we’re teaching people about ‘leave no trace,’” a slogan that promotes conservation.

Youngs thinks that would resonate with the club’s earliest members.

“What the club is fundamentally about has been upheld,” he says. “We’re trying to keep the stoke alive, in an age of technology, in an age of changing preferences, but the principle of going out into nature and preserving nature and being an advocate for it and also trying to enjoy it during our time in school has most definitely been upheld.”