This article first published in the Spring 2019 DU Magazine. The University of Denver is hosting a special event with Mark Shaker focusing on how he's inspiring a generation of small business leaders to put community first. Learn more about the April 17th Pioneering Denver event. 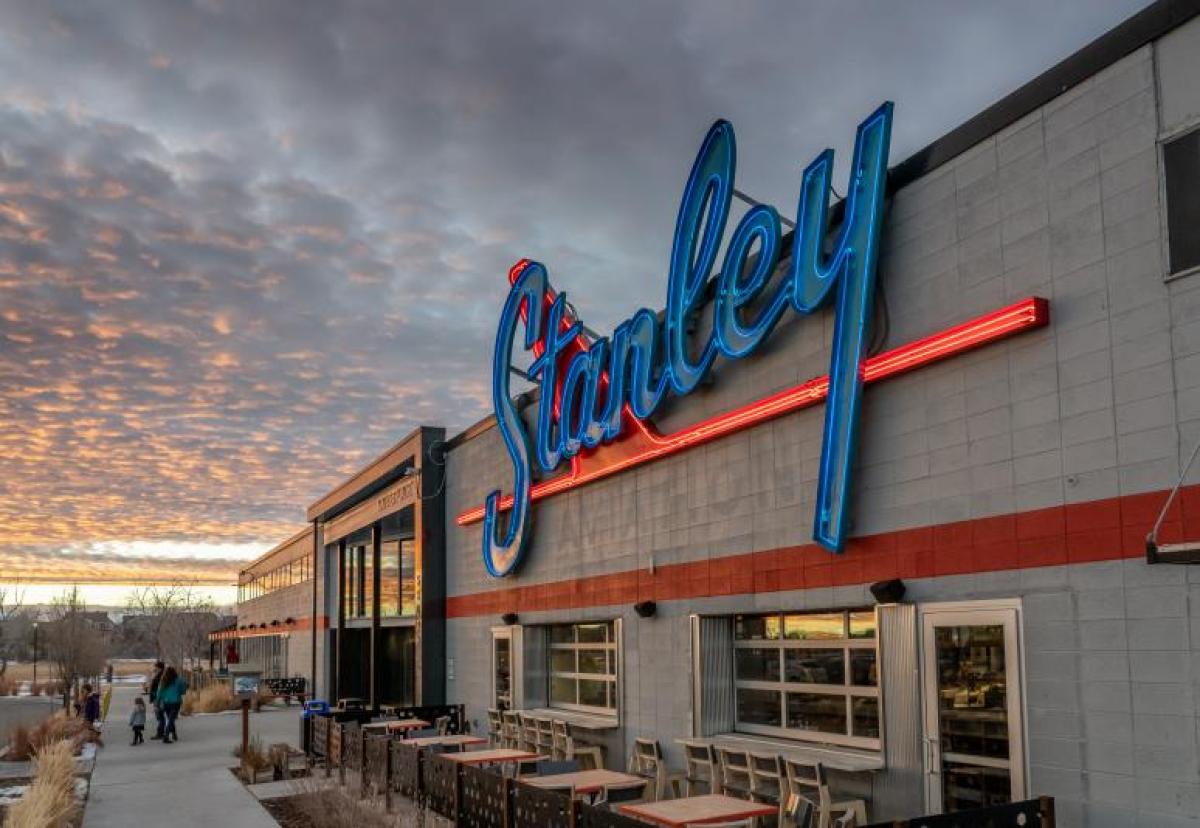 A reading from the Stanifesto:

This is no ordinary marketplace. We are a community of like-minded businesses and people who believe in doing things differently: sustainably, thoughtfully, creatively, with way more than the bottom line in mind. We have grand ambitions and we are guided by mighty beliefs.

What do you feel like doing tonight? Drinking a Mexican craft beer? Getting a pedicure? Having dinner at a James Beard Award-nominated restaurant? Taking a kickboxing class? Letting the kids learn how to build a robot? Shopping for new clothes? Getting some ice cream? Some doughnuts? Some pizza? Some empanadas?

All of this and more is on tap at Stanley Marketplace, part of the metro area’s lively food-hall scene, which includes a growing number of destinations: the Source, Avanti Food & Beverage, Zeppelin Station and Denver Central Market, to name just the most prominent.

But Stanley — located in a former aviation manufacturing facility in Aurora — runs a bit differently than its big-city brethren. Founded by DU alumnus Mark Shaker (MBA ’11), this marketplace wasn’t built for hipsters, or foodies, or coffee snobs — it was envisioned as a true community gathering place where all are welcome. It has its share of well-regarded Denver restaurants, including outposts of Comida, the Denver Biscuit Company and Rosenberg’s Bagels, and it has Annette — an eatery nominated for two James Beard Awards and named by Bon Appetit as one of the 50 best new restaurants in America. But it also boasts a nail salon, a kids’ gymnastics studio, a karate school, a dentist’s office, a healthy slate of cultural activities, and two acres dedicated to urban farming.

“We spent a lot of time thinking about how to drive people here for as many reasons as possible,” Shaker says. “If you have a thousand-square-foot spot, you can either have an office with 10 people working out of it, or you can do a kickboxing studio where they do six classes a day with 16 people each — that’s 100 people touching this place. Very rarely do you come in for one thing and not do something else. You figure out what works for your neighborhood and your community.”

Stanley is bordered on two sides by Denver’s Stapleton neighborhood and on the other two by northwest Aurora, so Shaker knew his concept had a wide demographic to serve. During construction, he took a different route to work each day to get some perspective on how the building could welcome its neighbors. And he made it a priority to get to know as many residents in the surrounding area as he could.

“These are drastically different communities that historically have not engaged with each other,” he says. “How do you bridge something between those that works for all four sides? It was really just getting to know people and asking questions: How can this project be valuable to you? What’s important to you? The more you investigate, things sort of come to the top.”

A store is a place people go to buy things. Stanley Marketplace is where people go to live: to eat, drink, work, play, learn, grow, gather, and explore, to see friends and make new ones.

Stanley isn’t an ordinary collection of businesses, but then Shaker isn’t an ordinary businessman. A social worker with a background in nonprofits — including Paul Newman’s Hole in the Wall Gang Camps serving kids with serious illnesses — he came to the executive MBA (EMBA) program at DU’s Daniels College of Business in 2009 with an eye toward helping other nonprofits succeed. As part of a social capital project in the EMBA program, Shaker and three other classmates adopted the Worldwide Fistula Fund (WFF), an organization that works with women in Africa to prevent the childbirth-related tissue damage.

The leader of the organization “had a million dollars in donations but no idea how to run an organization. No website,” Shaker says. “It was a perfect project for us. We built a website, we put operational procedures and protocols in there — we basically built an organization for them.”

Nine months later, after the WFF asked him to take over as CEO, Shaker made his first trip to Niger. The group wanted to build a surgical center to address the fistula problem, but Shaker soon learned it wouldn’t be as simple as that. It was his first lesson in working with communities to address their real needs.

“I went back to the board and said, ‘We have to stop thinking about building a hospital. We have to understand how to get things done in this complicated environment,’” he says. “Niger is the poorest country in the world; we’re in one of the poorest areas of Niger, and there are so many complicated elements there. I said, ‘Let’s start fresh. Let’s talk about how we make this work collaboratively.’ We met with tribal chiefs, with missionary folks, with government officials. At first the project was just going to be a surgical center, and by the time we were done with our planning it became this really robust prevention program. We developed a social reintegration program where we built these hostels for women to stay after surgery and develop entrepreneurial skills so they can go back and earn a living on their own.”

We believe in making connections: between neighborhoods and generations and strangers and friends. And we do that by taking down fences and building bridges, figuratively and literally.

‘A community of neighborhood spots’

Shaker stayed on with WFF for five years, then returned to Denver and began planning his next move. He teamed with fellow EMBA alumna Megan VonWald (who also was involved with the WFF project) and another neighbor, Lorin Ting, to build a beer hall where he and his neighbors in the Stapleton neighborhood could go to socialize over a pint or two. The group started searching for sites but came up empty-handed. When the city of Aurora heard they were having trouble finding a location, officials took them to the old Stanley Aviation building, a 140,000-square-foot site near Johnson and Wales University and the Anschutz Medical Campus.

“Our first reaction was, ‘This will be the biggest beer hall in the history of mankind,’” Shaker says with a laugh. “But then we started getting random interest from businesses, saying, ‘Hey, I heard you were looking at Stanley. If you get it, can I have 5,000 square feet to do a yoga studio? Three-thousand square feet to do a restaurant?’ We stepped back and looked at our original concept of a neighborhood gathering spot and thought, ‘What if we put a bunch of them together and make it a community of neighborhood spots?’”

The plan fit perfectly with Aurora’s urban-renewal efforts, and the project was soon under way, despite a few funding hiccups.

“Nobody thought it made sense,” Shaker says. “It had environmental issues, we were in a ZIP code that didn’t make sense for what we were trying to do, there was no anchor — no Target, no Costco — and there were access problems. We would eventually go into banks and say, ‘Here are the five things you’re going to hate about our project. Let’s talk about them right now.’ We’d lead with it and explain what we were doing and mitigate each of them.”

The funding eventually came — $35 million in total — and planning and construction began in 2014. Shaker had plenty of input from the DU community —s everal of the businesses in the complex are owned by alumni, and a handful of Daniels faculty members offered their expertise as well.

“Some of [the faculty members] thought we were crazy, but they would come and walk the site with us and tell us what to do, what not to do. It was a real sense of community,” Shaker says. “This wouldn’t have happened without DU. It’s not an indirect connection. I’m really grateful for it.”

When it opened in 2016, Stanley had 50 independent local businesses on board, lured by the location and the strong lineup of operators, as well as by Shaker’s unique vision for the place. Early in the planning process he commissioned the Stanifesto, a bold statement about what Stanley was and what it stood for: sustainability, creativity, collaboration, community.

“The Stanifesto is our North Star,” Shaker says. “And our business owners believe in that, legitimately. They believe in being part of something special. We would make [potential Stanley business owners] read it before we walked through the property. It’s attached to the lease. We want to be clear and transparent. When you walk in the front entryway, it’s there on the wall. That’s our accountability.”

The result is a market-place with special appeal both for customers—who increasingly come from all over the city to hang out at Stanley—and for businesses, whose proprietors appreciate the synergy created when a variety of retailers share the same space and the same mentality.

“From a business-owner perspective, it’s great,” says alumnus Andre Janusz (MBA ’05), owner of Logan House Coffee in Stanley. “We have great destinations like Annette, Rosenberg’s, the Biscuit Company — there are a lot of draws to the market, and that makes it really great for us. We can focus on coffee and focus on the things that we’re good at, and people who are coming to brunch at Denver Biscuit and are waiting for a table can come over and experience us and have a latte with us. I didn’t necessarily have to draw them in on my own. The market has its own momentum.”

Jason Batchelor, deputy city manager of Aurora, feels the same way about Stanley, which he points to as one of a handful of projects that are helping to transform the city’s image.

“We’ve got the Anschutz campus, we’ve got [the new Gaylord Rockies hotel near DIA], we’ve got these wonderful crown jewels, and we include the Stanley Marketplace as one of those,” he says. “I think it really has helped. I think people see Aurora in a new light.”

From the beginning, Shaker aimed to make Stanley a true gathering spot and community resource. He was inspired by African marketplaces, which serve as cultural hubs as well as sites for commerce. With that lively mix in mind, the marketplace hosts art festivals, concerts, book signings, pop-up libraries and more.

“I spent five years in West Africa, and you would go to the market and you would get stuff there, but it was more [that you] were pulled there because you felt comfortable there,” says Shaker, who is now bringing his expertise to new food hall projects in Golden and on Broadway in downtown Denver. “You would see people you knew in the community, and you would get different food from different spots — I loved the feeling you had when you’re in an African market.”

We are locally inspired and community desired. We asked ourselves what would make the best marketplace in the universe. Then we asked our neighbors. And then we built it.