Matt Sauve was bored. Simple as that.

As the snow piled up outside his loft off University Boulevard, the sophomore needed a way to entertain his friends. Within the next two hours, he would produce something that would go on to grace game rooms across the globe.

“I think I made something new that hadn’t really existed before,” says Sauve (BM ’14), a graduate of the Lamont School of Music and today a DJ based in Los Angeles. “I knew there was a space for something, a game that would bring people together where they could talk about topics that were very relevant at the time and fresh and no one really talked about.”

Sauve and his friends had such a good time, they started bringing the cards to bars and other parties across campus. Soon, the opera student realized he had a golden opportunity to put his marketing minor to good use.

“People loved it, played it; they wanted a copy,” Sauve says. “Eventually some copies got to other schools and people loved it, and that’s when the demand just got so big. And I was like, ‘wait, I might actually have something here.’“

Today, Sauve estimates, there are around 10,000 copies of his creation circulating in 10 countries. LGBT-centric Meetup groups and social media stars have all played along, picking a rainbow-colored card from the deck and reveling in whatever hilarity comes next.

The rules are simple. A player draws a card in one of six categories and follows the instructions. Each prompt is meant to deliver a laugh, whether through a comical story (like your first same-sex kiss) or an outlandish action (i.e. twerking for 10 seconds).

“It can seem slightly taboo, something you don’t necessarily play with your mother, and I think that appeals to a lot of people, but it’s done in a lighthearted way,” Sauve says. “[These days,] everybody gets locked to the [cell phone] screen. You put this down on the table, people end up laughing and talking for hours and hours, and they forget about their problems.”

At the heart of The Gayme, though, are the niche experiences, lighthearted moments and struggles those in the LGBT community often share. Sauve, who came out at age 14, is proud when he hears his creation is a safe and comfortable icebreaker for people who are more timid on the subject of sexual orientation. 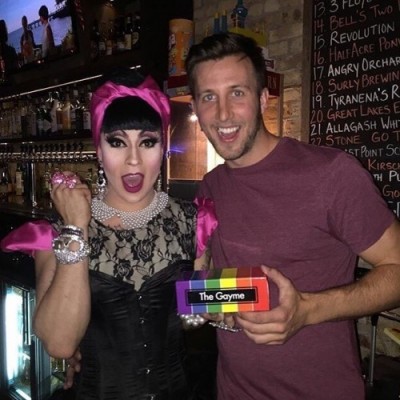 When DU partners with the greater community at the upcoming Denver PrideFest, Sauve will be there too, selling copies of The Gayme. As a DJ, Sauve is still wedging his way into the music industry, but he has no intention of deserting his most successful and most surprising venture.

“I’ve learned to believe my intuitions,” he says. “I don’t think people realize that if you really do put effort into something and put your mind to it and all that, it really does produce something valuable to the world.”