Tyesha Lowery has found happiness on the football field, despite an injury-plagued past

The knees don’t bend like they used to. The aches and pains are pretty much a constant now.

Still, Tyesha Lowery’s gold-cleated feet dance nimbly around the cones on the grass. The way they used to on the basketball court.

“They call me Smooth now,” says Lowery (BSBA ’06, MS ’07), a quarterback and wide receiver on the Mile High Blaze women’s football team. Then she laughs. “I wouldn’t say I was so smooth freshman year [of college].”

Back then, Lowery was just a kid from Arlington, Texas, who grew up in a Boys and Girls Club. A good athlete and eventually a well-recruited point guard who, she recalls, thought she knew everything. That is until she came to the University of Denver where “they showed me I didn’t.” 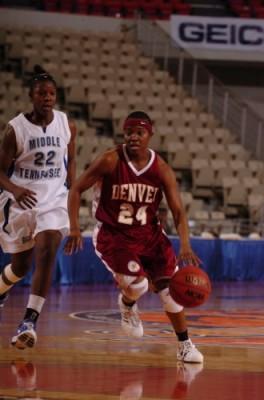 Ultimately, she would learn enough to become one of the best defenders and playmakers in program history. In her 74 starts, she places high on the all-time leaderboard in assists (11th) and steals (7th). But it’s the numbers that don’t make the stat sheet that stand out.

Six years with the program.

“I was devastated at first. I went a little crazy in my dorm room,” Lowery says, remembering the diagnoses. “[But] I’m a fighter. I don’t let things keep me down. Everything happens for a reason, and I’m where I'm supposed to be.”

These days, that’s — unexpectedly — on the football field, in the semi-pro, full-contact Women’s Football Alliance. She captains a team that is coming off an undefeated regular season and fell just short of playing for a national championship.

Life without her “new love” would be impossible now, Lowery confesses. Ever since a friend took her along to an informational team meeting, she’s been hooked.

She didn’t realize how much she missed being on a team, developing relationships with women she considers family. On and off the field, it reminded her of basketball.

“Of course it’s more dangerous,” she says with a laugh. “There’s more contact. [But] as a quarterback, I felt like a point guard still. You have to know everybody’s responsibilities. You have to trust your teammates so you can make plays. You have coaches telling you what to do. You have to train. It felt the same, it’s just a different sport.”

Yet it’s given her the same satisfaction she felt on the basketball court for all those years. And it’s helped her see how thankful she is for the people who made her athletic dreams a reality. She now coaches youth football, in part to show her gratitude.

“It makes me realize how important it is now for kids who were just like me who have the opportunity to possibly get a scholarship,” Lowery says. “If [the Boys and Girls Club and my coaches] weren’t there, then I would have never come to DU.”

And had she never come to DU, had she not torn her ACL? Well, she’s not sure what her life would be.

“I got two degrees out of it that are helping me now,” says Lowery, whose studies in statistics and database administration prepared her for her work in network security. “When people look at my degrees they say, ‘Wow, she can do anything.’” 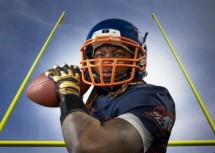 When the 5'6"quarterback throws a perfect spiral downfield or uses her natural quickness to elude a defender, she still hears that praise.

Lowery just never thought she’d be hearing it at age 34. And as a football player.

“Yeah, of all things, right?” she chuckles. “With three ACL tears.”

But that’s the way it’s always been. If something gets in her way, Smooth gives it her patented stiff arm.

“I find ways to come back better, stronger, smarter,” she says. “I’ve just learned to deal with adversity.”