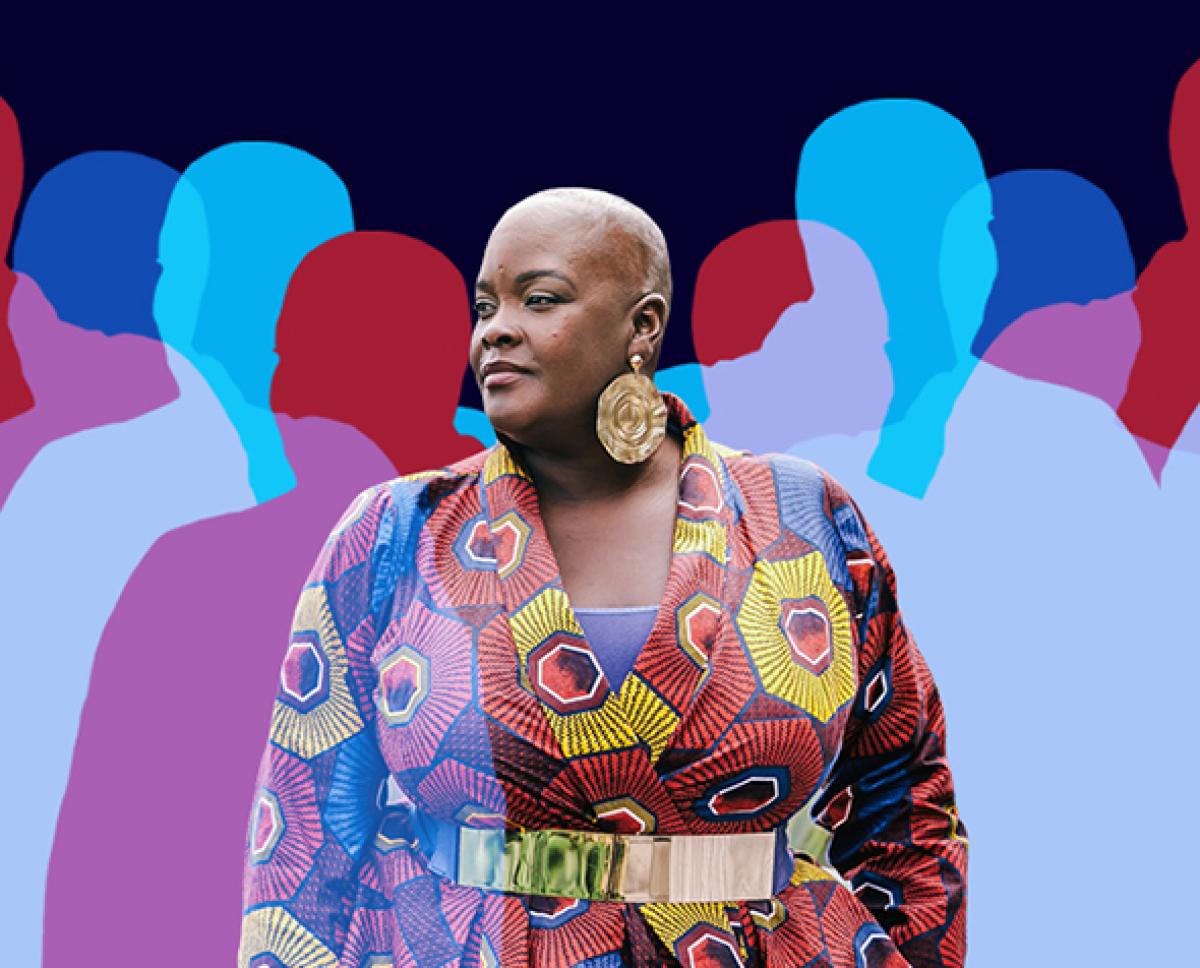 From her regal throne front and center in her New Zealand bedroom, Sonya Renee Taylor sat poised to energize a virtual audience through radical self-love.

The workshop, founded in 2016, brings campus and community together for timely – and sometimes tough – discussions and workshops.

“We bring folks just like Sonya to come and ignite us with the possibilities on how to create a more humane and just world,” says Amanda Moore McBride, dean of GSSW.

For Taylor, a more humane world is synonymous with transformative love. Through the lens of radical self-love, intersectionality and social justice, she works to disrupt systems of inequity.

“The body is not an apology,” Taylor says.

She first uttered those words years earlier in a conversation with a friend, who had confided in her about an unintended pregnancy.

Because of it, she admitted, “I didn’t feel entitled to ask this person to use a condom.”

Taylor didn’t respond but felt extreme empathy wash over her.

“Your body is not an apology,” she blurted.

The words didn’t come to her. The words came through her.

So she wrote them down. Stanza by stanza, she crafted a poem. The poet had done it countless times, but this was different. Her poem, “The Body is not an Apology,” grew into an online community, book and body liberation movement.

Erin Harrop, associate professor of sociology at GSSW and moderator of the event, is part of the movement.

Harrop, who uses they/them pronouns, met Taylor in 2015 at their first body liberation conference. At the time, the first-year doctoral student had been researching substance abuse. But their real passion was a personal one. They wanted to pursue research surrounding weight stigma, eating disorders and body liberation. Still, questions haunted them.

“Would there be a place for me in the academy?”

Inspired by Taylor’s words, Harrop approached her. Too shy to ask for a picture, they asked Taylor to sign a book instead.

Those words set in motion a lifelong commitment to radical thinking, which led Harrop to change their dissertation focus later that year from substance abuse to eating disorders.

“Like Sonya, we all have a body story. From birth to death, we carry our bodies and their stories with us,” Harrop says. “Having found an academic home at the University of Denver, a part of me feels as if I’ve come full circle. To be here as a faculty member doing body liberation work and welcoming Sonya Renee Taylor.”

Taylor’s work hinges on a deep understanding of the power of language. Referencing its destructive power, she spoke out against the anti-trans directive from Texas Gov. Greg Abbott.

On Feb. 22, Abbott sent a letter to the state’s Department of Family and Protective Services, ordering people to report parents for child abuse if they let their transgender children receive gender-affirming medical care.

Through words, she painted a picture of what she calls the ladder of bodily hierarchy. Atop the ladder sits the ideal body – one with the most access to society. While its impacts are real, the ladder is made up. And that’s where her work begins – a divestment of the illusion and an enhancement of the belief that the entire world and its people are interdependent.

Then she stunned the audience.

“I am Greg Abbott,” Taylor says. “He is not my other. He is a manifestation of the part of me that still holds some value in the ladder.”

Listeners, who had been bombarding the Zoom chat with messages, paused.

“If Greg Abbott is me, cutting him out doesn’t save the millions of people who are going to be impacted by the way in which Greg Abbott moves through the world. It doesn’t honor the piece that is about interdependence, which means I have to care.”

Choosing to care, she says, is a form of self-love.

“You are the world. The world looks like you and what you believe about yourself. As we transform that, we collectively weave together the possibility for a new kind of world.”

The next GSSW Catalyst Series for Social Justice will feature Robin Wall Kimmerer on Tuesday, April 19 from 12-1 p.m. MST. Kimmerer is the author of Braiding Sweetgrass, an inspiring collection of essays about the natural world that weaves together Indigenous wisdom, plant science and personal narrative. Register here.