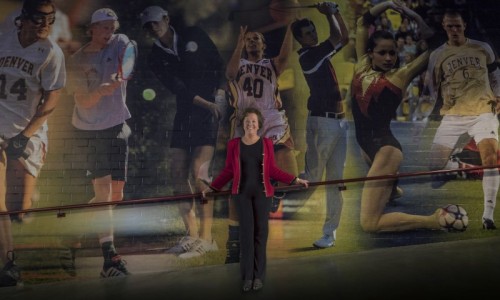 Peg Bradley-Doppes, vice chancellor for athletics and recreation and RC operations at the University of Denver, was selected as the recipient of the DI-AAA ADA 2017 Builders’ Award.

“It is an incredible honor to receive this award from an organization I admire so much. I have been blessed with mentors and colleagues who have shown me the importance of giving back and being a part of a team,” said Bradley-Doppes. “To them I owe a great deal of gratitude. The awards and accolades I receive are in large part influenced by people I have been fortunate to work with in my career. I am proud to be a part of the Division I-AAA ADA and it is with sincere gratitude that I thank the membership for this recognition.”

The award will be presented during the Division I-AAA ADA Membership and Awards Breakfast Meeting sponsored by ARMS Software, LLC, at the 2017 NACDA Convention in Orlando, Florida on Monday, June 12. The Builders’ Award is bestowed upon an individual who, for a minimum of five (5) years as an active I-AAA director of athletics has contributed to the enhancement of the Association in such a manner as to bring honor to themselves, his or her institution(s), and the profession as a whole.

“Peg has had many accomplishments throughout her distinguished career in intercollegiate athletics. She has guided the Denver Pioneers to numerous athletics accolades since becoming the University’s director of athletics in 2005,” stated Lynne Robinson, chair of the Builders’ Award Committee and director of athletics at Mount St. Mary’s University. “In addition, Peg has served on numerous NCAA committees and has made significant contributions to the enhancement of the DI-AAA ADA, having served as an Officer and as a member of the Executive Committee. In recognition of Peg’s service to our Association, as well as her leadership and commitment to the University of Denver and our profession as a whole, we are proud to present her with the Builders’ Award.”

Bradley-Doppes was appointed to the helm of the Pioneers’ athletics department in 2005, after serving in the same position at UNC-Wilmington from 1999-04. She has guided the Pioneers to eight NCAA championships, eight NCAA I-AAA Directors’ Cups, 87 conference titles, 62 coach of the year honors and numerous national rankings during her tenure.

Her distinguished career in intercollegiate athletics includes over two decades of NCAA committee service on the Management Council, Division I Women’s Basketball Committee, the Committee on Women’s Athletics, Division I Volleyball Committee, Peer Review Team, Olympic Sports Liaison Committee, and the prestigious NCAA Division I Leadership Council. She also previously served as NACDA Treasurer and was a member of the Executive Committee,. Bradley-Doppes was the DI-AAA ADA President during the 2013-14 season.