Bridging the Immigration Gap Through Food 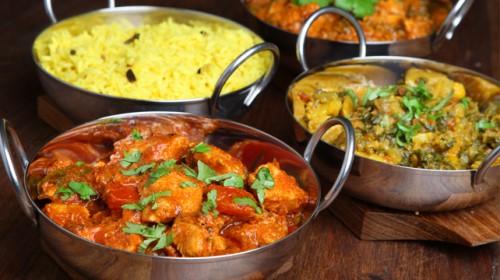 If there’s one thing that can bring strangers together, even those from different countries, it’s food. The power of food represents culture, tradition and unity, and to some degree, food helps us understand that immigrants and natives aren’t all that different.

A group of students from DU’s Department of Sociology and Criminology and Spanish Programrecently got a taste of how food and sharing can do just that.

Through funding provided by the Center for Community Engagement to advance Scholarship & Learning (CCESL), the students partnered with Casa de Paz, a Denver nonprofit that offers free housing, meals, visitation and transportation to individuals and families affected by immigrant detention. The organization also hosts guests who have recently been released from the Denver Contract Detention Facility in Aurora and need a place to stay as they make plans to make their way back home.

In spring 2016, visiting professor Katie Dingeman-Cerda — who worked closely with Casa de Paz founder Sarah Jackson to create the partnership — took a group of students from one of her classes (Crimmigration: The Criminalization of Immigration) to visit with formerly detained migrants, family members and those waiting on deportation orders who had been helped by Casa da Paz. It was an opportunity to humanize immigrants through the sharing of their personal stories and their love of food.

“When I moved to Denver, I wanted to get involved in immigrant rights issues,” said Dingeman-Cerda, who is now an assistant professor at California State University, Los Angeles. She also helped form the DU Immigrant Rights Coalition. “Sarah was the perfect community partner for this.”

During their visits, students collected the personal stories of the immigrants — also referred to as “chefs” — went grocery shopping with them and prepared meals that resonated most with the immigrants’ cultures and memories. James Beard Award-winning soul food author Adrian Miller helped the students produce the stories and recipes. In all, students met with five different immigrants and families.

“It’s tremendously helpful to put a face to this issue. When you share something personal, that’s easier to connect with,” said Jackson, who started Casa da Paz in 2012 following a trip to the U.S.-Mexico border. “Any time someone has the opportunity to meet a person affected by immigration, it becomes one of the best ways to have a transformative experience.”

Each immigrant’s story and its connection to food was unique and personal. 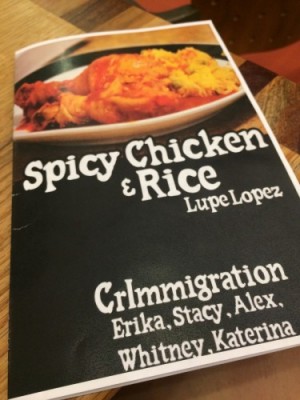 For instance, chef John Mensah’s dish of choice was “Favorite Fufu,” which reminded him of his time in Ghana; chef Jose Deras, who spent three years in detention for crimes it was later determined he did not commit, created a dish called “Costillitas de Puerco,” which brought back memories of a lost love; and chef Eric Canton, who reminisced about his family and childhood as a second-generation Chinese migrant in Mexico, helped prepare a dish appropriately called “Family Style Citrus BBQ Chicken and Vegetables.” He was also about to be deported, meaning he would have to leave behind his wife, who is a U.S. citizen, and their three children.

Finally, there was chef Lupe Lopez. Her “Spicy Chicken and Rice” dish was created in memory of her mother, who died of cancer in Mexico. Due to her own undocumented status, Lopez was unable to attend the funeral.

Hand in hand and side by side, these two groups, both from very different worlds, were talking together, cooking together and eating together. No longer were these just immigrants; they were people with names, faces and deep stories that reflected struggle and a longing to be accepted, even if only through food.

“If you are put in a situation where you’re talking, sharing and making food together, it becomes a great conversation starter,” Jackson said.

While the project had to be cut short when Dingeman-Cerda moved to California, Jackson says she is open to continuing the collaboration in the future. Zulema Lopez, a teaching professor in DU’s Department of Languages and Literatures, is planning to do just that. In addition to helping translate some of the stories and recipes for a future bilingual cookbook, she wants to make the project a component of service learning for her Spanish language class.

“We long for this type of food, which was handed down to us by our mothers and grandmothers. It brings back memories and helps define who we are; it’s something personal,” said Lopez, an immigrant from El Salvador. “Students love doing projects like this. This will be something they remember; it opens their minds and unites cultures.”

For now, Casa da Paz is continuing to work with Dingeman-Cerda from afar to create more stories and recipes from other immigrants across the country. Eventually, they hope to have 30 to 40 stories and recipes for the cookbook, which was the idea of Jackson and her mother. Proceeds from the cookbook will be used to help Casa de Paz continue the services it offers.