The spring 2020 edition of the University of Denver Magazine is out! This story originally published in the magazine. To view all the stories from the spring magazine, please visit magazine.du.edu. 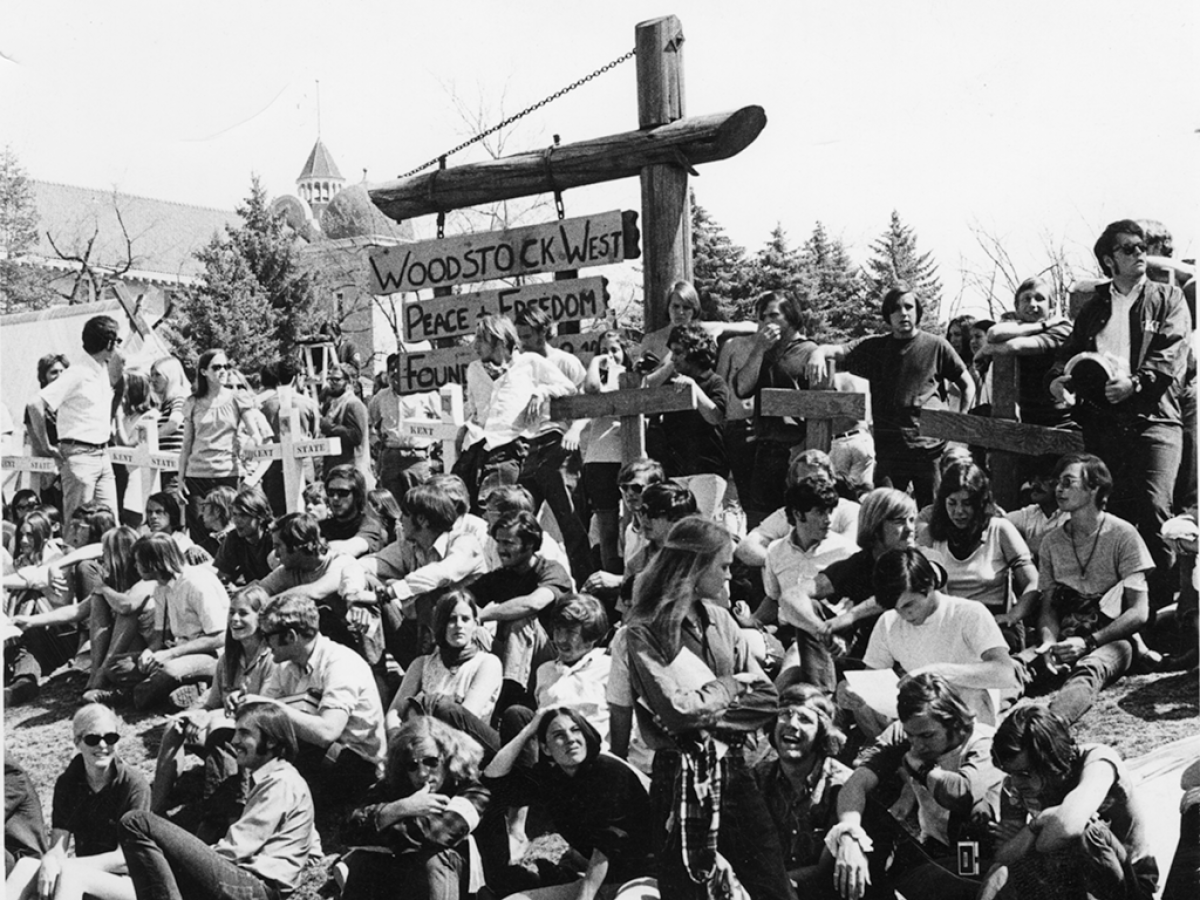 The times were volatile, and throughout the 1960s, many students at universities across the country—including DU—had found their voice and begun protesting: against the war, against poverty and racism, for civil rights, for women’s rights and students’ rights. At DU, much of the discontent was focused on the University’s Denver Research Institute, which developed weapons for the military.

“A lot of people say that we were the first generation that had the luxury to challenge and question,” says alumnus Jim Wagenlander (BA ’70). “I think young people do that anyhow, but we were a huge group because of the Baby Boom. That, and the prosperity in the country, I think, created an opportunity for young people to start challenging and questioning what society was. Not just to attack it, but to look at how it could be improved.” 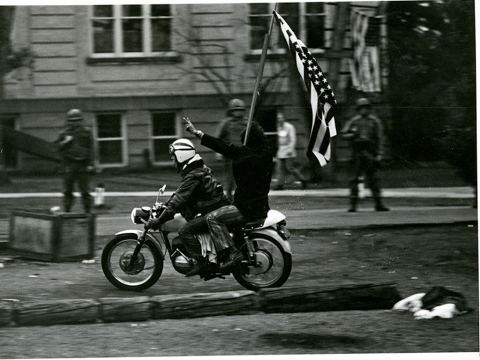 Then came May 1, 1970, the day American troops invaded Cambodia and expanded the scope of the Vietnam War. Protests erupted on college campuses across the country, including at DU, where students launched a three-day strike. Their demands included the immediate release of Bobby Seale and all other Black Panthers and political prisoners; immediate withdrawal of all U.S. troops from Southeast Asia and an end to all U.S. aggression; removal of ROTC from all campuses; and an end to all campus military research. The first day of the strike ended in a march on the office of Chancellor Maurice Mitchell.

A similar protest was taking place at Kent State University in Ohio, but its end would be far more tragic. Four students were killed and nine wounded by National Guardsmen on May 4. When word of the shootings reached DU, “it was like throwing fuel on the fire,” Wagenlander says. “Immediately, campuses all over the country were talking to each other, and there was talk of a national student strike.”

Mitchell called an all-campus convocation on Friday, May 8, to discuss current events and let students air their views, but the meeting did little to quell the dissension.

“He failed to connect with the students and maybe some of the faculty in the arena,” Wagenlander remembers. “As people went out, they were angry, and people were talking about burning something or destroying something, and other people said, ‘Let’s build instead of burning.’” 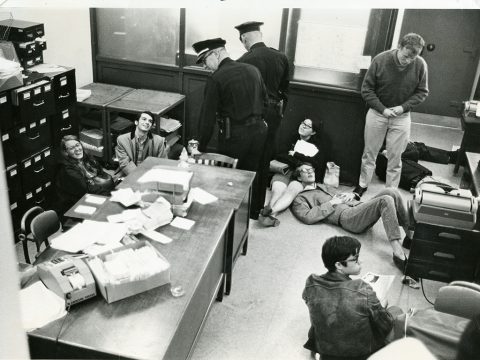 This was the moment that launched DU’s most iconic protest: Woodstock West. Some 300 students and faculty members constructed a temporary city comprised of tents, shacks, tepees and other structures that sprung up just south of Evans Avenue, in front of John Carnegie Hall. Dubbed “Woodstock West Peace and Freedom University,” it was an exercise in communal living, alternative education and bucking the system.

“The whole idea was to exchange ideas. It invited everybody in; we wanted to talk to anybody who wanted to talk,” says alumnus Charlie Claggett (BA ’70), who volunteered as a student marshal at Woodstock West. “From that standpoint, we thought it was pretty cool.”

Local rock bands played for the crowd, and a makeshift speakers’ stage was erected for people who wanted to share their political views. Faculty members led outdoor classes while others gathered in small groups around campfires, sharing a joint or a bottle of wine while they talked about what a better tomorrow might look like.

“We felt like we didn’t have any control over our futures or destinies, and this was something that gave us just a little bit of control,” Claggett says. “We could go on strike, shut the University down—it wasn’t just DU; it was universities everywhere. Students going on strike was kind of a national movement. We wanted people to know that we opposed the war because it didn’t make sense, and that the path to a better world was the path of talking and exchanging ideas and loving one another, rather than hating each other.”

Though the protest drew a large number of participants, many alumni say it’s important to remember that DU was a fairly conservative school at the time. Just as the country was divided over the war, the counterculture and larger political issues, so was the DU campus. For many, Woodstock West was less a utopian society than it was an eyesore, a distraction that required alternate routes to get to class.

“It was right there in the center of campus,” remembers alumnus Richard Wihera (BA ’73, PsyD ’82). “It was kind of impossible to get from one place to another without running into it. If you wanted to avoid it, you’d have to go a block or so outside your usual route. I came from white-bread middle America, and here I am a freshman, and this is pretty darn new to me.

“It was very disruptive, and in my perspective, there was more smoking dope and drinking going on than academic pursuits,” Wihera continues. “I’m not trying to say everybody was a dope-smoking hippie, but I sure got the impression there was more of that [going on at Woodstock West] than seminars on how to stop the war.”

A May 14, 1970, editorial in the Rocky Mountain News was just as skeptical, arguing that the protest “had no real objective except nuisance.” 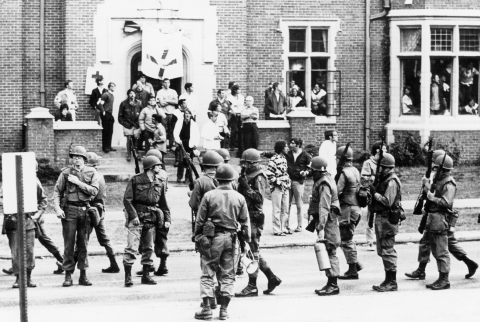 But for the protestors, Woodstock West was a serious endeavor that required commitment. When Mitchell—worried that outside agitators had infiltrated the camp—called in the Denver police to tear the structures down two days after they were first erected, Woodstock West residents followed the trucks to the dump, retrieved their tents and building materials, and promptly went about constructing Woodstock West II.

“We thought it was hilarious,” Claggett recalls.

The next day, as gawkers drove by on Evans Avenue to see the hippie commune, Colorado Gov. John Love visited the encampment, which was now larger than it had been before the teardown. He told students that while he was sympathetic to their cause, they needed to “work within the system” to create the changes they were demanding. In addition to their initial requests, protestors were now asking for a series of seminars devoted to the discussion of issues facing the nation; academic reform in the areas of social and political involvement; the establishment of “programs with a positive approach to the solutions of racism within the institution and the community at large”; and construction of an outdoor forum and a permanent Woodstock West residential area. 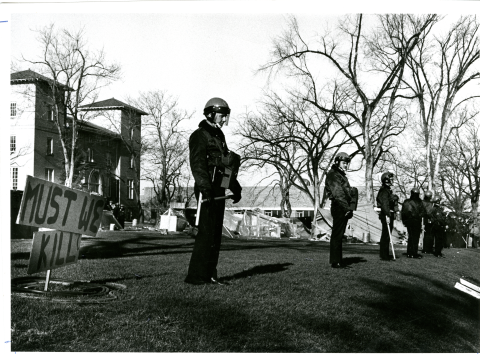 Unable or unwilling to concede on the permanent residential area, Mitchell contacted the governor later that night to say that he no longer had control of the situation on campus. Some 1,000 National Guardsmen—many of whom were current students—arrived on campus the next morning, with bayonets and live ammunition, to oversee the final destruction of Woodstock West.

“Coming literally face-to-face with other close fraternity brothers in the National Guard on the front line that were ordered to tear down the compound was as chilling as anything I have and ever will experience,” says Bruce Carroll (BSBA ’71). “But each of us knew the reason why we were there and respected each other’s choice.”

Woodstock West would not be rebuilt again. Some mourned its loss, while others were glad the disturbance was over and academic life could return to normal. Alumnus Donald Byrnes (BS ’70), who was a senior at the time, recalls being concerned that the protest would interfere with his ability to graduate on schedule.

At Commencement a few weeks later, about 60% of the senior class either wore armbands with peace insignias or chose not to wear caps and gowns. Chancellor Mitchell did not shake hands with the graduates or personally sign their diplomas, in an effort to avoid incidents.

“Something came alive for some members of this university community — some said that a real community came into being. It is surely possible. It is also regrettable that this had to be the mechanism,” Mitchell would later say in an interview that appeared in the Denver Post.

But many of those involved with Woodstock West speak of it fondly, even today, as a small part of the movement that eventually ended the war and went on to have a greater influence in politics and policy.

“It was a time when you started to think for yourself and realize you don’t have to fit into anyone else’s image of you,” says Susan (Foster) Gould (BA ’71). “It was good for us to see what we were capable of, and I think that demonstrations like this eventually stopped the war.”

Samantha Stewart contributed to this story

Kate Crowe, associate professor and curator of Special Collections and Archives, presents “Build, Not Burn: Woodstock West and the University of Denver,” a virtual discussion of Woodstock West, from 2–3 p.m. Tuesday,  May 5. The lecture will be 30-40 minutes, with 20-30 minutes for questions and discussion. A link to the Zoom event will be sent with your confirmation email upon registration.