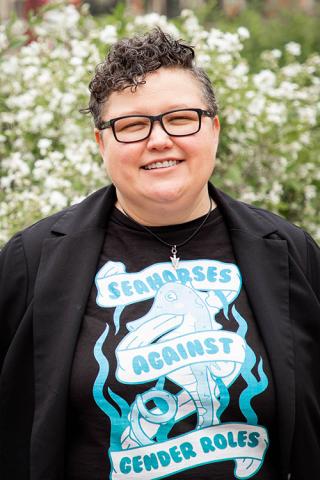 The University of Denver is committed to living our values of diversity and inclusion. We recognize that our community and institutional success is dependent on how well we engage and embrace the rich diversity of our faculty, staff, administrators, students and alumni. With that shared value in mind, throughout this academic year, we plan to publish a series of articles to celebrate cultural and ethnic heritage months. In partnership with Human Resources & Inclusive Community and the Staff of Color Association (SOCA), we will feature a staff or faculty member in recognition of each heritage month, along with an event to honor one another and learn about our unique differences.

When we meet via Zoom, Cody Ortiz-Oldham is wearing a shirt that reads “Seahorses against gender roles,” a nod to the ways that the underwater stallions defy human concepts of gender.

“There is gender and sexuality diversity in every plant species, in every animal species, in every race, in every country,” Ortiz-Oldham says. “Unfortunately, there are lots of places where folks have to hide it because of how it's still a global stigmatization and danger.”

So, Ortiz-Oldham has made it their mission to create a welcoming environment at the University of Denver and beyond. They started this work as a peer support staff member at Rainbow Alley, a Denver organization building community among LGBTQ+ youth. Then they studied to be an LGBTQ+ youth counselor, before landing at DU as assistant director of gender and sexuality at the University’s Cultural Center.

In celebration of Pride Month, Ortiz-Oldham joined the DU Newsroom to discuss their work, DU’s progress and the community-building power of music. The following conversation has been edited for length and clarity.

What made you want to work with students at this juncture in their life?

I came from a background of having a bunch of intersectional identities, so in addition to identifying as many letters of LGBTQ+, I also am Indigenous, Chicano, and I have both learning disabilities and physical disabilities, so all of those things met and made school challenging for me. Neither of my parents graduated high school, and so I come from a group of folks where education just wasn't accessible. For me, it's always been about creating educational equity, equality and access for students.

You’re now in the first full-time LGBTQ-serving position at the University. When you started in this role, what was your goal for the position and for the work you could do at DU? And what have you accomplished so far?

I think for me, it's really been creating this ever-evolving five-year plan to get our campus in alignment with national standards for LGBTQ+ support for institutions similar to ours. We are really working to meet millennials’ and Gen Z's experience of gender and sexuality as an intersectional identity and [figuring out] how to create experiences where folks can be fully integrated on campus.

I just completed my second full year here, and I think we're making a lot of headway. We still have a long way to go, but I do think we've really upped our resources, especially for our trans and gender-variant community. Some of the greatest strides have been made in creating inclusive housing in our new buildings. It’s really worth noting folks in the past who have done this work, like Jasmine Pulce and Thomas Walker. They created the foundation for this program to exist.

How has your background in social psychology factored into the way you approach your work?

One of the biggest reasons I went into counseling psychology is because as a youth, I had a really difficult time finding inclusive counselors who could understand the layers of what it meant to be a person of color, what it meant to be Indigenous, but then also trans and queer. My draw to psychology was wanting to understand myself, but also wanting to see what resources I could provide other folks.

Specifically, my degrees are in applied psychology with a specialization in diversity, equity and inclusion, and that is a rare cross-section. That really became my framework for wanting to help folks. I'm not a counselor at DU, but I think that psychology and sociology lens really inform how I work with folks.

I've really worked hard to try to create programming that's inclusive of the large spectrum of LGBTQ+ identities — different gender identities and gender expressions, different sexual orientations across the board. So not just gay and lesbian, but also bisexual, pansexual, asexual and folks who are questioning, and then other intersecting identities as well. It's really trying to be inclusive and realizing that having an LGBTQ+ identity is not a homogenized experience. We have folks who are athletes, folks who are video gamers, folks who love glitter and dance clubs, but then folks who are extremely introverted, and we are really trying to create programs where everybody is welcome. I wouldn't say we have achieved that just yet, but I think we're getting there. The goal is to start to bring them under this bigger campus-wide organizing umbrella of “DU Proud.” That's why on June 24, we are having our first #DUProud Fest.

Your identity as a member of the LGBTQ+ community is just one part of who you are as a person. Can you tell us a bit more about what makes you, you?

I often come off as very playful and a bit whimsical.  My office is always adorned with rainbows and silly things, but part of that actually comes from trauma. Growing up with LGBTQ+ identities when the world was not supportive, I had very, very few identity-affirming resources. It created a difficult lived experience. I was a street kid who had to self-support and who has gone through difficult experiences. That really shaped who I am in wanting to create an opening and welcoming atmosphere for every student I encounter.

Outside of your work at DU, you're a professional DJ and a drag show producer. How did you land those roles? And how do you bring them to DU?

It goes back to Rainbow Alley. In the early days, folks took on different aspects of running the center, and that's where I learned to DJ. The DJs also were the people who played the music for drag shows, and so over time I learned how to do the drag show booking and show creation. Also, that's just who my friends were.

When I think of myself in my zone, it really is DJing because it's the psychology of seeing people, wanting to create joy, wanting to build collectiveness. When I think about life, I always use [the saying] “remix your life.” It's a cliché saying for DJs, but I love it. It’s like, here's what we're given, but also what can we do with it?

The thing I do most often really is music, but then it's also community work and co-creating collective care. Honestly, my heart and soul have always been invested in wanting to leave places better than I found them. Even with our own struggles and challenges, we all have the power to care for one another and lift one another up — especially those who are the most vulnerable in our communities.

If folks are interested in LGBTQ+ resources or being added to the LGBTQ+ newsletter, email me at Cody.Ortiz-Oldham@du.edu.