For most students, the idea of learning and mastering one area of math and science might be challenging enough. However, for senior Celia Smits, it was all about absorbing as much as possible during her time at the University of Denver.

Smits is graduating this weekend with double majors in molecular biology and biochemistry, and minors in math and physics. Her areas of focus touch on four of the five academic departments in the Division of Natural Sciences and Mathematics.

“I just think they are all really interesting and important subjects,” Smits says. “I love math and physics, and that’s not something you really get while studying biology.”

Smits says her interest in these areas started while she was growing up in Fort Morgan, Colo. Both of her parents are veterinarians, and they allowed her to experiment a lot with microscopes. By the time she was in high school, she had developed a strong passion for science and math. 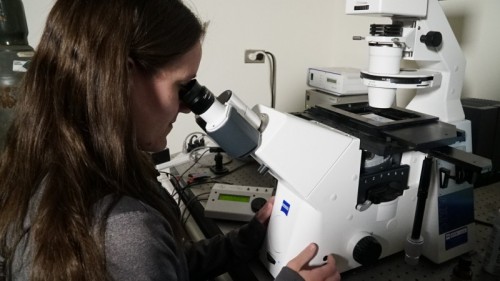 “I just fell in love with it and decided it wasn’t something I wanted to quit doing,” Smits says. “Taking classes and reading scientific literature, it’s really cool because it’s a story and a puzzle that you have to piece together, and I really like that aspect of research.”

Smits has been working in Associate Professor Todd Blankenship's lab researching fruit flies and studying how their cells change during development. In fruit flies, the mutation process happens rapidly, which can provide a glimpse into what occurs with human genes.

Next fall, Smits will pursue graduate studies in molecular biology at Princeton. She hopes to one day become a professor. It’s not the direction she initially planned, but it’s the passion she has discovered during her four years at DU.

“Follow what you are interested in and take advantage of every opportunity that you have,” Smits says. “College is a really great time to figure out what you are passionate about. So, follow that and don’t go based on what you had planned from the beginning.”