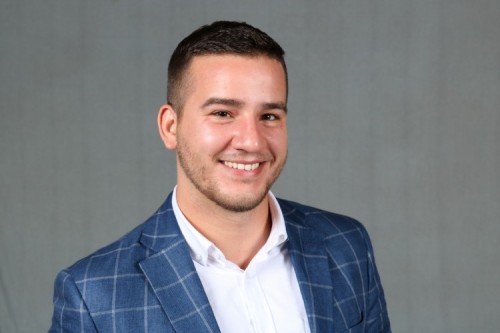 A 4 percent chance of anything is extremely low, but it’s still a chance. No one knows that better than Doug Booth (MS ’16), a department manager in DU’s Department of Political Science.

According to DKMS — a nonprofit organization that is dedicated to the fight against blood cancer and blood disorders — there is just a 4 percent chance that a person’s bone marrow will be a match to that of a complete stranger’s. The odds turned out to favor Booth and Chris Wilkinson — an Army repairman stationed in Tennessee. In 2015, Wilkinson, a married father of four, was diagnosed with myelodysplastic syndrome — a form of blood cancer — and was in need of a transplant.

Booth, 29, and Wilkinson, 27, had never met before. It was a chance encounter at a concert in 2014 in Colorado Springs that set everything in motion. On that night, Booth was attending an Andrew McMahon concert when he was asked by a worker from the Dear Jack Foundation if he would like to register as a bone marrow donor. The foundation, which was founded by McMahon, supports initiatives in the fight against adolescent and young adult cancer.

Reluctant due to his fear of needles, Booth went ahead and signed up, thinking there was little to no chance he’d be a match.

“At the time, I had a massive phobia of needles and never intended to sign up; [it] was laughable to most who know me because of that fear,” Booth said. “My whole thought process leading up to it centered on the idea that I’d have the potential to save someone’s life.”

In August of 2015, Booth received the unexpected phone call notifying him that his bone marrow was a match to a person in need of a transplant. He began the blood-work process, which was followed by a couple of months of silence from DKMS. It turned out that Wilkinson had decided to continue alternative treatment instead of doing the transplant, and DKMS informed Booth they would let him know if anything changed. It did.

“I thought that was the end of it. In January 2016, however, they called again,” Booth said. “They wanted to get the donation and wanted it to be sooner rather than later. We agreed upon the second week in March, and I donated March 14.”

Booth’s father flew out to Colorado to support him during the operation. Booth admits that the procedure was painful but nothing extreme or unbearable, and it was nothing compared to the pain and treatment that Wilkinson had to go through.

While Booth knew he was donating to someone who needed it, that was the extent of the information he had about Wilkinson. It wasn’t until a few weeks later that Booth learned Wilkinson had successfully received the transplant. The two began communicating shortly thereafter, keeping in touch as much as possible.

On Dec. 11, Booth and Wilkinson finally met in person during an event in Denver hosted by the Dear Jack Foundation. Meeting Wilkinson, who is now in remission, and his wife, Cassandra, only confirmed Booth’s feelings about the process and his decision to donate.

“It’s truly an amazing feeling. After we started communicating, I realized that I not only saved his life but also gave his wife and four kids a chance to spend the rest of their lives together,” Booth says. “His kids get to grow up knowing who their dad is — not just the memories from others. I’d do it all over again if needed.”

Booth is working with the Dear Jack Foundation to do a bone marrow drive on campus in January.