Creativity and Persistence: Natasha Dobrinen on Being a Mathematician

Several hundred mathematicians convened at the University of Denver on October 8-9 for the American Mathematical Society's regional meeting. This was the first time that DU hosted the event, which featured sessions on everything from algebraic logic to noncommutative geometry. We caught up with Natasha Dobrinen from the Department of Mathematics to talk about what it means to be a mathematician and carry out research in math. 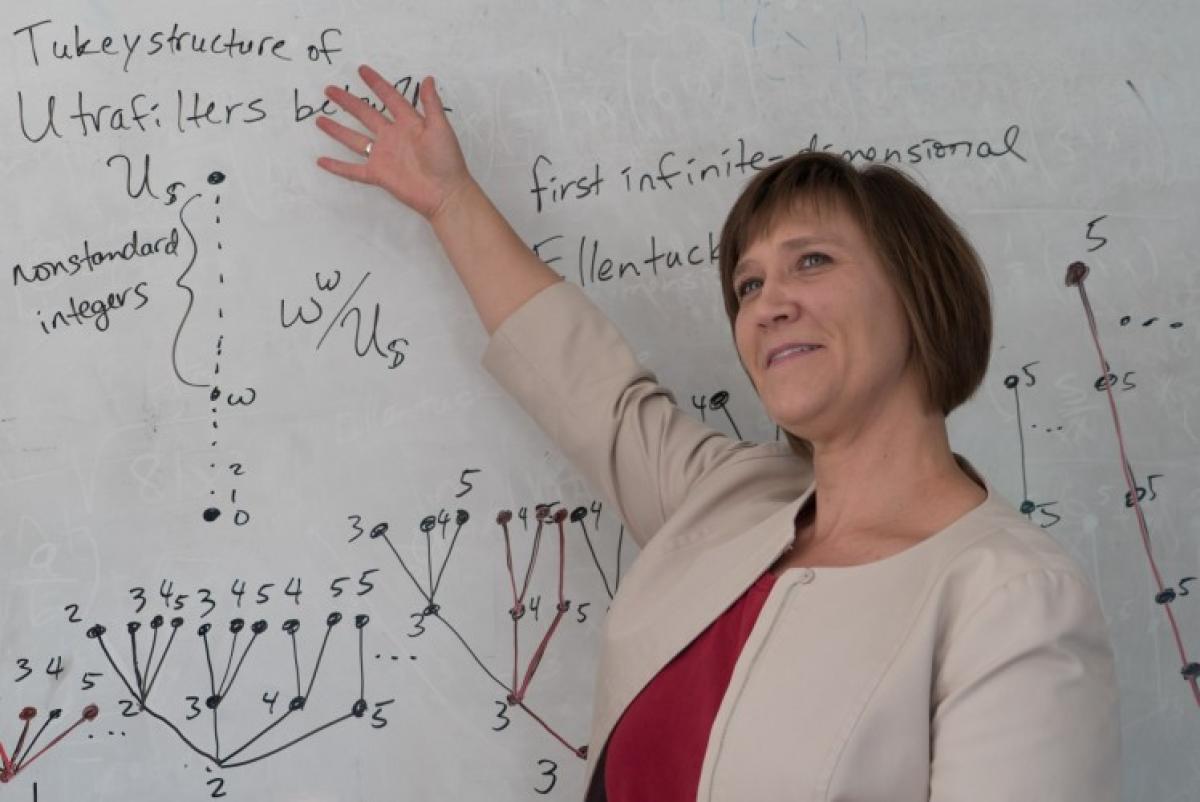 You consider yourself a pure mathematician. What exactly does that mean?

A pure mathematician is someone interested in the theory of mathematics, as opposed to mathematicians motivated by problems in science or industry. It's about answering questions that haven’t been answered yet, motivated from within mathematics. Or like a musician composing for the sake of making new music.

What are some of the misconceptions that people might have about working as a mathematician?

The main thing that people don't realize is how creative it is. They think, "Oh, you must be really good with numbers!" But mathematics isn't dry or boring at all, and it's not about number crunching or solving equations. It's about structures and relations between structures. It's very creative and rewarding.

You recently won a three-year grant from the National Science Foundation for doing abstract theory research. Tell us a bit about this.

It's my second grant on the subject, which involves three fields of mathematics: Ramsey theory, set theory, and Tukey order. Ramsey theory focuses on the conditions under which order must appear. Set theory deals with the formal properties of sets as units without regard to the nature of their individual constituents. Tukey order is a means of comparing relative strengths of different structures. I'm working to strengthen and find more connections between these areas of mathematics, leading to new theory and a better understanding of mathematical structures.

When it comes to conducting research in math, obviously there are no laboratories or field stations as there are in the natural sciences. How exactly does one carry out math research?

It depends on whom you ask. For me, it's very creative. It means first reading other mathematicians' papers and books, then sitting down with a pencil and paper and thinking about how to answer mathematical questions. This might mean proving new theorems, inventing new techniques, or building mathematical structures. Sometimes there is sufficient information to tweak something and make a theorem, but other times you're in left field without much to go on. You have to build a new theory. It's often a slow plod, but sometimes things just come together. For me, taking a walk is a good way to process things, as I find a change of scenery helpful. You never know when you're going to solve something. When it happens, sometimes I run around my house with my arms up in a victory lap.

You sketch ideas out with a pencil and paper. In our digital world, this might come as a surprise to many.

The only time that I use my computer is to write papers, though other mathematicians may use computers more. Plus, I study the infinite, which I can't use a computer for anyway.

What sort of advice do you have for aspiring mathematicians?

It takes a lot of persistence. And you have to really love it. When you're working on something for a long time and it doesn’t work, it can get depressing. You have to remember how much you love it. Because if you love it, you're going to work hard.

Speaking of future mathematicians, there's talk about how artificial intelligence could transform the way math is done. What do you think – will human mathematicians be relegated to simply running machines someday?

I'm not sold on the idea. I think that people have capabilities that computers will never have. We're vastly different – we have bodies, souls, free will. We're not as constrained in thinking abstractly and creatively as computers are. I have no fear of being replaced by a computer in 20 years.