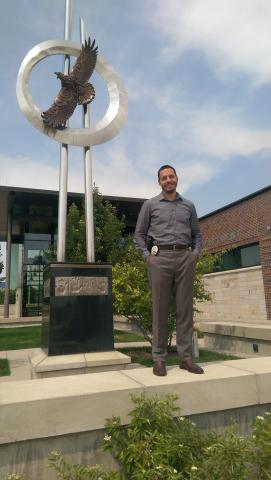 The job of a police officer, as Tyler Herman describes it, sounds simple enough: Get people what they need.

Increasingly, the detective is finding, what they need is mental health support. Last year, for example, his Parker Police Department (PPD) received 216 calls — more than four a week — reporting suicidal subjects, a figure that does not include requests for simple welfare checks.

“We as a department are coming into contact with these folks more and more as the population grows,” says Herman, who will collect his professional MBA from the Daniels College of Business in December. “And then, when the population density increases, we start to have a higher need to address these situations.”

Thanks in large part to Herman, the PPD is leading the way in Colorado as state law enforcement agencies work to better serve their communities.

Consider that nearly every officer in the department is trained in either crisis intervention or mental health first aid. It’s one pillar of the One Mind Pledge, a challenge sponsored by the International Association of Chiefs of Police. PPD is one of only two agencies in the state that has fulfilled the pledge to partner with a community mental health organization and undergo hours of specialized training.

Achieving this elite status has been Herman’s mission since 2013. As a two-year PPD veteran and financial crimes detective, Herman was asked if he wanted the additional responsibility of leading the Crisis Intervention Teams (CIT) program. Although he initially wasn’t sure of his decision to accept, a 45-hour training course reinforced the importance of his new line of work.

“My own understanding of mental illness was shattered,” he says. “You look at those suffering from schizophrenia and bipolar — if you’re not raised around it, you don’t really understand it. And [you won’t] until you challenge your own notion of its existence and you go meet with these folks. … Then I realized, on the street we’re coming into contact with some very sick folks. We need to not only listen to them but know how to get them the help that they need, recognizing that the law enforcement is not intended [to solve] the world’s problems, but we are problem solvers.”

Making a difference in the lives of others has long characterized Herman’s career. At 13, after seeing a commercial on TV, he promised he would join the Marines. At age 17, he followed through.

After two tours as an infantry machine gunner in Afghanistan and Iraq, Herman returned home to Colorado and found satisfaction in law enforcement — a way to make a positive impact with the skills acquired in the military. A Colorado State Trooper at first, Herman eventually took a job in his hometown of Parker, where his colleagues pushed him to pick up a bachelor’s degree in organizational leadership. Enrollment in the Daniels pMBA program followed. 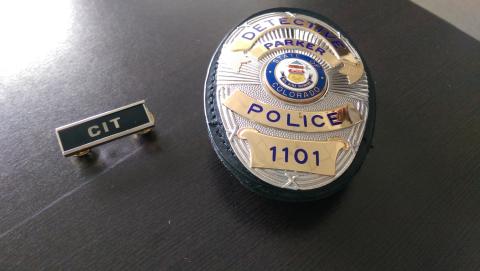 “The program over these 24 months forces you to engage in topics that you’re learning or know very little about,” he says. “Really the varying backgrounds from students and staff alike have been by far the most beneficial piece of this whole thing. It’s [experiencing] the material with the cohort that has really driven it home.”

His studies have helped him drill down on business topics that will come in handy as he investigates financial crimes, but he has also benefited from the Graduate School of Professional Psychology’s initiative to “Redefine Mental Health.”

“We need to normalize mental illness and get it away from being something that’s known as taboo,” Herman says. “Let’s accept it. Let’s help them.”

At the PPD, officers’ uniforms now sport a slender black bar adorned in gold with the letters “CIT,” representing the completion of rigorous mental health training. The black bar can signal many things — the understanding between a cop and a citizen, steady progress in the fight to destigmatize mental health issues, or maybe a show of commitment to the community.

But to Tyler Herman, it’s also much simpler than that.

“When people need help, they call us, and we show up,” he says. “What it boils down to is I want to make sure everyone we come in contact with is getting what they need.”