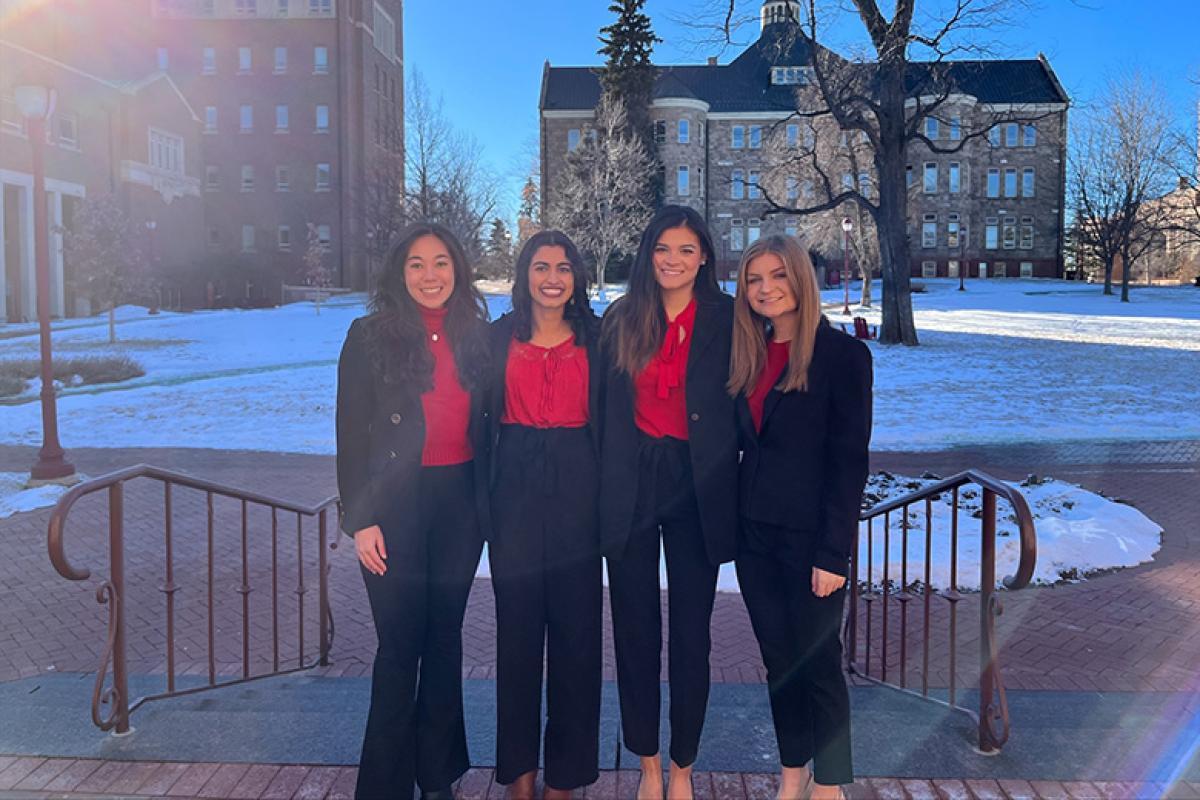 A team from the University of Denver’s Daniels College of Business had already bested the likes of Georgetown, Penn State and UC Berkeley to reach the finals of the National Diversity Case Competition—an accomplishment in its own right.

But now, as the judges revealed the winners—dramatically, one by one, in reverse order—Amina Penn’s heart fluttered: “Once they made it to the top three it was like, ‘Oh my goodness. We’re up there.’”

“I jumped out of my chair,” said Jeffrey Brothers, a teaching assistant professor who served as faculty coach to the Daniels team. “When I heard [who took] second place, I knew we had won. We were the only ones left.”

“I think it was a feeling of shock and pride that, as the University of Denver team, we were able to accomplish something on this massive of a scale,” Winn said.

The case competition, sponsored by Indiana University's Kelley School of Business, featured 35 teams from the country’s top business schools. Students are presented with a real-life issue to solve for a real-world company.

This year, the competition put student teams to work for 3M. Their charge: find a way to increase the adoption of robotics and automation for minority-owned small businesses while also advancing equity in science, technology, engineering and mathematics (STEM). Specifically, teams were told to focus on 3M’s Abrasive Systems Division, which specializes in robotic grinding and polishing technologies.

“None of us went into the competition knowing anything about robotics automation and [we knew] absolutely nothing about abrasives,” Sautter said. “So I would say a good chunk of what we were doing was figuring out exactly what that was. There were so many different parts that four girls from Denver, Colorado had no idea about.”

What they did have an understanding of was Colorado’s ski industry, which is notably white- and male-dominated. As part of their extensive research, the team zeroed in on a Telluride company that makes skis.

“We took it to a very local level and I think that resonated with the judges,” Winn said. “They appreciated us taking this big, conceptual idea and actually putting out something tangible.”

For months, the students pored over documents, conducted interviews and combed financial statements to create their solution. Their proposed initiative, which they called “3Mpower,” employed a team of small business liaisons to make connections with new businesses and explain abrasive technology.

Because minority-owned businesses often struggle with funding, the Daniels team also encouraged the liaisons to connect their prospective clients with grant opportunities. Meanwhile, to highlight 3M’s commitment to the cause, the students suggested amending the company’s website, mission, vision statement, and marketing materials to highlight minority profiles.

“That diversity [aspect] was extremely fascinating,” Penn said. “To be able to compete on a topic that’s more prevalent in our society and bring more awareness to that was a great opportunity—to take on different perspectives and know what a company needs to hit those goals.”

The team’s final presentations were part of a virtual, weekend-long event that also featured workshops, lectures and opportunities for networking with a litany of big-name corporate sponsors. For Winn, those offerings alone make case competitions an invaluable experience.

“Even if you don’t end up winning competitions, they’re still incredible ways to meet employers, incredible ways to work with top-notch students, and [incredible ways] to perfect your public speaking, data analysis, and presentation skills that you’re just not going to get in the classroom,” she said.

Penn agrees: “It’s a real-world experience without committing to an internship,” she says. “It’s a taste of real life before you commit yourself to the business world post-graduation.”