Katie Steefel has had a busy and fulfilling three years as a student at the Sturm College of Law. She’s led the Denver Law Review’s annual symposium, developed The Pledge for Public Good with her fellow students and established a new student collective, the Education Policy and Advocacy Group. Thanks to these achievements and others, Steefel was named a Law Student of the Year by National Jurist magazine. 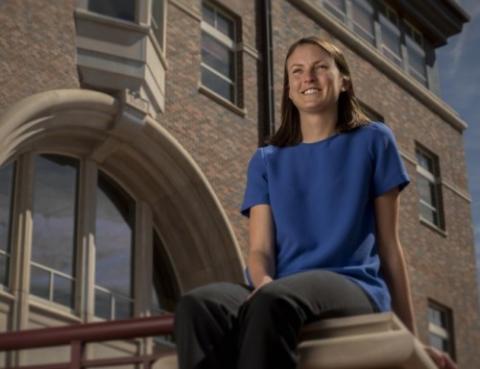 Though her time in law school has been rewarding, academic success isn’t something Steefel takes for granted. She had trouble with reading as a young student, she says, and if not for the resources and attention she received in her public elementary school, she would not have been as successful. “I later realized my positive experience in school was not the case for every student who struggled like I did,” she says. “Ultimately, my experience struggling to learn as a young student was the reason that I decided to go to law school.”

Steefel’s work at the Sturm College of Law has been directly influenced by her desire to advocate for education. “Recognizing the disparity in the resources available to different schools, and the disparity in how students are treated in school, drove me to want to work to change those inequalities,” she explains.

She created the Education Policy and Advocacy Group to bring together students who are interested in the ways in which legal issues intersect with the world of education. Members also engage in volunteer work, specifically on projects that, as Steefel puts it, “allow law students to get out of the classroom and actually work with kids.”

Her extracurricular activity doesn’t end there. Steefel also organized a monthly lecture series, featuring guest speakers from the law school and community, on the topic of racial justice. Student small groups then met throughout the semester to keep the conversation going. They continue to talk about what they learned from each keynote speaker. Indicative of her efforts to connect her learning with real-world change, Steefel and her peers developed The Pledge for the Public Good, which has now been signed by more than 60 faculty members. In doing so, they commit to discussing the social context of cases in their classes.

With so many experiences, it seems like Steefel might have a hard time choosing which was her favorite during her three years at Denver Law. However, she says that participating in the Public Interest Litigation Lab is a highlight. In that yearlong program, students work on actual public interest litigation and attend seminars relevant to public interest lawyers. “Getting hands-on experience with the necessary support and guidance from faculty stands out in my mind,” Steefel says.

After graduation, Steefel will take her interest in public advocacy to the state government, where she will clerk for Justice William W. Hood, III of the Colorado Supreme Court. Steefel says it will be the first step in a career she hopes will continue the work related to civil rights, educational and criminal justice she began at the Sturm College of Law.