Documentarian Trains His Lens on a Media Pioneer 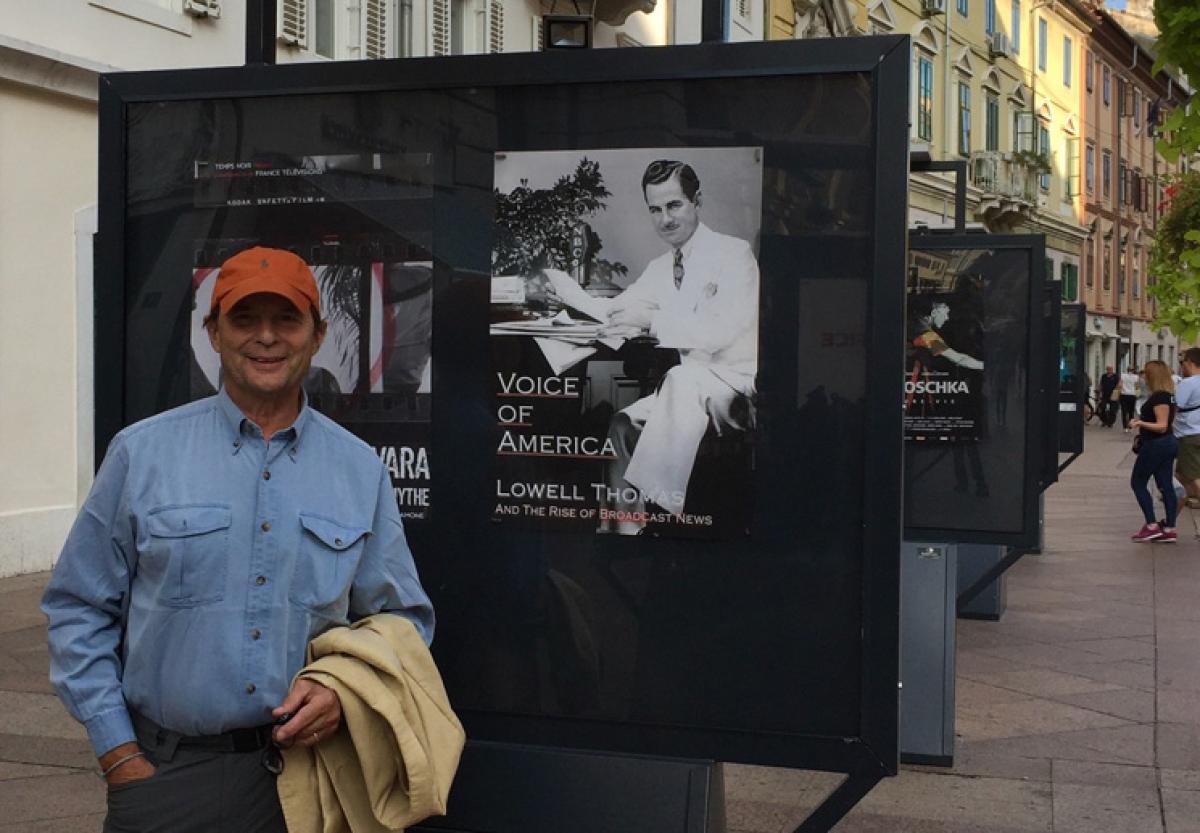 After all, in creating his latest production, “Voice of America. Lowell Thomas and the Rise of Broadcast News,” Moulton journeyed far and wide, through time and across continents. Along the way, he surmounted some high-altitude challenges and experienced no shortage of serendipity—all in the interests of recounting a story with ramifications for the current media landscape.

“He was really ahead of his time with what he created,” Moulton says of his subject, the fact-chasing, adventure-savoring DU alumnus and broadcasting pioneer known for hosting the first nightly national news program on radio. Lowell Thomas also made history and headlines by introducing, via a multimedia program, Lawrence of Arabia to audiences on both sides of the Atlantic, by narrating Twentieth Century Fox’s much-respected newsreels, and by trekking into forbidden Tibet months ahead of the Chinese invasion of 1950.

“[‘Voice of America’] really traces 20th century journalism and brings it up to date,” the Vermont-based Moulton says of his film, which has been playing at film festivals around the country. On one evening in early November, it also screened on campus, as Moulton returned to DU at the invitation of University Libraries and the media, film and journalism studies department. In keeping with DU IMPACT 2025’s emphasis on sharing knowledge and building community, the libraries periodically host programs that foster discussion about topics of relevance.

In addition to screening “Voice of America,” a copy of which he has presented to the University, Moulton shared trade secrets with the DU community. Speaking to Sheila Schroeder’s Introduction to Field Production and Editing course, Moulton told how he’d carved out his own path in filmmaking. “Rick Moulton’s visit … was filled with advice, anecdotes about his filmmaking career and his relationship with Lowell Thomas. His advice to meet new people and connect on a human level to those around you is great guidance for careers and for life in general,” Schroeder explains.

In Thomas, Moulton found a subject with a scene-stealing biography. Thomas grew up in the mining town of Victor, Colorado. He went on to earn two degrees from Indiana’s Valparaiso University, two from DU and one from Princeton. He followed his years in academia with a radio and television career that made his signature “Good evening, everybody” and his reassuring “So long, until tomorrow” part of daily life in households across the country.

Moulton’s interest in Thomas arose when he was filming “Legends of American Skiing,” released not long after Thomas’ 1981 death at age 89. In exploring one of Moulton’s personal passions, the film meshes oral histories with archival footage to tell the story of key figures in the sport’s rise to prominence.

“Lowell Thomas was one of the ski pioneers,” Moulton explains, noting that Thomas spent three decades traveling to ski resorts around the country, from which he delivered his radio broadcasts. “He pioneered remote broadcasting to pursue traveling, not to be tied to the studio. He broadcast from Stowe [Vermont] before there were any lifts at Stowe. And he broadcast from the Wheeler Opera House at Aspen before there were any lifts put in at Aspen. And he would use the place he was broadcasting from as a showplace. ‘I’m here at the Wheeler Opera House in Aspen, Colorado,” Moulton says, summoning his best Lowell Thomas imitation.

In the five years it took to make the documentary, Moulton filmed interviews with famous news anchors Dan Rather and Tom Brokaw. He collected hours and hours of archival footage. And when possible, he followed Thomas’ footsteps, recreating, for example, a large portion of Thomas’ arduous trek through the Himalayas to Lhasa, the holiest city in Tibet.

“We wanted to really know what it was like for Lowell Thomas to be on that three-month trek into Tibet — that he almost died in. So we followed his route,” he says, noting that his team was detained by Chinese border officials for 18 hours while they investigated the film crew’s paperwork.

Moulton never received permission to recreate the full journey, but he found traces of Thomas everywhere, even where they were least expected. With time to kill before their flight home from India, Moulton and his team decided to visit Darjeeling and stay in the historic Windamere Hotel. “It had nothing to do with Lowell Thomas. We said, ‘Oh, there’s an old colonial hotel built in 1840; let’s go stay at that.’”

But Thomas wasn’t so easily relegated to the back burner. “We get to the Windamere,” Moulton recalls, “and they said, ‘Oh, we have a Lowell Thomas suite, because Lowell always stayed here when he came to India and was going to the Himalayas. If that wasn’t enough, they took us to see their library. They had a pretty decent library for mountaineering. It was called the Lowell Thomas library.”

In addition to acquainting viewers with Thomas’ indefatigable pursuit of the news, Moulton hopes his film will educate audiences about the role journalism plays in informing the public, about its urgency in a democracy. It’s a timely look at one journalist’s drive to deliver information and a reminder that so much of what we know comes from the media, Moulton says.

“When it’s called ‘the enemy of the people,’” he says of the mainstream media, “it might be worth it to look at the value that it has been to this country.”