Candi CdeBaca (BS ’09, sociology; MSW ’09, social work) is co-founder and executive director of Project VOYCE, a nonprofit that mobilizes and trains Denver youth to work on problems in their schools and communities. Her goal is to prepare kids from Denver’s poorer neighborhoods to claim their seat at the table when it comes to the city’s future.

Last week, CdeBaca wrote an opinion editorial for the Denver Post about growing concerns over the transformations taking place in Denver’s oldest neighborhoods. She also recently took time to discuss with the DU Magazine her work with Denver’s youth.

Q: What is the mission of Project VOYCE, and how did it get started? 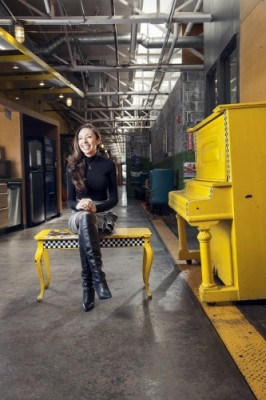 A: Project VOYCE emerged from the shutdown of Manual High School, and that was the high school I went to. When I was a student there, they were experimenting with reform, and they turned a small high school into three schools within a school. Communities didn’t have a voice in it, students didn’t have a voice, and it started the decline of that school as a traditional high school. In 2006, when I was in my second or third year of college, they were trying to shut it down, and it was going to be the first high school shutdown in Denver. So I started organizing community and students to file a class-action lawsuit against the district, and that’s how Project VOYCE got started. Since we became that entity, we’ve been pulled into a lot of policy conversations, so it’s gone beyond education. Now we train, employ and organize youth in different justice areas. We do economics and housing, education, environment and health. We’re kind of the youth-civil rights organization of our city.

Q: What are some of the bigger community issues the organization addresses?

A: Our “Ditch the Ditch” campaign is about the proposed I-70 expansion between Colorado Boulevard and Brighton Boulevard. It’s right in the middle of most of our youths’ community, and the proposed expansion is an environmental, a health and a civil-rights concern. We’re teaching our youth how to go through different avenues to address the issue. We’ve had town-hall meetings, we’re organizing at the community level, and we’re currently pursuing the avenue of litigation. We’ve sued the Environmental Protection Agency, we have been part of a lawsuit against the city, and we’re about to launch a lawsuit against the state. Our other campaign right now is “Our Community’s Not for Sale,” which is an anti-gentrification and anti-displacement campaign.

Q: How do you hope that being part of Project VOYCE will affect the lives of these kids as they grow up and enter the workforce?

Q: Project VOYCE got started at DU. Was there a correlation between what you were studying and the way this all began?

A: I made everything I studied at DU align with what I was doing in the community so that it would be easier to finish school while I was doing what I cared about. As an undergrad I majored in sociology and urban studies, so I was learning about social inequality, people in context and how to plan effective cities. And that translated directly to what I’m doing now. In my master’s program, I was studying social-work macropractice, which was organizational development policy and advocacy. What I’ve been able to do is blend my majors and my concentrations to design an organization that essentially gives the same education to a young person before they even get to college.

Q: You were born and raised in Denver. How do you feel about the way the city has changed in the last five or 10 years?

A: I feel torn about how Denver is changing, because I feel like this is a city that’s slowly slipping away from the people who built it. I think that’s been a tradition of the West since the Gold Rush, since Manifest Destiny. There has been a legacy of people coming who are attracted to something and think that they’re entitled to take space, to take land, to take jobs and run with it. Run with their entrepreneurial spirit and turn it into something. There’s this history and legacy of that here in the West, and I think that Denver as a city has failed to cultivate the native leadership that it should have. I moved away both to the West Coast and the East Coast, and when I came back to Denver, I came back because of the narrative that you hear about Denver. And the narrative is that we’re innovative, we’re cutting-edge and we’re progressive. But when you get here, you see that there’s a lot more underneath that narrative; that’s not completely true. I think that if Denver doesn’t learn how to balance the growth with the awesome things that brought people to this city, it’s going to very quickly be unsustainable. The growth won’t continue, and in fact I think people who are accustomed to more diverse, forward-thinking places will want to leave.

Q: Are you inspired by the youth who take part in Project VOYCE and the people who want to lead and make a difference?

A: Absolutely. When I came back to Denver in 2014, it was more out of need than a desire to be a part of this cool city that people were attracted to. I came back because I saw the need to really go into the communities that were struggling and equip them with what they need to be a part of the growth and the advancement of this city without getting left behind. My whole career is devoted to making sure that people who should be inheritors of this city have that opportunity. This is their inheritance.