Regan Linton, who received a master’s degree from DU’s Graduate School of Social Work in 2010, made theater history this fall when she became the first person in a wheelchair to be named artistic director of a major U.S. theater company.

And it makes perfect sense that the company in question is Phamaly, a Denver-based professional troupe that produces plays and musicals cast entirely of performers with physical, cognitive and emotional disabilities. It’s a company that Linton first encountered in 2005 as a longtime actress looking to return to the stage after a severe spinal cord injury. 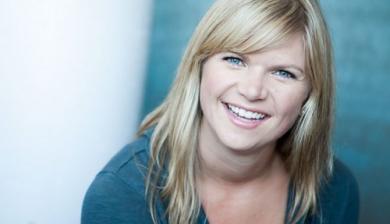 “I’ve always performed — I was in musicals in high school — but in college I discovered theater for social change: doing theater in a way that is not just entertainment but can also make a social impact,” Linton says. “Then when I was injured, it was kind of like this weird blessing in a way. It was like, ‘I see a greater purpose here.’ I’ve been given a greater purpose by virtue of what my body is now, and I’m creating social change just by getting on stage. Acquiring a spinal cord injury changed the nature of how I engage with theater and what I see the purpose of theater to be.”

She discovered part of that purpose at DU, where her interest in social work found its truest expression through her passion for theater. A performer with Phamaly while she was in grad school, Linton began to see how the two fields were connected.

“One of the biggest things that I discovered was that social work was largely about empathy and being able to put yourself in someone else’s shoes, and that’s exactly what I do as an actor,” she says. “I made the connection that in some ways theater can be social work — it is one of the greatest forms of creating empathy.”

As artistic director, Linton will oversee Phamaly’s 2016–17 season, which opens Oct. 21 with “James and the Giant Peach,” a musical extravaganza that the company will tour to Colorado schools after three performances at the Lakewood Cultural Center.

“Roald Dahl is beloved by many of us who grew up reading him and reading his books. They’re just wildly inventive,” she says of the “James and the Giant Peach” author. “Anything that’s creative in that way always gives us a unique opportunity. Our actors have different kinds of bodies and different minds; they work differently, so it gives us a lot of fodder to use for what you’re going to see on stage — how things are costumed, how things move, how things work. It’s already shaping up to be a really fun, creative adventure. It’s something that engages your imagination, which is nice especially now, when we’re so surrounded by screens and technology.”

The current season continues with holiday production “Tiny Tim’s Christmas Carol” in December; George Bernard Shaw’s “Pygmalion” in February and March; and “Peter Pan” in summer 2017, plus a staged reading of Shakespeare’s “A Midsummer Night’s Dream” in May. They’re all shows that Linton is excited about, though they were chosen by her predecessor. Her new duties include selecting shows for the 2017–18 season, as well as finding new ways for Phamaly to collaborate, both with other theater companies and with disability organizations. She also plans to look for opportunities to advance the company’s professionalism and artistic quality.

“Phamaly started out as an amateur company and progressively has gotten more and more professional,” she says. “You have some actors who have a day job and they just love to perform, but you also have actors who really are interested in a professional career. So I’m going to be facilitating education and professional workshops and things like that.”

Linton’s yearlong appointment is temporary for now, but even if she doesn’t become the company’s permanent artistic director, she says, she is glad Phamaly took the step of putting a person with a disability at the helm.

“I think it is a really big step and an important step that Phamaly has chosen somebody with a disability to be in this role,” she says. “Phamaly was founded by people with disabilities, and they weren’t looking for anyone else to do it for them — they did it themselves. I think that makes a strong statement. If you’re going to have a Latino theater company run by a white person, that doesn’t make a lot of sense. Regardless of whether I stick around, I hope Phamaly will keep that tradition of keeping somebody who is part of the disability community in a leadership role. It’s really exciting.”