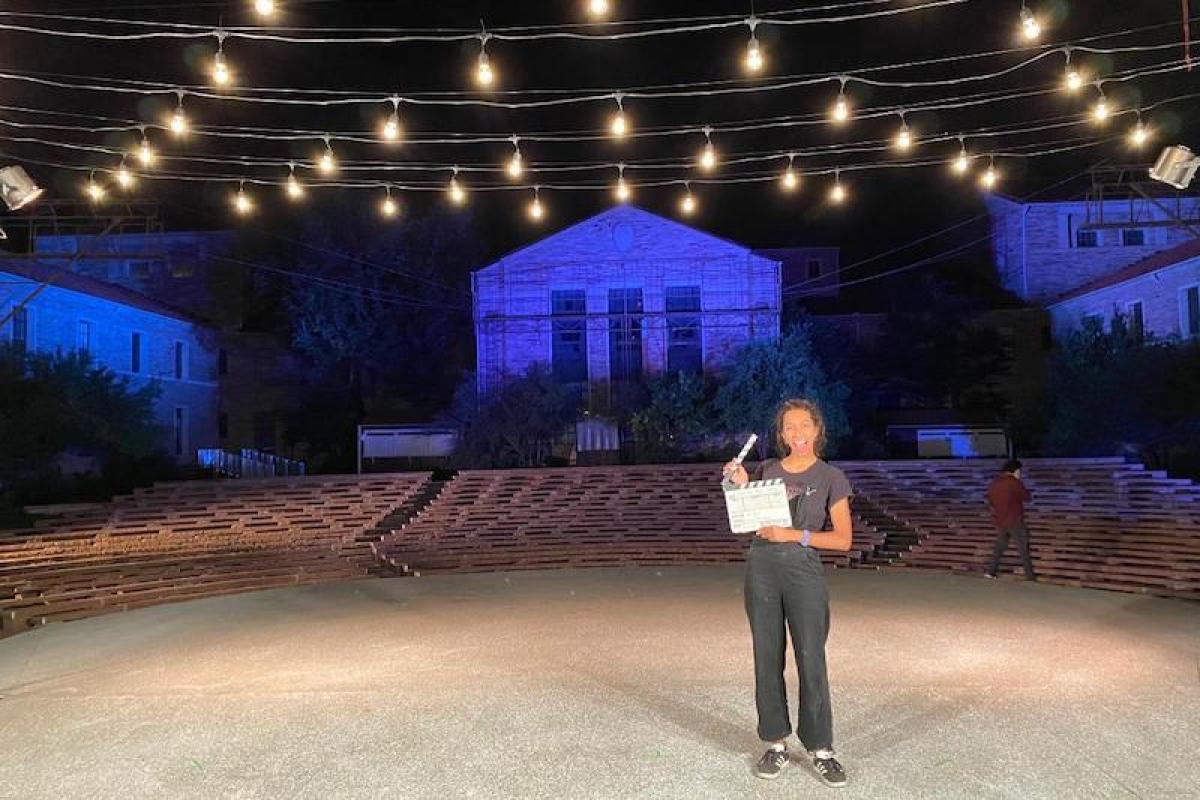 Nelson on the set for CSF's "Much Ado About Nothing"

As a theatre and English double major, Tamarra Nelson (BA ’18) discovered her passion for directing at the University of Denver. Now, Nelson works as the tour manager with the Shakespeare and Violence Prevention Program, a subsection of the Colorado Shakespeare Festival (CSF) Education Department.

In this program, actors travel to schools, perform plays and facilitate workshops based on up-to-date violence-prevention research.

“It’s centered around this idea of leaving behind a bystander identity and becoming an upstander. We teach kids that if they see a situation where a peer is getting bullied, they can step in to prevent harm rather than just being bystanders and watching it happen,” says Nelson.

With COVID-19 restrictions this year, the program has gone entirely virtual. In August, CSF pre-recorded all of their performances, which they now send to classrooms via Zoom.

Even though there are challenges with having their program in virtual format, Nelson has found benefits to being online as well.

“One of our goals is to visit every single county in Colorado over the next ten years. One of the advantages with being entirely virtual is that suddenly travel logistics aren’t a barrier anymore. Before, we’d have to book multiple hotels, get the van together, pay actors to stay overnight and things like that. But now it’s just as simple as Zooming into a classroom. So that’s removed that barrier, allowing us to reach more rural areas than we’ve been able to before,” says Nelson.

So far, they’ve visited 14 counties, which is about 20% of all of the counties in Colorado. This is their second year with this initiative, and now more than ever they’re finding the importance of bringing this program to schools.

“Specifically in Colorado, where we have such a history with school violence, we don’t want distance to be a barrier in terms of getting kids access to this program,” says Nelson.

Nelson isn’t the only DU alumna that has worked with CSF. Rhianna DeVries (BA ‘19) worked with them last year as an actress. Also, Associate Professor of Theater Anne Penner, acts at CFS and has been in main-stage productions.

“I’ve spent a lot of time with Anne because she was an actor in ‘Romeo and Juliet’ last summer, and I was a PA for that production. She’s just been super helpful in terms of shaping me as an actor. Even though acting isn’t something I want to pursue, she’s helped me understand acting as a director and shaped my experience that way,” says Nelson.

These and other connections at DU allowed Nelson to land the role she has now with CSF.

“Steven McDonald, who’s the chair of the Department of Theatre right now, is the reason I have the job at CSF. He connected me with the associate artistic director and set up a coffee date for us; she then recommended me to the education department when a position opened,” says Nelson.

Not only did McDonald connect Nelson with her current position, but he taught her practical skills during her time at DU and has remained an important resource.

“He taught a class for theatre majors that involved building scenery, hanging lights and things like that. I really had a good time and it gave me a lot of useful skills. In the theatre world, there may not always be directing jobs, but there’s almost room for another person in the scene shop for somebody who can just hammer a nail into a wall. So because I have that experience, I feel super prepared now if I ever need a job again.”

Professor Rick Barbour and Associate Professor Greg Ungar also made an impact on Nelson’s career. Nelson served as the assistant director for Barbour’s production of “Pericles.” This experience  opened Nelson’s eyes to directing.

“When I set out to be the assistant director, I had a cursory interest in directing, but after watching Rick work and doing the projects that he gave me on the side, there was no doubt in my mind that that’s what I wanted to do,” says Nelson.

Nelson attributes many of her skills and interests in theatre to her time at DU. Not only did she gain skills that have been practical in her job and everyday life post-graduation, but she has connected with faculty members that have remained resources and inspirations for her future in theatre.

“I couldn’t have asked for better mentors; they are all so great. I know if I had a question that they wouldn’t hesitate to talk to me and grab lunch, or virtual coffee now. I feel like their doors are always open. They’re all great resources and continue to be great resources for alumni,” says Nelson.