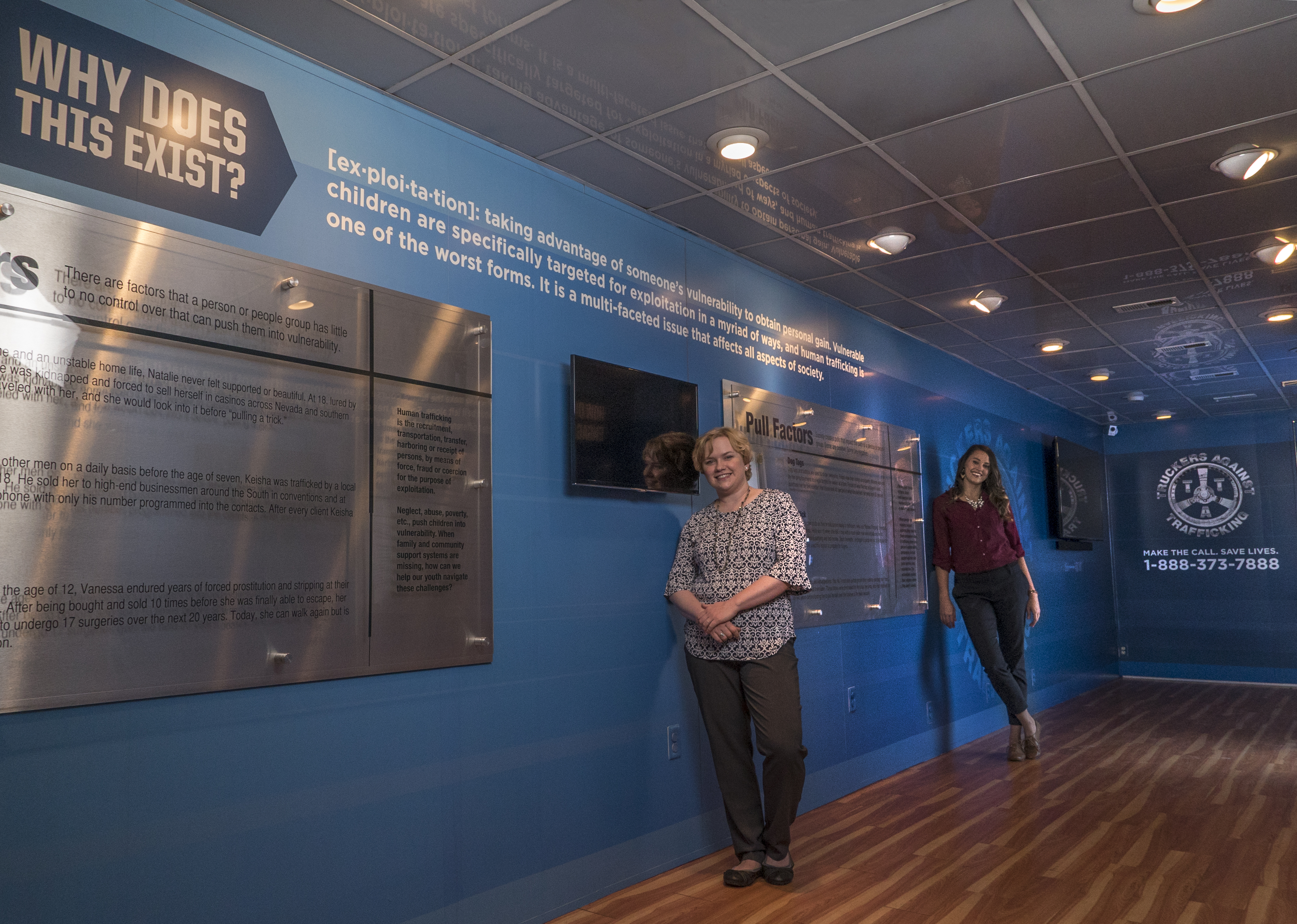 Putting the brakes on human trafficking won’t be easy. And it won’t happen overnight.

But that’s no deterrent to Laura Cyrus and Michelle Bishop, two University of Denver alumnae who have brought their passion, stamina and DU educations to the challenge. They’ve both worked with Truckers Against Trafficking (TAT), a small but growing nonprofit organization based in Englewood, Colo. Founded in 2009, TAT aims to address the commercial sex trafficking that can occur at truck stops, road-side facilities, hotels and motels. It does so by educating, empowering and mobilizing members of the trucking industry — “the eyes and ears of our nation’s highways” — to recognize the signs of trafficking and to combat it through the normal course of their jobs.

In scope and scale, the problem of human trafficking — whether for forced labor or commercial sex — boggles the imagination, Cyrus and Bishop say. And the available data bears them out. In fact, the nation’s top law enforcement agency considers human trafficking to be the third-largest criminal activity in the world.

“Here in this country,” the FBI explains on its website, “people are being bought, sold, and smuggled like modern-day slaves, often beaten, starved, and forced to work as prostitutes or to take jobs as migrant, domestic, restaurant, or factory workers with little or no pay.”

At Truckers Against Trafficking, Cyrus (MA ’14) works as administrative specialist, handling everything from data development to technology. Until recently, Bishop (BSBA, IMBA ’10) served as the organization’s program coordinator, working to build its capacity by developing partnerships and sponsorships. Both came to the organization convinced they wanted to play a part in reducing human trafficking.

“Once I learned what was going on, there was no turning back, quite honestly. I knew that I had to do something about it,” says Bishop, who completed DU’s dual-degree program in international business.

After hearing a missionary speak on the topic, Cyrus, too, felt compelled to learn more and take action. She already had a degree in criminal justice and women’s studies from Michigan State University, but, in search of specific education around trafficking, she pursued a graduate degree at DU’s Josef Korbel School of International Studies. The Korbel School is home to the Human Trafficking Center, which aims to raise public awareness about the problem and to provide research to influence public policy.

“I felt this weight,” Cyrus says, describing her reaction to initial information about the problem’s extent. “This is what I need to do.”

The more she learned, the more concerned she became about widespread complicity in the problem. Upon reading an article about how, in Los Angeles, victims of labor trafficking were making dresses sold at a national department store, she decided to rethink a lot of her decisions. “At the time, as a young professional, I was shopping there. And thinking, ‘Oh my gosh. I could have purchased one of those dresses. Do I know who is making my clothes? Do I know who is picking my coffee, producing any of the goods that I’m using?’ That was a real gut check.”

Through her work, Cyrus wants to trigger that same gut check in truckers. Do they know what’s going on in the rig parked across the lot? Do they know why that teenage girl is lurking around?

Educating drivers is key to triggering the gut check, and with that in mind, TAT produces training materials for the 7-million-member trucking industry. It also works to build partnerships with trucking associations, schools and suppliers. Through a partnership with the Truckload Carriers Association, for example, the organization offers a TAT certification. Each Certified Trucker Against Trafficking, Bishop and Cyrus agree, can then spread and magnify the word.

As Cyrus notes, TAT disseminates its materials for free. A TAT DVD shows drivers how to spot sex trafficking along the road, while specially produced webinars reinforce the message. The organization’s most visible tool is an eye-popping mobile exhibit, the Freedom Drivers Project, that’s housed in a semi-truck and that introduces drivers to the magnitude of the problem while showing them how to recognize trafficking.

Once truckers have learned to recognize trafficking, Bishop explains, TAT shows them how to take action. It produces wallet cards, decals and posters that advertise a national hotline for anonymously reporting suspected sex trafficking. Another poster campaign uses photographs taken by a victim of human trafficking. These posters speak to other victims, letting them know that help is just a phone call away.

Cyrus and Bishop note that TAT’s success is reflected in calls made to the hotline, operated by the National Human Trafficking Resource Center. Between December 2007 and the end of June 2016, truckers made more than 1,400 calls to the hotline. These calls reported on 452 potential cases, involving 992 potential victims — 270 of whom were minors. And, according to TAT’s promotional materials, one of those calls, made by a single driver who witnessed something suspicious, led to the shutdown of a 13-state child-trafficking ring.

That something suspicious could be a curtained RV parked for an improbably long time at a truck plaza, with men coming and going at periodic intervals. It could be a disheveled minor wandering between big rigs. “We’re asking [truckers] to look for two main things. Any time you see a minor who appears to be engaged in selling commercial sex, or anyone — regardless of age or gender — who looks like they’re under the control of a pimp, make a call to the national hotline,” Cyrus says.

“We’re trying to get drivers and others in the industry to say, ‘Something else might be going on here,’” she adds. “‘Is this person being coerced or forced into this?’ Instead of just closing their eyes to what’s going on around them, we’re trying to get them to empathize, to say ‘Hey, I might be the only chance this person has to get out.’”

Cyrus concedes that theirs is an uphill haul. Should she ever feel overwhelmed by the problem’s persistence, she calls to mind some cautionary remarks from Claude d’Estree, director of the Korbel School’s Human Trafficking Center.

“Don’t think that you’re going to end this in your lifetime,” Cyrus says, paraphrasing d’Estree’s comments to one of her classes. “This problem is just so huge; it’s been going on since the beginning of time. Do every little bit that you can do every day. Do your best. But don’t burn yourself out trying to end the problem today.”