DU Carillonist Doing ‘All Too Well’ in New Position 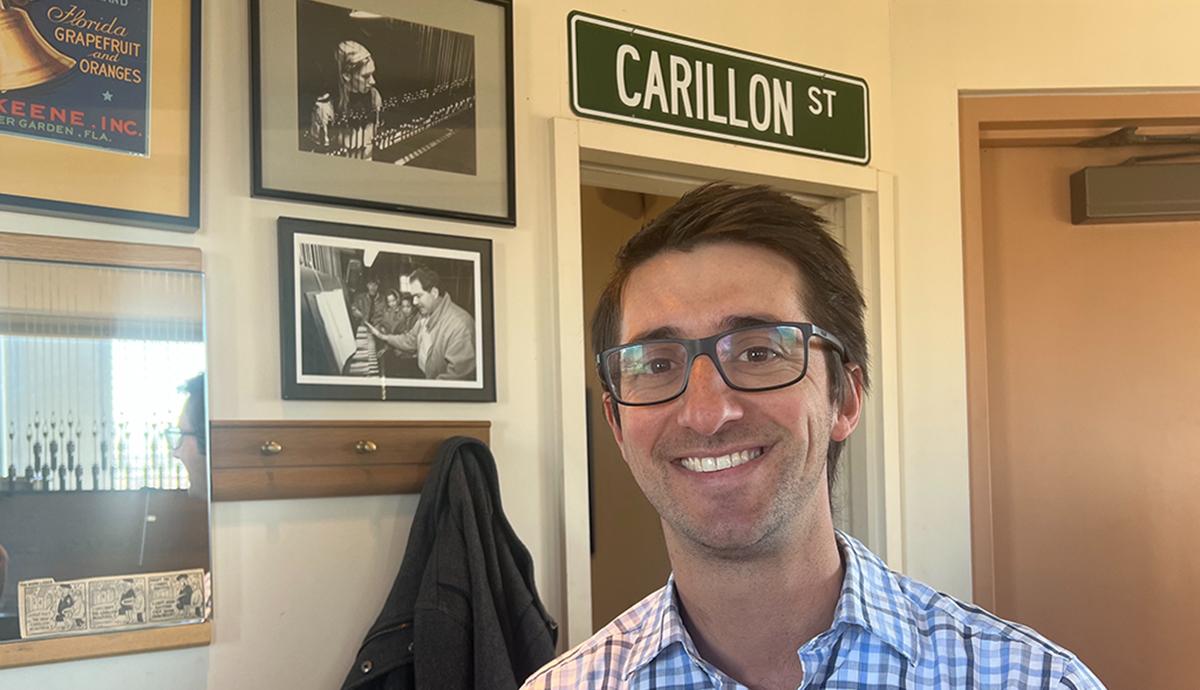 Joey Brink has been on the job as the University of Denver’s resident carillonist for fewer than six months, and he’s already arranged a piece of music from an artist college students consider a favorite: Taylor Swift.

At the request of a DU community member, Brink played the 10-minute version of Swift’s “All Too Well” on the bells this past quarter, letting the singer-songwriter’s heartbreaking melody ring out across campus.

Taking song requests is just one of the many ways in which Brink serves the campus. He’s also an adjunct professor at the Lamont School of Music and plays the bells every day at noon, with songs ranging from classical to pop to rock music. On the day Queen Elizabeth II died, he played “God Save The Queen.”

“When it's cloudy and rainy, I'll play dark and brooding music,” Brink says. “I won't play ‘Here Comes the Sun’ if it's storming outside.”

Brink wants the DU community to know that whenever they hear music coming from the carillon, located in the Carl M. Williams Tower atop the Daniel L. Ritchie Center for Sports & Wellness, it’s always a person playing.

“A lot of people think that it may be automated, or that there’s a computer up there,” he says.

But no—unless it’s just the hourly chiming of the bells, there’s always someone in the tower, their hands and feet working the keys and pedals of the giant instrument.

After climbing more than a hundred stairs to the tower’s top, Brink sits on his bench and changes his shoes. There’s no such thing as specialized carillon shoes, he says.

But, he says, lacing up his brown sneakers, “I want a shoe that’s narrow and not too thick on the bottom, so I can feel the pedals, and I’m not going to [accidentally] play two notes at once.”

A carillon works somewhat like a piano, with “black” and “white” keys on its keyboard and a separate pedal keyboard. Each key and foot pedal has a corresponding bell, and the harder you press a key or foot pedal, the harder a metal clapper hits the bell, resulting in a louder sound.

The DU carillon’s smallest bell, which plays the highest note, weighs just 20 pounds. The largest bell weighs in at a whopping 12,000 pounds. Playing the lower notes takes a notable amount of arm and foot strength.

Brink’s journey to the Williams Tower was neither linear nor planned. He initially took an interest in the instrument at Yale University, where he tried double majoring in music and engineering before deciding to focus solely on the latter. Brink learned and played the carillon as an extracurricular while obtaining his degree.

Even when his talent garnered him a scholarship to study carillon in Belgium, Brink still assumed he’d eventually return to engineering.

“I still thought, like, ‘OK, this is a gap year between engineering [gigs]. This is going to be my gap year to do music full time for a year,’” he recalls.

And that’s what happened. After Belgium, Brink journeyed to Utah to begin a PhD program. But he missed the music, so he continued to play the carillon, traveling around the country every summer to play guest concerts. Eventually, Brink began a fellowship with NASA through his doctoral program. Everything was going to plan.

That’s when he entered the prestigious Queen Fabiola Carillon Competition in Belgium—and he won, making him one of just two Americans to ever claim the title.

“It made me realize I was good enough to apply to carillon jobs,” he says. “And so I was getting booked up [for performances]. I had my whole summer, like three months, booked. And I was like, ‘Sorry, NASA, I gotta leave for three months.’”

He ended up declining his NASA fellowship, leaving school with a master’s degree—and embarking on a big risk.

“I thought, ‘OK, I'm going to give myself a year,’” Brink says. “This is my plan: I give myself a year to try to support myself financially with just bells, if I can do that within a year. If not, then I'll go get an engineering job.”

The rest is history. Brink completed a carillon internship in Florida before accepting a teaching job at University of Chicago, where he stayed for seven years, garnering national attention when he played Drake’s “Hotling Bling” on the bells.

Brink has been at DU since September, and he wants the community to know that anyone can pick up the carillon—even if they don’t have a musical background. He teaches carillon classes at Lamont, which offers bachelor’s and master’s degrees in carillon.

“Most of the students who take carillon lessons, [who] are not are not majoring in or getting a master's degree in carillon, they’re usually studying something else, primarily,” Brink says. “They want to have some kind of musical outlet, and this can be their musical outlet. That’s kind of how it goes for most students across the country. And some of them will end up falling in love with it more than they expect to; and becoming a semiprofessional carillon player on the side is a very easy thing to do, and a really rewarding thing to do, too.”

Brink will play alone and with other DU carillonists at 3 p.m. Sunday, Dec. 11, at Lamont’s free Holiday Carillon Recital. Attendees will listen to the bells from the lawn of the Ritchie Center—so bundle up and bring chairs and a hot drink to savor the sounds of the season, courtesy of DU’s one and only Joey Brink.